The earth-shattering sound of dynamite welcomed us to the small village of Lath, which sits on the edge of an open-cast coal mine.

The 30 or so people gathered around the centre of the village didn’t flinch, though, not even the small children. They’ve become used to the sound of explosives blasting the earth open since India’s largest coal producer, South Eastern Coalfields Limited (SECL), built the mine on their land in 2003.

It was hard to believe looking at the layers of black pits that sink deep into the earth that this land used to be rice fields where cows roamed before the trucks transporting coal arrived.

Lath village also used to be home to 400 Adivasi families. Adivasis are India’s indigenous people, of which there are many different tribes. People in Lath are from the Kawar tribe. We could see signs of Adivasi culture. The older women wear the traditional Indian sarees without a blouse, using only the shawl of the saree to cover their chest. Their arms and faces are often covered in tattoos of tribal patterns, depicting trees, nature, animals – all things they consider sacred.

The huge tree in the centre of Lath that serves as the village’s meeting place has many colourful threads tied around the base of its trunk. The villagers worship the tree. Adivasis make up 8 percent of India’s population of 1.25 billion, but more than 50 percent of the more than 20 million people displaced by mining and other industrial projects since India’s independence in 1947.

That’s because they live in India’s forests, which we now know to be rich in minerals. Only 56 families remain in Lath after losing their land, livelihood – they were farmers – and access to clean water, which the coal mine has cut off.

Lath resident Omkhar Singh Rathia, 22, guided us on motorbikes to get to the river that’s now on the other side of the coal mine. When we arrived at the point at which we had to walk, so too had SECL’s security guards. Only they didn’t seem eager to wade through the long muddy path to stop us. We were thankful the monsoon rains hadn’t started for the day, but it meant we were drenched in sweat from the humidity.

We walked for 30 minutes before we found the long metal pipes carrying waste from the mines. They end abruptly at the cliff that drops into the river. We could see the muck along the river’s edge.

“Half our life is dependent on the river. We catch fish in the river. We use the water for washing, cleaning. It’s basically our lifeline,” Rathia said.

“Many people left the village because of that [losing access to clean water], but we stayed on and we’re still fighting.”

Indian law requires consent, compensation and rehabilitation in the case of displacement. There are additional laws to protect Adivasis’ rights to land, given their special status as India’s indigenous people who have historically been marginalised. When we went to meet Chhattisgarh’s mining secretary, Subodh Singh, in the state government’s building, we walked through open spaces and corridors filled with sculptures and statues of Adivasis in their “natural environment” – men wearing loin cloths with horns on their head, beating drums; the women with chests exposed.

“We have one of the best rehabilitation policies in the country,” Singh said.

People in Lath showed me paperwork from SECL listing them as working at the mine – providing “rehabilitation”. But it’s only on paper, they tell me. They don’t have jobs or an income.

Elsewhere in Raigarh district, we met another Adivasi, Fuleshwar Singh Sidar, 33, and his family, whose home was demolished by the Hindalco mining company in April for the expansion of a coal mine. His two-year-old daughter, Pihurani, was distraught when we arrived at the basic concrete structure that they are renting as their home. She thought we were from the mining company. Pihurani’s mother Gita said the toddler has become afraid of strangers, as she boiled spinach for lunch, with a few browned onions for garnish. The Sidars told me they didn’t consent to their home being demolished and they weren’t compensated for it.

When I asked Sidar if Hindalco had offered him a job, he said, “No, but even if they did, how can I work for someone after they demolish my home? Where is the dignity in doing that?”

Sidar and his cousin Gopichand took us to where they used to live, a few kilometres away. We drove through farmland and rice paddies before we arrived at what is now a site that’s being cleared for mining. Two female private security guards paced the area and got on their phones after seeing us.

“That’s where our house used to be, to the left of where that mango tree is,” Fuleshwar pointed out. Gopichand’s home was further, where those coconut trees are.”

It’s his first time back to the land his family had lived on and farmed for generations. “It feels very strange to be here,” he said. “It’s very sad.”

Sidar spoke a lot about fighting for justice, holding the government and the mining company to account, and about the government’s talk of development when they’ve never had electricity. He was quiet on the way back.

Despite the growing number of mines, steel plants and power stations in Chhattisgarh, most of it is breathtakingly beautiful. We spent many hours every day driving through lush green forests and rice paddies; roads lined with poplar trees, mud houses with thatched roofs, road signs in Hindi reading “Beware of Bears” and “Elephants Cross Here”.

But the industrial presence is impossible to ignore. “Jindal” is the most visible word in the state. Signs everywhere carry the name of the multibillion dollar steel and power conglomerate.

I’ve never seen as much public art featuring Adivasis as I did in Raipur. But away from the city, we didn’t see the lifestyle that’s depicted in the art – living off the land, festivals celebrating the rain or seeds, traditional music and dance.

We were told we’d have to go to Bastar district in the south to see real Adivasi life and culture. That’s where India’s Naxalites, or Maoists, are running what’s essentially a parallel government to the Indian state.

On my last day in Chhattisgarh I met Rajendra Kawasi, 21, in Raipur’s Purkhauti Muktangan Museum. The Adivasi art student from Bastar was painting murals of tribal life on the museum’s walls. When I asked him if the museum was representative of life in Bastar, he responded: “The real Adivasi life is in the villages. This is for visitors.”

But with the Indian government and mining companies encroaching on Adivasis’ land and culture, we saw much more of their way of life in the city’s museums and sculptures than in what was once their land. 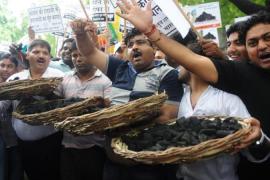 Supreme Court cancels 214 of 218 permits for coal mines allocated since 1993 after licensing process was deemed illegal. 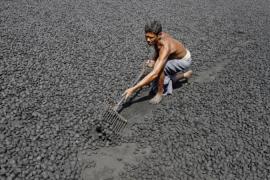