By Rashed Radwan and Carmen Marques

Baghdad, Iraq – Before the 2003 invasion of Iraq, the country’s national grid supplied the capital, Baghdad, with between 16 and 20 hours of electricity each day. But more than a decade after the fall of Saddam Hussein, electricity supplies have dropped to an average of only one hour of power for every four hours of the day – that’s six hours over a 24-hour period.

Hadi is known as the “generator man”. He makes a living supplying others with electricity.

“Iraq is a very rich country, but life here is very difficult,” he says. “We don’t have the basic necessities covered to live with a minimum of dignity. Electricity is one of our biggest problems. The lack of energy doesn’t let Iraq move ahead. It’s a weird situation. We have so much oil but we don’t have electricity.”

A 10 amp domestic subscription to a private generator can cost anywhere between $60 and $100 a month. That’s a luxury few can afford. But Hadi has a licence from the government that allows him to run a generator and provide electricity to others. In fact, he has two generators.

When one of his customers calls, Hadi connects one of the generators to their fuse box. A tangled web of wires hangs overhead.

“When I switch them on, each one receives the amps according to the contract they signed – four amps, five amps, six amps, it depends,” he explains.

In some cases, more than one family will share the same fuse box, splitting as little as four amps between two households.

Too poor to pay

“My neighbours are like my family and I help them with everything I can,” he says. “Some families receive power for free because I know they cannot pay.”

One of his customers, an elderly lady, says the national grid gives her only one hour of electricity a day – and that can come during the day or the night. “You never know,” she says.

“Hadi saved me by giving me electricity for free,” she explains. “Two days ago, someone cut the wire and left me without electricity. Poor Hadi, he went crazy fixing it.”

Polishing her old sewing machine, she says: “This machine is so beautiful …. Once I sewed an abaya for 33 cents. It was a blessing. With this money I had enough to feed my family and live a good life. I remember when I spent nights sewing. I was able to sew 10 abayas in one night.”

“I survive as I can,” she adds. “It’s shameful to go in the streets asking for alms.”

Much of Hadi’s time is spent balancing the books. “Some [people] come here asking to delay payment because they have no money. Others just don’t want to pay and bring me the money 15, 16 days late, when I am about to cut off their power.”

“Some people … come and ask: ‘Why don’t I have power?’ I try to explain to them that maybe there is a problem with the wiring. They accuse me of cutting the wires.”

“People here have a lot of problems – debts, frustrations, depression – and the generator man is their punch-bag,” he reflects.

‘Life depends on God and the generator’

An old man who lives nearby complains about the noise the generator makes and the way it shakes the walls of his house. “Here life depends on God and on the generator,” he says.

A neighbour, Farid, says he doesn’t care about the noise because electricity is more important. “What do you prefer – to die from the heat or the noise of the generator?” he asks the older man.

“When I switch on the generator, people can have air conditioning or at least a fan,” Hadi explains. “They can renew the air in their houses, switch on the lights and leave the dark behind.”

Hadi’s wife shares his frustrations. “I feel very sad when I see other families going out for a walk with their children. Because of the generator, we can’t go anywhere because people will start complaining,” she says.

There is always someone calling with a problem – perhaps with the wiring or the fuse box – and Hadi must always be ready to solve it, whatever the time of day.

“Now, with two generators, my problems have increased,” he says.

Still, Hadi adds, “I don’t care because I feel good helping the people”.

Power cuts do not discriminate

Umm Ali is one of Hadi’s clients. “Because of the heat, the generator always stops,” she says.

She says she feels “sorry for the generator man”.

“It’s not easy on him. It’s difficult and harmful. The noise of the generator in the neighbourhood. It’s not an easy thing to do.”

But electricity is critical for women like Umm Ali. “The majority of Iraqi women work at home,” she explains. “But we need electricity. We cook food to sell. Others are hairdressers or tailors. All these jobs need power …. All the money we make goes to [pay the] fuel costs.”

For some, the power cuts can have even more serious consequences.

Noura and her mother are waiting for another round of physiotherapy at Baghdad’s children’s teaching hospital. Noura was injured in shooting between US troops and Iraqi forces. “Suddenly, Noura fell down,” her mother remembers. “Instantly, her legs became paralysed.”

But power cuts do not discriminate and all power to the hospital shuts down in the middle of Noura’s session.

“It’s normal, I always continue,” says Noura’s doctor. “It’s OK, it’s our job. And psychological support for the patient is more important than the treatment.”

Hadi feels the burden of helping his community more acutely than ever.

“I can’t rest, I can’t sleep. And people are always asking for more.”

“When I was a child, I dreamed of being someone important,” he says, walking along the narrow streets of his neighbourhood. “Circumstances didn’t allow for what we wished to come true.”

He tries to find a release from the broken dreams and constant pressure where he can. “I need to go for a walk once in a while, for fresh air, to the see the water, remember our heritage,” he reflects. “I don’t think you can find this in any other country,” he adds, looking at the city around him. 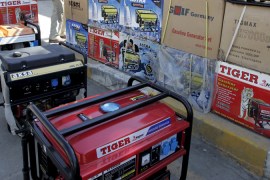 As Iraq’s national power grid struggles to provide electricity, a new form of entrepreneur has started to fill the gap. 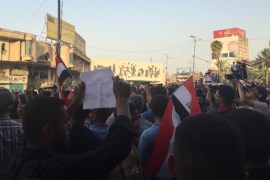 Protests over electricity shortages have turned to calls for an end to corruption and sectarian politics. 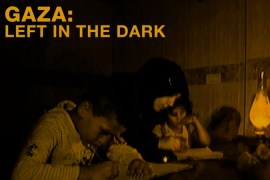