Athens, Greece – Eleni Peck and her British husband, Paul Peck, both 46, chose to raise their children in Greece rather than the United Kingdom.

The idea of Brexit wasn’t strange to them. Both of their countries’ potential EU departures have been in the news for a long time.

Brexit dominated the Greek media on Friday. After so much drama over Greece’s potential exit from the EU and its heroic efforts to remain in the bloc, it was British voters who elected to leave.

Following international trends, the Athens stock market plunged, and Greek tour agencies expressed concerns about whether the result would hurt the flow of British tourists.

According to a poll by the Research Unit of the University of Macedonia in northern Greece, 50 percent of Greeks are scared about Brexit. Around 28 percent believed it wouldn’t make much of a difference ultimately.

The Pecks have been watching the news from their two-bedroom home in Athens, but weren’t puzzled like so many others.

“My parents-in-law are thrilled,” Peck said. “My husband is content. He believes it’s for the best. Why should I be worried? The downside is the British will have to re-negotiate all their trade agreements but they have the tools and the power to do so. The Commonwealth had been successfully functioning for years so Britons think it’s about time they went back. Time will tell definitely if they are right or wrong.”

Peck also said that she thought it was about time the UK left the EU, and that Germany has been dominating EU policies that have harmed Greece and other countries.

‘An EU of the multinational businesses’

Talk of a possible Grexit first started in 2009 when the government was negotiating a bailout during its long-running debt crisis. The chatter increased every time harsh austerity measures were passed.

A year ago, Greek Prime Minister Alexis Tsipras announced a referendum on entering into a financial pact with its creditors, led by Germany, after six months of harsh negotiations with the European Commission, the European Central Bank and the IMF.

Back then, the question wasn’t whether or not Greece would exit the Eurozone, but whether the country should continue with the austerity measures its lenders demanded. Many feared a no vote would have also meant a Grexit. But the Greek people rejected the bailout conditions with a majority of 61 percent, and Greece remained in the Eurozone.

Later, Greece’s government announced early elections and changed its stance from rejecting the creditors’ conditions to accepting them. With an opposition damaged by two years of austerity, Tsipras won again and started implementing the measures in the hope that the EU’s obsession with austerity would diminish.

“The EU has taken a blow,” Tsipras said in a television address to the nation on Friday afternoon. “The decision is going to be respected, but it shows an identity crisis within Europe. The signs have been there for a long time. The growth of the far-right was the sign of this development. The mismanagement of the refugee crisis, the closed borders, the austerity, the denial of sharing responsibility had all shown the crisis within the European project.”

On the Athens subway this morning, many people discussed Brexit and a possible Grexit.

“I went to bed with the UK in the EU and woke up to an EU without the UK,” said Maria Krontira, a 45-year-old Greek teacher. “It is a shock. I don’t know what’s going to happen from now on. I’m afraid that other countries will follow. Of course the biggest fear is the rise of the far-right. Of course it’s the EU to blame for this. It missed its target from being a ‘Europe for the people’ to a ‘Europe for the multinational businesses’.”

‘Courage to go against the tyrants’

Greece’s extreme right-wing party, Golden Dawn, congratulated the British people “for their courage to go against the tyrants” with a televised message from one of its MPs. Golden Dawn has been highly critical of the EU for meddling in Greek affairs and permitting too much immigration into the bloc.

READ MORE: The night the UK became a little island

“Finally, the start was made,” said Panayiotis Kaklamanis, a retired 68-year-old taxi-driver who opposes the EU’s open border policy. “The EU must be destroyed. Those of us who believe in nation-states and borders aren’t fascists. The British voted in favour of their country and they did well.”

Kaklamanis said he supported Grexit. The EU has been a cruel master, he added.

“I wish we had the same power to do it ourselves,” he said. “Of course we’re not the UK, we don’t have such a strong economy, or patriotic politicians. If we decide it we can also leave. We’re poor and hungry now, we’ll be poor and hungry then. What’s the difference?”

With the Spanish elections next week and a possible win by the anti-austerity party Podemos, Tsipras is hoping that he’ll gain support.

“We need to directly change course,” said Tsipras in closing his speech. “Deep democratic changes are needed in the EU. We need to build a wall against the far-right. The technocrats’ speeches don’t touch the European people, but instead it infuriates them. We need a new vision, where politics will take over the economy and the technocrats.” 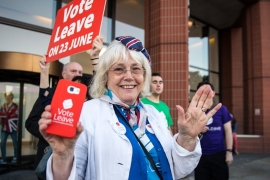 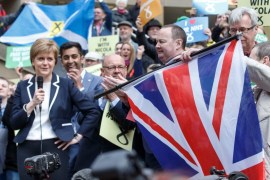