Kolkata, India – As I cross the road to reach the red-and-white post office on Kolkata’s elegant Park Street – a haven for the bookish and gastronomical lined with bookshops and restaurants – I notice the lone old man hunched over his typewriter, oblivious to the activity around him.

He must be in his 70s and is dressed in spotless white. His machine looks ancient, but it gleams.

Under the shade of a tree, he is typing neat documents for clients in exchange for a tiny sum.

The world’s last mechanical typewriter manufacturing company, Godrej & Boyce, which produced 12,000 machines in 2009 alone, closed down in Mumbai, India, in 2011. The warehouse has since been converted into a refrigerator-manufacturing unit.

But that didn’t quite sound the death knell for the typewriter.

Typists can still be found outside government offices and courts in India, sitting on rickety stools with their machines or perching them on wobbling tables. With plastic sheets for a mat, they sit under trees or on raised stalls. Their customers cram into tiny plastic tents or ramshackle shops for their services.

On their most productive days, they can earn 350-400 rupees (approximately $5). The rate is 10 rupees (15 cents) for an A4-sized piece of paper, and if copies are required, they charge 5 rupees (7 cents) more per copy, explained one who preferred not to share his name. “It’s easy to get a copy done. You just insert a carbon page between the A4 sheets,” he explains.

Despite this meagre financial compensation, the typists stick to their occupation, typing deeds, wills, applications, and agreements, because they know nothing else that can supplement their livelihoods – and they are passionate about their machines.

‘Somehow we manage to earn a living’

I meet Bhabatosh Das, 42, outside the High Court in Kolkata – one of 50 to 60 men of various ages who occupy the pavement adjacent to the building. They sit under blue sheets of plastic – their only shelter from monsoon rains or harsh sun, depending on what time of the year it is. On the other side are stalls and shops selling tea, juice and snacks for the odd jobbers, and spare parts – ribbons and clips – for their machines.

As his colleagues take dictations from advocates and junior lawyers, Das begins to speak.

He has been working from this spot outside the court for the past 22 years, he explains.

“Haven’t you ever tried to do anything else?” I ask.

“You bet I did,” he answers. “Several odd jobs, I even tried the Public Service Commission, which is a government-conducted examination, and if you pass that, you get clerical jobs at government offices. Nothing worked out, and I found being a typist fetched me enough to feed the family.”

“Why don’t you have a proper shed or office to work from?” I ask.

“We must stick around these court offices, else who will give us the work? The lawyers here have known us for decades. They know who to go to, to get work done. They have their favourites among us; it’s only for these professionals that we are still in business. Else who needs us, and who will bother to think for us?” Das replies.

They used to have an association that protected their interests, he explains. It was called the High Court Freelance Typists Association. But it dissolved about 15 years ago owing to internal politics.

Now the norm is to stick together, and to take care that no outsiders join this crowd of already settled typists.

“Somehow we manage to earn a living. That’s all,” Das says.

An advocate in a black gown and white neckpiece starts calling: “Dictation, dictation.” Das continues our conversation as he sets the paper for his new client.

“Shall I tell you who got me into this?” he says. “The man who taught me to type, who brought me here to find work, and who had my back for the past 22 years is sitting there. He did for me what no one does – shared with me his livelihood.” He points to an elderly man a little further down the road.

‘We do what the computer people can’t’

Dilip Brahma has earned enough from his typist’s stall to support his family, build a small home and educate his only son, who is now a graduate and works in a bank.

Brahma has worked from the same street “since 1979”, he says. When the factory where he’d worked closed and he was robbed of his provident fund money, he had nowhere to go.

He doesn’t remember how he ended up here, but “typing was one thing I could manage to do,” he says.

His self-employed venture with his Remington as partner paid well until 1999 or so. “That was when the computers became very popular, and in a few more years, their prices fell to a great extent too. Everyone had computers and they were easy to operate,” says Brahma.

“So why do people still come to a typist?” I ask him.

“Because we get tasks done that those computer people can’t,” he says smiling mischievously.

Somenath Adhikary, a lawyer getting a few pages typed at one of the stalls, intervenes: “Earlier we had shorthand professionals and we could dictate the text and get them typed later. Now good shorthand writers are not available so we have to make do with hurriedly written notes that turn out to be quite illegible at some point,” he explains.

“These typists, having worked with us for so long, know our handwriting; they can figure out the letters and the strokes. They have also learned a lot about the vocabularies we use, the sentences we frame. So when they turn in a typed document on the basis of our scanty and handwritten notes, the typed sheet looks neat and perfect. They make our jobs so much easier.”

Many of the typists must travel for an hour or two each morning, on local buses or trains, to reach their spot on the street. So where, I wondered, did they keep their machines? Did they have to carry them all that way each day?

“Oh no, we rent spaces here to keep the machines for the night,” Brahma says, pointing to a dilapidated house on the other side of the road.

“There’s a room up there where they have racks made for holding the machines. We pay 200 rupees [around $3] per month for a machine to the owner, and the boy who takes the machines up and down from the racks has to be paid 10 rupees [15 cents] per trip, daily.”

On June 23, World Typewriter Day, these typists and their beloved Remingtons, Underwoods, Godrejs and Hermeses will be doing as they do every day – keeping the tradition of typewriting alive and earning a little money along the way. 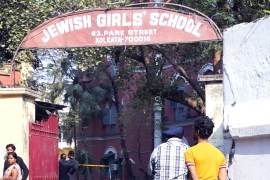 The Last Jews of Kolkata 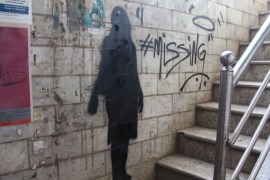 A public art project is asking Indians to notice the millions of girls and women trafficked into sex work.