Dave Pearson had surfed the waves at Crowdy Beach on Australia’s east coast countless times before.

But as he tried out a new surfboard on a summer’s afternoon five years ago, a life-long love affair with the ocean almost cost him his life.

A three-metre-long bull shark smashed into him, knocking him in the head and clamping its jaws over his left arm and surf board, its teeth – like “a whole series of sharp knives” – piercing his flesh.

Pulling him down deep beneath the surface, the shark ripped the flesh away from the bone as Pearson struggled to break free.

“A big flap of skin had come right off,” he recalls. “I was looking at blood spurting and I thought, ‘That doesn’t look right.'”

It lasted no longer than 10 seconds, but the encounter with the shark not only left him severely injured, it also tainted his relationship with the ocean – the place where he had found sanctuary and solace since he took up surfing as a 10-year-old child.

As he met other survivors in the weeks after the attack, Pearson says he realised that sharks often leave scars that cannot be seen.

And so the “Bite Club” was born – a support group for anyone involved in shark attacks.

“The more you talk about it, the better it is,” says Pearson, who still suffers from Post-Traumatic Stress Disorder (PTSD).

“Having someone who has been through the same event as yourself is priceless. I find an instant understanding with other survivors and sharing our experiences and feelings lets us know we are not alone.”

Bite Club, a registered nonprofit organisation, has nearly 300 members in Australia, including survivors, their friends, relatives and rescuers.

“I saw how much it affected my own family and my own mates,” Pearson says. Some of his friends didn’t go surfing for six months after his attack. “It’s a traumatic event, seeing someone get ripped apart.”

Last year saw a steep rise in the number of shark attacks in Australian waters, with 33 cases – two of which resulted in death – according to the Australian Shark Attack File, a report compiled by the Taronga Conservation Society Australia.

So far this year, there have been nine attacks.

Many possible reasons have been given for the rise in numbers, from large schools of fish coming close to the shore to people swimming in more isolated locations.

But some scientists believe that the increase in attacks closely correlates with increase in population and the amount of time people spend in the water.

How to protect beach-goers

Some Australian beaches have nets designed to keep sharks away from swimmers, but experts are divided over their effectiveness.

Animal conservation groups argue that the nets unnecessarily kill other sea creatures like dolphins and turtles.

While the debate over how best to protect beach-goers continues, Pearson, an engineer, says his near-death experience taught him the importance of taking extra precautions, like surfing with friends.

After he broke free from the shark, he tried to paddle to shore, but waves were crashing over him.

“I thought, ‘Wow, I’m going to die today at the beach,'” he says. “I’ve always loved the beach. I thought it’s not too bad. But I thought my kids are still young, I’ve got my partner; I remember saying … ‘Not today, Dave.'”

Despite Pearson warning them that the shark was still swimming beneath him, two fellow surfers paddled over and helped get him to the beach, where they tried to stem the bleeding from his arm.

He lost 40 percent of his blood and sustained cracked ribs. He credits his friends with saving his life.

Doctors managed to save his arm during a six-hour operation, and 10 weeks after the attack, Pearson was back on his board.

Returning to the water was a difficult but necessary part of his recovery, he says.

“I’ve had a lifetime of surfing … When I have issues, I sit out in the surf and I catch some waves … For it to actually turn on me was very hard to deal with.

“I paddled back to the place where I’d been attacked. I sat out there and I talked to the ocean. I said, ‘I’m not going to hold any grudges. Let’s settle this.'”

He now surfs every weekend, but he is much more vigilant: He wears a device on his ankle that is designed to repel sharks, he never surfs alone, and he gets out of the water as soon as he sees bait fish.

“If I’m out there and if I get a feeling that something’s just not right, I’ll say to my mates, ‘I’m getting out.'”

He says this can be critical in their recovery.

“We want to change the way the hospital system handles shark attack survivors. Some intervention by a mental health professional could save someone a lot of pain later in life,” he says.

While the pain in his arm is a constant reminder of the attack, Pearson says maintaining a sense of humour has helped him through. He even bought a t-shirt that read “Shark Bait”.

He says: “I didn’t die and I managed to keep my arm, so ever since then, everything in my life has been a bonus.” 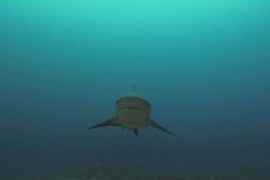 101 East dives headfirst into the debate over whether Australia is doing enough to protect swimmers from shark attacks.