Recent polls have demonstrated that Democratic presidential candidate Bernie Sanders holds a much higher potential to defeat Donald Trump, the presumptive Republican nominee, in an election than Hillary Clinton, although the latter is the Democratic party’s frontrunner.

The Reuters news agency, RealClearPolitics, a US non-partisan polling data aggregator, are among the organisations that have released ratings indicating that Sanders would have the upper hand in the battle for the White House.

However, RealClearPolitics showed on Tuesday that Sanders had a 13 percent advantage over Trump, while Clinton had five more points than Trump.

A Reuters/Ipsos poll released on Wednesday signalled a tight coin-toss race between Clinton and Trump, without reporting on Sanders.

In March, a Reuters poll said that Sanders would beat Trump by at least 14 percent, while reporting on the potential of a very close race between Trump and Clinton.

Dustin Woodard, an analytics expert who played a major part in the discovery of the Reuters poll trend, told Al Jazeera that a significant reason for Sanders’ advantage was due to disproportional support from independent voters – a group that he says other polls failed to factor in.

Sanders and Trump have been the favourites of independent voters, he noted, adding how their voice changes the outcome of polls.

“When I look at other head-to-head polling sources, the 10 most recent polls show Clinton only beats Trump in eight of them and her margin of win averages 4.6 percent, but most, if not all, of the polls do not have their independent numbers correct.”

“This would suggest Clinton v Trump is a really tight battle, possibly in Trumps favour. However, on Bernie Sanders side, he beats Trump in every single poll and by an average margin of 14.1 percent. Again, if independents were adjusted, his margin might be even larger.”

Gary Nordlinger, a political researcher at George Washington University, told Al Jazeera how a recent poll by his university showed that Trump leads Clinton among independents by five percent.

The poll, released earlier this month, also noted that Clinton had a high “unfavorable” rating standing at 46 percent. Nordingler explained that this is largely because many perceive her to be part of the “political elite”.

On the other hand, he said that “Sanders entered the race without much national recognition, hence he had low unfavourable ratings”.

“Sanders has also not yet been subjected to negative TV ads that would drive up his unfavourable rating”.

Nordingler added that Sanders has performed best in “open” state primaries, which independent voters are allowed to take part in. 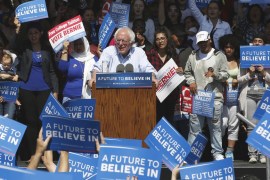 Sanders deals another blow to Democratic frontrunner Hillary Clinton in US state hit by job losses. 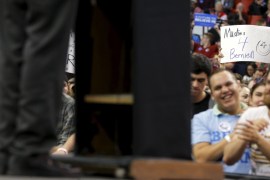