Oslob and Donsol, Philippines – A couple of hundred metres from the shore more than 20 boats carrying holiday-makers are lined up in two rows. Between the rows, excited tourists with snorkels and GoPros on selfie sticks swim among whale sharks feeding on plankton thrown by the boatmen.

During the tourist season, more than 1,500 sightseers descend each day on Oslob, a town of 30,000 on the island of Cebu.

Tourism based on interacting with the world’s largest fish has taken off since beginning there in 2011. The town’s annual industry is now worth more than $1m.

About 500km north of Oslob, on the neighboring island of Luzon where the capital Manila is located, lies Donsol, the coastal town which pioneered whale shark interaction tourism in 1998, bringing economic prosperity to the community.

“Donsol has changed completely since visitors come to experience this,” says fisherman Augusto Nunez, 45, as he stands on his boat and points at a tail moving through the water.

“We used to live only out of fisheries, but now we also have tourism thanks to the interaction with butanding [“whale shark” in the local Tagalog language].”

But the two projects could not be more different.

Donsol’s ecotourism initiative, led by the World Wildlife Fund (WWF), champions sightseeing in the whale sharks’ natural habitat and not feeding them, unlike the Oslob project.

While both towns protect this vulnerable species from hunting through tourism, Oslob’s venture is disrupting the living patterns of whale sharks, which could have far-reaching ecological consequences if tighter rules are not applied soon.

In the 1990s, up to 800 whale sharks were slaughtered and traded from Filipino coastal towns into the Asian market, according to the WWF. Regional demand had given rise to a commercially targeted fishery industry, rapidly spreading from the Philippines to India.

In those days Donsol was a poor fishing hamlet with unpaved roads, and a few open wells provided the only source of drinking water. Meanwhile, hunting was affecting the ecosystem of municipality’s bay, which experts believe is home to the highest concentration of whale sharks in the world.

“Many people came to catch and eat whale sharks to the point that more than 20 of them were killed in 1997,” recalls Joel Ombao Briones, 47, a fisherman from Donsol.

“But only 30 years ago we thought that they were like pests – to kill but not to eat.”

Environmentalists brought the slaughter of Donsol’s whale sharks to the attention of the  media, leading the Filipino government to declare it the first-ever municipal sanctuary for these animals within the 6,000 islands of the archipelago.

Donsol lies within the Coral Triangle, which encompasses six countries and is considered the world’s “most biologically and economically valuable marine ecosystem,” according to a 2014 United States Agency for International Development report. The Philippines is a major supplier of fish in the region, with an industry now worth $1bn.

The government banned the killing and sale of whale sharks in 1998 and introduced a new code (PDF) to protect all fisheries and aquatic life.

Donsol locals were initially reluctant to accept the new regulations as their livelihood depended heavily on fishing, but they agreed to take part in the ecotourism initiative set up by the United Nations Development Programme, which had the potential to be profitable.

Protecting the shark, saving a community

Over a decade, yearly municipal earnings have increased from $370 to $452,000, excluding income generated by related businesses such as hotels, restaurants or sari-sari (small Filipino grocery shops).

Donsol’s entire population has become a stakeholder in this successful venture, in particular those who used to hunt whale sharks. Fishermen provide services as guides and boat crew and no longer rely exclusively on fishing as their sole source of income.

“We can get more money by letting whale sharks live than from killing them. You may get 5,000 pesos ($108) if you catch one, but they are worth millions [of pesos] if they are alive because everybody benefits from interacting with them,” says  Allan Amanse, 49, a fisherman.

Amanse and Briones, who were previously unaware about marine wildlife conservation, are now prominent members of the Butanding Interaction Officers (BIO), a relentless group of fishermen protecting whale sharks through Donsol’s ecotourism industry.

Sightseers pay $6.5 ($2 for locals) for the registration fee plus $76 to rent a boat for up to six people to view whale sharks over three hours.

Supervised by BIOs, visitors are allowed to swim among the sharks, but must stick to Donsol’s strict rules, which include not touching the animals.

“Before, my family could only eat twice a day while now I earn five times more. Thanks to the butanding industry. My eldest daughter is graduating this year, while my son is finishing the second year at university,” Briones says.

The income generated during the butanding interaction season, from December to May when whale sharks migrate to Donsol’s bay, has reduced overfishing, balancing the integrity of the ecosystem.

“Maritime protection areas have expanded from 100 to 312 hectares and bio-ecological assessments show a dramatic increase of fish in terms of frequency and biomass,” says Raul Burce, the Philippines’ programmes director for the WWF, which manages the project with the local council and the Department of Tourism.

The country’s leading role towards legal protection of this animal also achieved global cooperation at CITES, the Convention of International Trade in Endangered Species of Wild Fauna and Flora, in 2002 with the prohibition of whale shark hunting worldwide.

The Philippines has adopted the animal as a national emblem, putting them on the 100 peso note.

The estimated tourism value of one living whale shark over its lifetime is almost $2m and, with the protection of the whale sharks’ ecosystem, Donsol’s ecotourism industry has achieved sustainability.

Lured by Donsol’s success, the town of Oslob launched its own whale shark project in 2011.

Bankas (Filipino small boats) attract the animals close to Oslob’s shores by feeding them with plankton for six hours a day.

With easy access to interaction and affordable prices ($8 for locals; $12.5 for foreigners), Oslob’s industry grew quickly. Between 2011 and 2012, Oslob welcomed 98,000 visitors, nearly four times that of Donsol.

But the high number of tourists and the nature of the interaction in Oslob concerns experts and even locals.

“Feeding these animals is not good because one has to work and find one’s own food, but the whale sharks rely on what humans give them,” says Jefferson Santos, 36, a tour-guide in Oslob.

While he recognises that boatmen now earn in a week what they used to earn in a month only five years ago, he believes people should “try and see whale sharks in the wild”.

A 2015 report on Oslob by the local conservation organisation Large Marine Vertebrates Project Philippines (LAMAVE), found that feeding a long-living migratory species such as whale sharks may have negative consequences for the whole maritime ecosystem.

LAMAVE researchers observed sharks bumping paddle-boats due to the association with food, causing propeller scars in their mouths. The report highlights non-compliance to the established code of conduct and suggests reducing the tourism pressure on the whale sharks in Oslob.

Dr Arnel Yaptinchay, a specialist in aquatic ecology and director of the NGO the Marine Wildlife Watch of the Philippines (MWWP) which actively campaigns against feeding whale sharks, believes this kind of tourism must stop.

“Imagine all the whale sharks sites in the Philippines were [fed]. We may be affecting one of the biggest whale shark populations in the world,” Yaptinchay says.

“Oslob is a poor example and cannot be called ecotourism as it leads to miseducation regarding respecting, using and interacting with any wildlife responsibly.”

Yaptinchay’s NGO highlights feeding as the cause of injuries, poor nutrition and changes in behaviour and migration.

Yaptinchay points out that Oslob’s tourism industry does not only feed whale sharks but all the other fish as well, and warns: “Maybe if done on a bigger scale, this will even cause eutrophication of the site with overgrowth of algae, which is not good for a reef”.

The MMWP director says that even with stronger rules and regulations, it may be too late to change the way interaction works at Oslob.

“If practices are ever to change, it would be much easier to do so in Donsol since the interaction is focused on protecting the animal,” Yaptinchav says. “But it would be impossible to achieve that in Oslob because this is a business-orientated project.”

Meanwhile, Briones and other fishermen in Donsol appeal to tourists’ sound judgment.

“Here, interaction is more special because it occurs in the wild,” Briones says. “If you want to see a tiger, you can either go to the jungle or see them inside a cage in a zoo – just like it happens in Oslob.” 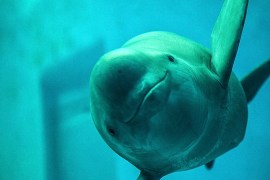 Saving the World’s Only Freshwater Porpoise

We meet Chinese conservationists working to protect the world’s only freshwater porpoise from extinction. 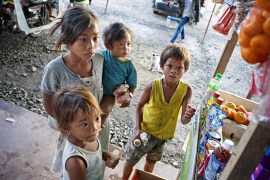 Begging for Life: From Manila to Malmo