Freetown, Sierra Leone – In Sierra Leone dozens of children are left to languish in juvenile detention, living in perpetual fear of being transferred to the country’s only adult penitentiary when they turn 18.

Children accused of a crime have no rights to due process. As a result, they are often considered guilty until proven innocent.

Here are some of their stories

Mabinti*: ‘I will never have another husband as long as I live’

Time incarcerated: Just over one year

Mabinti was only 14 when her family, struggling farmers from Sierra Leone’s northern interior, arranged for her to marry their village’s ageing witch doctor.

The youngest of his three wives, Mabinti says she spent her days doing the worst chores, such as selling homemade soap on the street corner or cleaning the scenes of her husband’s ritual sacrifices.

She says his two other wives, both older than Mabinti’s own parents, were threatened by her addition to the household and sought to damage her reputation with their husband by crafting a story about her having a secret boyfriend.

She says the witch doctor, who was previously kind to her, began physically and sexually abusing her regularly, and threatened to kill her if he ever saw her with anyone else.

Then, she says, one morning as she was carving soap, her husband, who suspected she was planning to see a boy that day, came at her in a drunken rage and began strangling her. Mabinti stabbed him in the neck with a soap knife.

Afraid of what would happen if the other wives found her first, Mabinti turned herself in at the local police station. She was held there for four months – the legal limit for children is 10 days – before being transferred to the Freetown Remand Home, where she has lived for the past 10 months without a single visitor from her family or the court system. Now 16, she has never seen a judge and has never been indicted.

“I will never have another husband as long as I live,” she says. “I found Jesus here and he saved me from my sin, so now I will be able to have my own life. I want to have a business one day.”

Sorie’s father was killed during Sierra Leone’s 11-year civil war in 1999, shortly before Sorie was born.

He lost his mother when he was two and her sister, who raised Sorie in a rural village with other members of his extended family, didn’t tell him how she died.

He says he was never allowed to go to school and was instead forced to spend his days selling goods along a nearby highway.

Sorie ran away when he was 12 and began living on the streets with a group of homeless boys in the nearby town of Masiaka, about 50 miles east of Freetown.

Just before his 14th birthday, he befriended a local girl, meeting her before she went to school and walking her home after.

When her father found out she had been associating with a street boy, he called the police and had Sorie arrested for “conspiracy to commit sexual penetration”.

Without a lawyer to contest his arrest, Sorie was sent to the Freetown Remand Home after a short stint at the local jailhouse. That was more than three years ago and he’s never been contacted by anyone from the courts or had a visitor.

He turns 18 in October, and without anyone to take up his case, will likely be transferred to Sierra Leone’s central prison, where he will continue to wait for his trial to begin.

“I don’t know what I’m going to do if I’m freed,” he says, sitting at the edge of the tattered mattress he shares with two other inmates. “I’ve never gone to school, I can’t read. I try not to think about it. I like to weave and I like to dance, but my friends say artists don’t make money. So maybe I’ll drive a taxi. I hear you can make good money that way.”

T-White: ‘I’ve learned from my mistake’

T-White’s father never knew he existed until he came to live with him in 2012, after the sudden loss of his mother.

T-White says her death was a blessing, as she had forced him to sell goods at the market his whole life instead of sending him to school and beat him if he ever came home with less money than she expected.

His father, on the other hand, was a gentle farmer who, although he barely had enough to pay for basic necessities, began using what little extra money he had to send T-White to school. T-White recalls those days as the best of his life.

After a year together, T-White began sneaking out of the house after his father would go to sleep to hang out with what he calls “the wrong crowd”.

One night, he says, some of his friends came to him with a microphone and speaker that they had stolen from a local church, and asked him to hide it for them. It wasn’t long before one of the boys was caught and told police who was hiding the items.

He says the owner of the microphone, a wealthy member of the clergy and long-time enemy of T-White’s father, hired three lawyers, bribed the judge, and got him sentenced to 10 years for “sacrilege” after he and his father couldn’t produce a $1,700 fine. The boys he says stole the items were never charged.

T-White’s trial was over in less than a week, and he has spent every day since at the Approved School in east Freetown, the country’s only long-term juvenile detention facility. His father gives him emotional support over the phone once a week, but without money T-White knows there’s nothing his father could do to challenge his sentence.

Although he is thankful for the opportunity to continue his schooling while in detention, T-White lives in perpetual fear that no one will come to his aid before he turns 18 and is sent to serve the rest of his sentence at the adult correctional facility.

“I know what I did was wrong, and I’ve learned from that mistake,” he says. “But my future has been destroyed. The education I get here, it’s worthless once I’m sent to the central prison. How can I ever make the world better when I am eventually free? I try not to be angry, but it’s harder every day. I don’t want to come out a monster.”

Justice: ‘There is no justice in this country for children’

Justice was raised by his loving single mother in a small village near the Freetown International Airport.

They had always been poor, but when Justice finished primary school and his mother became unable to pay his fees, they agreed a deal whereby Justice would do petty trading after class to pay for his fees and books while his mother did trading of her own to pay for their basic necessities. It worked well, at least for a while.

When Justice was 15, he began seeing a girl in the class above him, and they eventually started calling themselves boyfriend and girlfriend. They were together for three months before her father caught them having sex. Although they both said it was consensual, the girl’s father called the police and had Justice arrested for “sexual penetration”.

He was in the jail cell for a month. His mother had no idea of his whereabouts, and Justice wasn’t allowed to call her until after he was convicted and sent to the Approved School. He was sentenced to four years.

Justice spends most of his time studying with the hope that if he can pass a basic education exam before his 18th birthday, he can avoid being sent to the central prison. He says his dream is to become a magistrate, so he can make sure no other children have to go through what he has.

“There is no justice in this country for children,” he says. “Children are dying every day or having their lives taken from them. They have no power, so the government just throws them away. But I’m not going to let them throw me away, because I know my destiny now. I am going to stand and fight for justice.”

*Some names have been changed to protect the children’s identities. 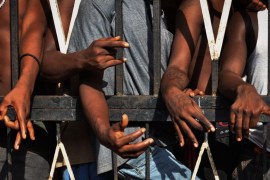 Child inmates are left to languish in prison with no visitors or legal assistance as many wait years for a trial.