Even professional stand-up comics get booed off stage. When officials joke, they are taking a gamble. Gags can win over crowds and ridicule rivals. But they also fall flat and, worse still, irk the very people they need votes from.

The 2016 White House race is lacking in good humour, but, thankfully, there is one US politician who can reliably crack jokes. President Barack Obama only gets average job approval ratings, but he is admired for his deadpan delivery.

“He’s the best comedian president we’ve had,” Dean Obeidallah, a Palestinian-American comic, told Al Jazeera. “He uses comedy like a comedian, not like a president dabbling in comedy, to slice and dice his opponents.”

On Saturday, April 30, Obama will perform at his final dinner of The White House Correspondents’ Association (WHCA) – an annual black-tie gala for some 2,600 celebrities, journalists and officials that has a reputation for political ribbing.

‘Everyone’s going to get skewered’

Carol Lee, WHCA president and a reporter for The Wall Street Journal, runs an event that dates back to 1921 and has been dubbed the “nerd prom” for its geekiness. She expected a swansong Obama to be more caustic than usual.

“Look at the president’s remarks since 2009. Every year it gets a little looser,” Lee told Al Jazeera. “This being his last correspondents’ dinner, I expect he will go places he hasn’t gone in the past. I think everyone’s going to get skewered.”

While running for the Oval Office in 2008, Obama deployed wit masterfully to cut down Clinton and other rivals. Nowadays, he lampoons his detractors, especially those who say he is foreign-born and Muslim.

In November, he roasted the Republican presidential wannabes who had grumbled about the tough moderators in a debate. “If you can’t handle those guys then I don’t think the Chinese and the Russians are going to be too worried about you,” Obama quipped.

He holds his own in skits with such sure-footed comics as Jerry Seinfeld, Steven Colbert and Zach Galifianakis.

Of course, he has a little help. The delivery is Obama’s, but his pre-dinner repartee is hatched by a team of writers, including talent from Saturday Night Live and The Daily Show. A White House spokesman declined to reveal who penned this year’s speech.

At last year’s dinner, Obama appeared with an “anger translator”, played by comic Keegan-Michael Key, behind him. The president remained calm while his alter ego railed at the press for sensationalising the Ebola crisis and the spread of Sharia law.

He also swiped at Midwestern traditionalists who dragged their heels on gay marriage. Obama joshed that he and Vice President Joe Biden had “gotten so close that in some places in Indiana they won’t serve us pizza any more”.

Perhaps Obama’s most notable WHCA dinner piece was in 2011, when billionaire businessman Donald Trump, a guest, was an outspoken leader of the “birther” movement that doubted the president’s nationality.

Trump should focus “on the issues that matter”, Obama said, before listing other half-baked theories. “Like, did we fake the moon landing? What really happened in Roswell? And where are Biggie and Tupac?”

Now that Trump leads the trio of Republican presidential aspirants, insiders predict new one-liners about the coiffed tycoon when Obama takes the podium this weekend, followed by comedian Larry Wilmore.

With no elections left to run, Obama appears more relaxed and daring, demonstrated by his visit to Cuba, a Cold War-era foe. Matt Wuerker, a cartoonist for the news website Politico, said Obama may “slash and burn” on Saturday.

“Think about everything the Republican machine has done to him, from birthers to obstructionism in Congress. Obama’s repressed a full-throated response for seven years and at some point he’ll let them know what he really thinks,” Wuerker told Al Jazeera.

Humour on the campaign trail

The dinner has its critics. Some describe it as a love fest between journalists and the politicians they are meant to be scrutinising.

This year’s event comes amid a sour race for the White House that has often lacked in good humour. As well as slating each other, candidates have tried cracking gags on the campaign trail – but with mixed results.

Hillary Clinton, the frontrunner for the Democratic presidential nomination, was blasted over a “cringe-worthy” joke about the tardiness of black people when she appeared with New York City Mayor Bill de Blasio this month.

In an on-stage skit, de Blasio excused his delayed support for Clinton’s campaign on his adherence to “CP time” – a reference to “coloured people time” and the negative stereotype that blacks are habitually late.

The Republican frontrunner, Donald Trump, has fared a little better.

At a debate last month, Trump wrong-footed his rivals by switching talk from the size of his hands to that of another organ. He told the American people: “I guarantee you there’s no problem. I guarantee.”

The audience howled, and ribaldry is a comedy staple – but voters may ultimately feel it was un-presidential.

He did, however, score points when hosting the comedy show Saturday Night Live, in November. The billionaire smiled coolly while standing between two impersonators as they mocked his trademark style of bragging.

There is a serious side to comedy in American politics.

Satirists have poked fun at their leaders since the Greek dramatist Aristophanes, and probably before. But parody is enjoying a boom in the US with such television hits as The Daily Show and Last Week Tonight.

According to Pew Research Center, some 12 percent of online Americans cited The Daily Show as their news source in 2014 – putting comedy on par with The Wall Street Journal, USA Today and other traditional media outlets.

Viewers of such shows skew toward younger, male liberals, added Gottfried. While left-wing satirical news shows ranked in the top three dozen US media sources, not a single right-wing show made the list.

The Fox News Channel launched a comedy news show for conservatives in 2007, called The 1/2 Hour News Hour, but it flopped amid dismal reviews. Some analysts have wondered why parody is a preserve of the left.

“It’s one of the abiding questions about political satire,” said Wuerker.

Satire is a tool for the downtrodden to cock a snook at the mighty, he suggested. It does not work so well for billionaires or neo-conservatives to laugh at the expense of the powerless and poverty-racked.

“If you’re pro-military intervention, it’s hard to come up with good laugh lines about carpet-bombing the Middle East. It’s much easier to make fun of the affluent, the over-privileged and the bombastic,” Wuerker told Al Jazeera.

Obeidallah, who runs comedy festivals for Arab and Muslim Americans, agrees. Liberals use comedy to poke holes at the status quo. It is “inherently harder to be funny” when sending up gay marriage or civil rights laws, he added.

“It’s much easier to be funny when you’re mocking things than it is trying to defend things.” 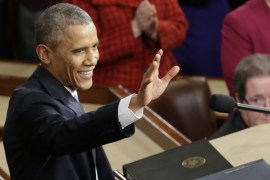 The White House says Obama’s final State of the Union address will break from convention, so what can we expect? 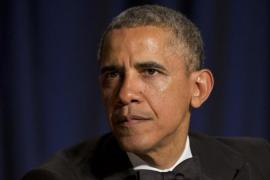 Obama speaks out in support of press freedom

US president makes specific references to journalists who risk their liberty to report in places such as Egypt.