Kabul, Afghanistan – Hamidullah takes a moment to consider his surroundings after asking a young man to fetch him some drinking water.

“Oh, what clean water we had in Kunduz,” the 35-year-old said of his hometown, which lies near the Tajik border. “What clean air.”

“Here, everything is so polluted. We are surrounded by rubbish,” he said. “Look at how we’re living.”

The “here” Hamidullah refers to is one of the newer camps created by the country’s internally displaced people, most of whom have fled other provinces due to fighting and instability.

On the outskirts of this city of roughly 3.7 million people are several such camps – mud huts and tattered tents held together by ropes and plastic bags, connected by narrow pathways with gutters running through them. There are 50 or so  camps for the internally displaced near Kabul, varying in size from just a handful of families to several hundred.

If people could afford to pay human smugglers the $3,000 it takes to make it to Greece – with possibly more than one attempt required – the numbers of Afghans leaving for Europe would be exponentially higher. According to the International Organization for Migration, some 200,000 Afghans applied for refugee status in European countries last year.

And according to the United Nations refugee agency, UHNCR, there are roughly one million internally displaced people, or IDPs, in the country, which has a population of 30 million.

“The majority of the IDPs are very poor and could never afford to flee to Europe,” said Mans Nyberg, UNHCR’s senior external relations officer for Afghanistan. “The majority of them are so poor that they are living in slums outside the cities.”

Hamidullah‘s camp is one of the newer ones, formed when violence returned to Kunduz. It was ultimately captured by the Taliban in September. A group of about 50 families from the area have been eking out an existence at this camp ever since.

Asadullah, 40, a day labourer in Kunduz, looks for odd jobs in Kabul, earning between $1 and $2 a day stitching shoes. For him, paying a smuggler to seek asylum elsewhere is out of the question.

“Save money? What money? There’s no money to save,” he said.

“Our only option is to go across the border into Pakistan only to be caught and brought back to the border,” he said, adding that if he could afford to leave, he would. However, he didn’t want to feel beholden to a foreign country.

“One’s own land is always best,” he said. But many Afghans have taken their chances by heading to the porous border.

Rights groups have highlighted the difficulties faced by Afghan refugees in Pakistan, a country that struggles with its own IDP crisis with more than 4.3 million people displaced due to fighting in tribal areas.

With no option of leaving the country and with little mobility within, many of the displaced feel trapped in their situation.

‘I’d rather die here than go back’

Some indicated that they would prefer to go back home if the security situation would allow it.

The official line, however, is that with few exceptions, things are stabilising.

“We have problems in the mentioned provinces [Helmand, Kunduz, Ghazni and Nangahar], but recently we had some good achievements against ISIS [the Islamic State of Iraq and the Levant] in Nangahar. We have dozens of ongoing military operations in Kunduz, Helmand and other vulnerable areas,” said Najib Danish, deputy spokesman for the Afghan Ministry of Interior Affairs.

“The situation is getting better day by day.”

According to the UN, 2015 was Afghanistan’s deadliest year since the 2001 invasion by US forces, with more than 11,000 civilians killed and wounded. One in four of these casualties was a child, and one out of 10 was a woman.

In the case of the Taliban attack in Kunduz, no one was safe.

“They killed my wife and two children,” said Asadullah.

He had left his family behind in Kunduz – a common move by men in places where there is an increase in Taliban activity. He had hoped the group would leave the woman and two young children, ages four and eight, alone.

But they weren’t spared during one of the Taliban’s raids, he said, and all three were killed.

The UNHCR’s Nyberg said that the security situation is preventing people from returning to their homes. “There are refugees in Pakistan who are going back to their homes in and around Kunduz,” he said. “We have an information programme telling people that some places are not safe to go back to, but if they want to go back, it’s up to them.”

At a larger settlement for displaced people, Charcha camp, also in Ghambar, things are more organised. While a dozen people gather in a tent to talk, a small group dominates the conversation.

“Call me … Toofan,” said one of them, declining to use his real name. A former poppy farmer from the Taliban-dominated southern province of Helmand, Toofan, 45, has lived in this camp on government land for eight years.

“There’s such insecurity – there’s nowhere to work, nowhere to go, no way to live,” he said. “If there’s security, of course we want to go back to Helmand. But right now, I’d rather die here than go back,” he added.

For some, even a short visit is out of the question.

“We can’t even go back to see where our family members are buried,” said Hamidullah.

Not only is paying a smuggler to leave the country out of the question for the displaced, so are many of the basic necessities, they said.

Although the World Food Programme said it distributes electronic food vouchers to some 4,500 displaced families in the Kabul area, in some cases, they are far too poor to feed themselves.

The average daily wage for the few who can find work is no more than $2 a day; a dollar will buy 10 pieces of bread and nothing else.

“In Kunduz, I had a house; now it’s in ruins. Our neighbours were killed. We left with nothing but our lives,” said Mohammad Musa, 60, who arrived in January with his family of six.

“Now some days, I can barely find dried bread to eat. Our children are weak with hunger,” he said.

There are small children everywhere. Four-year-old Afarin sits close to her mother, Farzaneh, who recalls how her three-month-old daughter died in an attack on their house.

“Her name was Arezoo,” said Farzaneh, who has hopes for a better life for Afarin and her two brothers. “I want my children to go to school and have clothes – a future where they can work,” she said.

While NGOs run schools and clinics in the camps, residents complain that the government does little to help, other than offering some wood for stoves during the winter.

“We’re from this land – from this country …. The government should ask us if we need food. In order to live, we need oil, rice, bread,” said Hamidullah, who is at the camp with his wife and five children.

“We spend our daily earnings on food. We used to get regular food supplies but haven’t for two years,” Toofan added.

The men in the tent said that Afghan President Ashraf Ghani, who recently expressed a lack of sympathy for Afghan migrants, visited the camp prior to his election in 2014 and promised help, but Toofan and the others said he hasn’t delivered on this promise.

Ghani’s deputy spokesman, Syed Zafar Hashemi, refused to comment on the subject and suggested contacting the Ministry of Refugees and Repatriation (MoRR) instead.

A ministry spokesman emphatically disputed the claims made by the displaced families.

“They get regular aid from UNHCR,” said Islamuddin Jurat, who also denied that corruption played any part in preventing aid from reaching the displaced.

The UNHCR said it does not distribute food aid to displaced families in Kabul, but does so in other areas. Still, Jurat said, “They get help, but some are not even IDPs.”

“Some are real IDPs … but many are freeloaders who make no effort to find work,” he added.

Mher Khoda Sabar, MoRR’s director of IDPs and emergency, said that the “jobless situation isn’t just a problem with the IDPs; it’s a national problem”.

He added that a small percentage of people in the mix who are not real IDPs, “are people who have lost their jobs and their homes … some are basically nomads”.

Sabar said that his ministry is in the process of designing a plan for the displaced in the Kabul area, proposing to move them into more permanent housing.

But the perception at the Kabul camps, accurate or not, is that they’ve largely been abandoned by the government. So, it’s not surprising that anyone who can leave, does.

“Our kids go out every day looking for work and still come back jobless,” said Musa.

“Why shouldn’t the young leave to find work and a future?”

Weeks after ISIL-linked fighters are pushed back by Afghan forces in country’s east, residents tell their stories. 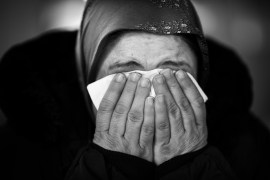 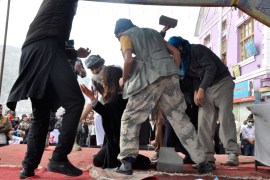 Afghanistan: ‘Farkhunda will not be forgotten’

A year after a mob burned Farkhunda Malikzada to death in Kabul, Afghan women say the fight for justice will go on.