Nepalgunj, Nepal –  It has been nine years since his son was fatally shot by the police, but Lal Khan remains heartbroken by the loss that shattered his family.

Sitting at the back of his two-room, half-built house on the outskirts of Nepalgunj – a bustling city bordering India – the 50-year-old explains that his son, Gulzar Khan, was the family’s main breadwinner.

“I am not well, I have heart problem. He used to tell me, ‘Papa, don’t work. I will work and help the family’,” he says.

The Khan family are Madhesis – an ethnic group living mainly in the southern plains of Nepal, close to the border with India, who have long felt marginalised by the country’s northern hill people. Like hill people, Madhesis are predominantly Hindus with some Muslims and Christians.

There is deep mutual suspicion between the hill and Madhesi people. The hill elite – also called Khas Arya – question the loyalty of the Madhesis to Nepal, on account of their proximity to and close relations with India. While the Madhesis accuse the hill people of economic and political domination.

Madhesis – who form more than one-third of the country’s population – are demanding political and economic representation in proportion to their population.

Emboldened by the Maoist rebellion from 1996 to 2006, Madhesi political groups launched their first mass protests against the country’s interim constitution in 2007.

Khan says 20-year-old Gulzar wasn’t part of that agitation, but when he heard of the violence, he rushed home from work. He was shot by police in ward 11 of the city.

“He was a daily wager … killed while returning home from work,” says Khan.

The family received a one-time compensation payout of roughly $10,000 and gets an annual stipend of $112 towards the schooling of Gulzar’s son, who is now now 10. But, Khan explains, that isn’t enough to cover the cost of his education at a private English medium school.

Nine years have passed since those first mass protests, but the Madhesis believe that little has been done to address the issues that first brought them out on to the streets.

The latest round of protests erupted after the declaration of the country’s new constitution last September.

The Madhesis say it fails to address their main demands, which include better political and economic representation, an end to the discriminatory citizenship law – which by not allowing women to pass citizenship on to their children is of particular concern for the Madhesis, whose close proximity to India often results in cross-border marriages – and the creation of a separate Madhes state as part of the new federal structure.

For the Madhesis, the long-awaited constitution came as a major disappointment after the hope embodied by the Maoist uprising.

The 10-year rebellion emboldened the Madhesis to demand their share of power and jobs, and succeeded in ending Nepal’s 240-year-old monarchy, largely owing to the support it received from historically marginalised groups such as the Madhesis.

But the Madhesis say they didn’t get what they were expecting from it.

“What did Madhes agitation give me? Nothing. Leaders have assured us that they will help us once they come to power,” Khan says. “[But] I have seen so many leaders in the past who have just made promises.”

Since their protests started again in September, around 50 Madhesis have been killed, mainly by police fire. They say the security forces, which are dominated by people from the hilly northern part of the country, use excessive force against the protesters.

Mohna Ansari, a spokesperson for the National Human Rights Commission of Nepal, recently called for an investigation into police excesses against Madhesi protesters.

In a report released on Monday, the International Crisis Group said “there is clear risk of escalating violence in the Tarai”.

As the hill-centric political elite resisted making amendments to the constitution, the protest leaders blocked the border with India. The blockade lasted for almost five months and resulted in a severe shortage of fuel and some essential items, such as medicines and food items.

The landlocked country of 27 million imports almost all of its fuel from India and relies heavily on its southern neighbour for most of its domestic and industrial needs.

Raju Jaiswal is a Madhesi who drives an auto-rickshaw in Nepalgunj, the administrative hub of Banke district. The 27-year-old struggles to support his family of 12 and says: “People from the hills corner most of the jobs. We don’t have a fair share in that. We have to work hard to earn money while they live in comfort.”

But people from the hills say the blockade has brought about an “unbearable scarcity of fuel and cooking gas”.

Shridhara Acharya, who is of hill origin and has been selling cooking gas for the past 18 years, says he “incurred huge losses because of the protests.

“Political parties should not have done this in the name of Madhes. To suffer in the name of the people does not make sense,” he says, standing in front of his shop on the main thoroughfare of Nepalgunj, a city of around 70,000 people.

The border was opened in February, after two amendments were made to the constitution. But that has failed to pacify Madhesi politicians.

Now, the queues at petrol stations have thinned as rows of Nepal Oil Corporation oil tankers speed along Nepalgunj’s main road. But the mutual anger remains.

Many mainstream political parties responded to the blockade with nationalistic rhetoric that fanned anti-India sentiment. After Nepal’s under-23 football team defeated India in February, crowds could be heard shouting anti-Madhes and anti-India slogans in the capital, Kathmandu.

The leader of the Maoist party, Pushpa Kamal Dahal, who is widely known as Prachanda, told Al Jazeera that the new constitution is progressive and has addressed the major issues. Although he acknowledged that the  “delineation of federal provinces” still needed to be resolved.

But the leader of the Madhesi Jana Adhikar Forum, Upendara Yadav, says that “the amendments were a complete failure in addressing the issues of Madhesis, ethnic indigenous and downtrodden people.

“Madhes is treated as a colonised area,” says Yadav, a former foreign minister. “And we are trying to eliminate the colonisation. This is a kind of liberation movement.”

His group is not pushing for “separation or secession”, he explains. “We are talking about the formation of an autonomous state with political and economic rights, with rights over natural resources. That’s actually federalism.”

Yadav is critical of the Maoist party, with which he was briefly associated during his early political career, and accuses it of “behaving like reactionary forces.

“Revolutionary forces have converted into [the] most reactionary forces,” he says of the party that is in the current coalition government.

The Madhes leader says he will soon launch the next phase of peaceful agitation. “We will continue our agitation until our demands are met.”

But veteran Nepali Congress leader Pradeep Giri says the Madhes parties should have welcomed the amendments with “all its imperfections.

“Every great movement must know when to halt. I am not saying they should give up the movement on the whole,” Giri says. “[But] the movement has gone [on for] far too long.”

But Deependra Jha, a Supreme Court lawyer based in Kathmandu and a Madhesi, believes the amendments are incomplete. While he accepts that representation in the lower house of parliament has been resolved, he says geography has been used as the basis for upper house representation and this is problematic.

“The hill-dominated political class has gerrymandered on boundary issues to ensure that Khas Arya [the upper caste hill people] remain a majority in six out of seven federal states.”

Jha, who has been working for the rights of Madhesi people, says that the clause on citizenship needs to be amended as it discriminates against people from the Madhes and “will lead to second-class citizens”.

Moreover, the Supreme Court lawyer believes that the question of economic inclusion has not been addressed at all. In fact, it isn’t even part of public discourse, he says.

Jha says that out of 21 justices appointed to the Supreme Court recently, 15 are upper-caste Brahmins, and that, he argues, clearly goes against the spirit of inclusion.

Meanwhile, Lal Khan says that he wants to forgive the killer of his son.

“My son is gone. Now if the policeman is punished his son will also face hunger. I don’t want others to suffer like me. I don’t want revenge,” he says, unable to hold back his tears. 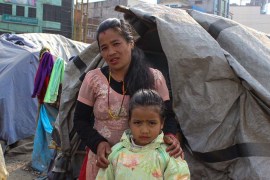 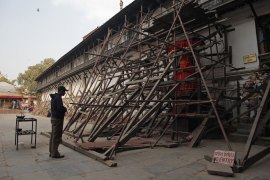 Nepal earthquake, a winter of reconstruction

Government announces start of reconstruction work as thousands of Nepalese freeze out in the cold.