Berlin, Germany – After making the hazardous journey with her family from Afghanistan to Germany, 17-year-old Niloofer fears being sent back.

Her concerns are not divorced from the reality of her circumstances. On Thursday, the European Union (EU) drafted a plan to send 80,000 Afghan refugees back to their wartorn country.

While the Afghan government formally opposes the plan, President Ashraf Ghani called on Afghans to remain in the country rather than seek refuge abroad.

Yet, as the refugee crisis erupted in 2015, more than 150,000 Afghans arrived in Germany, fleeing the ongoing bloodletting in their homeland.

Last year, more than 11,000 civilians were killed or wounded in Afghanistan, marking the highest number of civilian casualties since the US invaded the country in 2001.

Though she and her younger three sisters were born in Tehran, Niloofer’s family was forced to relocate to Kabul, like many Afghan refugees in neighbouring Iran, owing to legal problems they faced from the Iranian government.

“In Afghanistan, there is no security,” the teen told Al Jazeera, sitting a table in the crowded refugee shelter in the Prenzlauer Berg area of Berlin. “When the Taliban finds out that people come from Iran, they try to attack and kill them.”

As she spoke, refugees from Syria, Iraq, Afghanistan and elsewhere moved about in the shelter’s cafeteria, some eating and others playing cards to pass the time.

Ahmad Shuja, an assistant researcher at Human Rights Watch (HRW), said that the move to deport Afghans is worrying.

“All trends of violence across Afghanistan point toward further deterioration in the foreseeable future and not to improvement,” he told Al Jazeera by telephone from Kabul.

Explaining that statistics published by the UN and EU confirm that even the capital is no longer as safe as it was just a few years ago, Shuja said. “That indicates that the vast majority of Afghans – by EU standards – are fleeing serious threats and have no choice but to leave their conflict-ridden country.”

Among the immediate dangers are suicide attacks, bombings and kidnappings, according to HRW. Civilian casualties inflicted by both the Taliban and the Afghan government have both increased.

The real reason we left is that the Taliban wanted to take young girls for marriage.

Having already endured so much, Niloofer fears being killed by the Taliban if her family is deported back to Kabul.

In 2015, the Taliban approached her father and demanded that he hand her and her younger sister over to be married to fighters.

“The real reason we left is that the Taliban wanted to take young girls for marriage,” she recalled, her voice trembling.

“The Taliban told my father that my sister and I were going to be taken for marriage. It was difficult for him, so we left and came to this country.”

Arriving in early March, Niloofer, her parents and sisters are among more than 164,000 refugees and migrants who have made it to European shores by boat so far this year, according to the UNHCR, the United Nations refugee agency.

More than one million refugees and migrants braved the dangerous Mediterranean waters to reach the continent in 2015.

Afghan refugees account for 24 percent of those who have made it to Europe so far this year.

The young girl often looks back on her family’s seven-month trek to Germany.

Crossing from Afghanistan back into Iran, they then passed the mountainous terrain on the Iranian-Turkish border, dodging gun-toting border guards along the way. “The mountains were so tall. It was very dangerous.”

From Turkey, they took an overloaded dinghy carrying 60 refugees – men, women and children – to a Greek island. “I was crying the whole time because I had a bad feeling,” she remembered, explaining that the wintry waves splashed over the boat’s sides and filled it with water.

“My sisters were crying, too. When I think about the journey that we passed, especially late at night, I still cry. I don’t like to remember it.”

‘Then my misery started’

Niloofer is not alone in her fear. Mohamed, 25, worked for a German company as an IT specialist back in his home province of Nangarhar, large swaths of which is controlled by the Taliban.

To make matters worse, local fighters loyal to the Islamic State of Iraq and the Levant (ISIL) have also taken arms, hoping to establish a foothold in the war-stricken province.

Also working as a teacher, Mohamed tried to keep his employment with the German company a secret. “Working as a teacher is not a crime for the Taliban,” he told Al Jazeera. “But if you’re working with foreigners, then that’s a crime.”

But in June 2015, Mohamed came to Berlin for work training and local members of the Taliban found out. “The Taliban went to our home, and then my misery started.”

The Taliban accused him of being a spy for the Germans, demanding that his parents bring him back to stand trial in one of the group’s courts. “My older brother called me and told me I had 15 days to come back. It’s impossible to go back – the trial is death.”

When he didn’t arrive within that period, his family had to relocate to the capital after the Taliban caught and killed his 12-year-old brother as he walked home one day.

“I don’t think there are any safe places in Afghanistan,” Mohamed said, tears welling in his eyes. “How can Germany or other European governments say Afghanistan still has some safe places?”

Now, he shares an impromptu room – a small area cordoned off by cardboard walls – in a refugee shelter in the Prenzlauer Berg neighbourhood as he waits to find out whether he will be granted asylum.

In Germany, right-wing politicians have urged Chancellor Angela Merkel’s government to extradite the deportation of refugees and migrants they argue do not need asylum.

Back in late February, German authorities sent 125 Afghans to Kabul after their asylum applications were rejected. They were voluntarily deported, according to German officials.

Among those calling for more deportations is the Alternative for Germany (AfD), a hardline right-wing party that emerged as the country’s leading anti-refugee voice and made landmark gains in regional parliamentary elections last month.

“Those people who do not have a right for asylum have to go back. Point, period,” said Georg Pazderski, the AfD’s Berlin chairman, arguing that even those who obtain asylum should be sent back after three years or “when the reason for asylum is no longer present”.

READ MORE: An Afghan refugee in Europe – ‘All I can do is pray’

He said accepting refugees “is good for this country. It made Germany better in many ways.”

Reinecke explained that accepting refugees is not without its challenges, however. The people who have fled Syria, Iraq and Afghanistan, he said, “come with the experience of wars, of violence. And some of them are without their families. So, they feel [very] alone here.”

The editor argued that “it will be a long way to integrate them”, even without groups like the AfD and other German political parties pushing for them to be evicted from the country.

Back in the shelter’s cafeteria, Niloofer said she hopes the German government will not send Afghans back.

“Most of the time I think to myself: I can’t live in my country because of the war. In Iran, we have many limitations,” she said.

“Some people tell us that Germany wants to send Afghan people back to our country. I don’t know about my sisters, but I am thinking and crying about this all the time. I’m worried about it. I want a good future.” 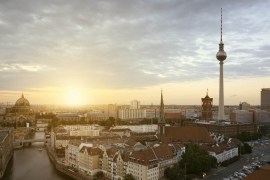 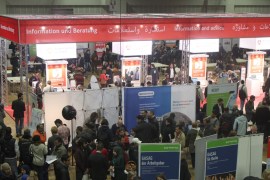 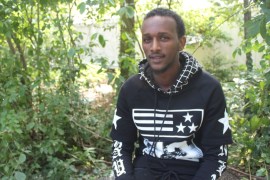