Iraqi-born British architect Zaha Hadid, the first female winner of the top Pritzker Architecture Prize, has died at the age of 65.

Hadid died after suffering a heart attack at a Miami hospital, where she was receiving treatment for bronchitis, her design firm said in a statement on Thursday.

“Zaha Hadid was widely regarded to be the greatest female architect in the world today,” the statement said.

Born in Baghdad in October 31, 1950, Hadid first studied mathematics at the American University in Lebanon before pursuing architecture at the Architectural Association in London in 1972.

In 1979, she established her own practice in London, the Zaha Hadid Architects.

In 2004, Hadid became the first woman to win the Pritzker Prize, known as the Nobel for architecture.

In a statement to Al Jazeera, the Chicago-based Pritzker Architecture Prize organisation said it was “deeply saddened” by Hadid’s sudden death.

“She was truly a pioneer in the field of architecture. She represents the highest aspirations of the Pritzker Architecture Prize. Zaha Hadid will be remembered for her talent, creativity, commitment, loyalty and friendship.”

Hadid, who was known for her neofuturistic design, was recently awarded the 2016 Royal Gold Medal in architecture by the Royal Institute of British Architects.

Hadid designed the London Aquatics Centre, which was used during the 2012 London Olympics. She also designed the Al Wakrah Stadium, which is under construction for the 2022 Qatar World Cup.

“I am in shock and I’m deeply saddened,” Leila Araghian, a young female architect who designed the award-winning Nature Bridge in Tehran, told Al Jazeera.

“She had worked hard for years and never gave up on what she believed in. This is what we all must learn from her.”

Araghian said that Hadid’s legacy will live on “in all the spaces she created and through the work of all the architects who were and will be inspired by her work”. 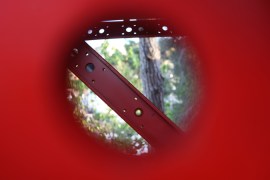 Series creator Daniel Davies on how architecture and design can be used to build a better world.