Comments by Republican presidential candidate Donald Trump proposing a ban on Muslims entering the US and by fellow candidate Ben Carson saying a  Muslim should not be elected US president  have been decried by many as racist and Islamophobic.

But Saba Ahmed, an attorney and the president and founder of the Republican Muslim Coalition, says that while she found them “hurtful”, they would not stop her from urging other American Muslims to vote for the Republican party, and even for Trump.

Ahmed, who lives in the Washington DC, area, says she left the Democratic party in 2011 because she could not reconcile her own views with what she considers to be the party’s “liberal values” and “incompatibility with Islam”.

Despite what appears to be a firmly anti-Muslim sentiment among some US conservatives and elements of the country’s Christian religious right, Ahmed says she believes that Islamic values are most closely aligned with those of the Republican party and that American Muslims would be better off voting for it.

Al Jazeera spoke to her about the current political climate as the election campaign continues.

Al Jazeera:  What is it that you think makes – or should make – the Republican party attractive to American Muslims?

Saba Ahmed: The appeal to American Muslims is that Republicans have values – such as [being] pro-life, [in favour of] traditional marriage, business, trade, etc, that align with Islamic beliefs.

Democrats, [on the other hand], espouse liberal values which are incompatible with Islam. I couldn’t support their pro-choice, pro-LGBT, pro-taxes approach.

[While] some [of the] social values [of the Democratic party] are good, mostly they promote same sex relations, which are completely forbidden in Islam. I have been extremely disappointed in the Obama administration policies [in this regard].

Al Jazeera:  If that is the case, why do you think some conservative Americans, elements of the country’s Christian right and Republicans appear to be the most outspoken in suggesting that Muslims pose a threat to the American way of life?

Ahmed: Many conservatives don’t know any single Muslim. They only hear about Islam after a terrorist attack so they direct all their anger against us.

Our goal at the Republican Muslim Coalition is to have Muslims in key electoral states get involved in their local Republican parties and be a resource for them to understand Islam.

Muslim Americans are better off being Republicans because Islamic values align with the GOP [the Grand Old Party, another name for the Republicans], such as [the] state of the economy, lower taxes and traditional family values.

Al Jazeera:  How do you, as a Muslim Republican, feel about Donald Trump and Ben Carson’s comments about Muslims and Islam?

Ahmed:  I am deeply hurt by their ignorant views of Islam, which is exactly why we started the Republican Muslim Coalition – to educate them about our faith.

I hope to see GOP presidential candidates change their views if they are serious about winning back the White House.

Al Jazeera:  Did you try to reach out to any of the candidates, and, if so, what was their response?

Ahmed:  Yes, I have reached out to Donald Trump, Ted Cruz, Marco Rubio, and several other Republican presidential candidates.

They all are interested in Muslim American voters but have reservations about reaching out to mosques. We hope to have the Republican Muslim Coalition become a resource for them. They are being advised by people who hate Muslims and Islam ….

Having hardly any credible Muslim voices within the GOP makes it hard for them to support Muslim Americans. The Republican Muslim Coalition needs to step up its efforts and strongly lobby all candidates to change their positions on Islam.

Al Jazeera:  What is your opinion on Muslim assimilation and integration into mainstream American culture? Is that possible?

Ahmed The best way to assimilate and integrate into mainstream America is to get politically involved and exercise our civic duties. Our votes can make all the difference and potentially decide the next president in the upcoming 2016 elections.

I would urge all Muslim Americans to get involved in their local Republican parties and attend their events, volunteer at campaigns and, most of all, get out the votes.

Al Jazeera:  There is now a move to ban Islamic law in several – mainly Republican – states, the latest being South Carolina. Why do you think people are opposed to Islamic law being applied to Muslims in matters such as marriages and divorces in the US? And what do you believe the implications will be for American Muslims?

Ahmed: Most Americans don’t know that Sharia [Islamic law] is a way of life and governs many aspects of following Islam. No government can take away our rights to worship according to our deeply held religious beliefs.

The movement to ban Sharia is playing on the fears of Americans by scaring them about Islam. We are lobbying against such bills and hope to defend ourselves in court should there ever be a conflict. 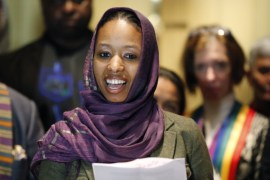 Academic in hot water for wearing a hijab to class to support Muslims and highlighting Islam-Christianity similarities.