In September 2014, I came to Fiji to cover the South Pacific country’s general election.

A couple of days before the vote, I decided to travel outside the big cities of Suva and Nadi to get the views of Fijians for a pre-election report.

It being television, I wanted to do that somewhere pretty, so I chose to go to the island of Ovalau – a guidebook showed some attractive colonial buildings and some stunning beaches.

I’m back on Ovalau now. It doesn’t look anything like as pretty as it did then. In fact, it looks wrecked. The island was in the path of last weekend’s Cyclone Winston.

In 2014, I took a small charter plane to a grass airstrip to reach Ovalau. This time I took a ferry. It was the first to reach Ovalau since the storm, and on board were people who live there, but had happened to be away when the cyclone hit.

As we drew close to the coast, all the passengers gathered along one edge of the ship, on the side closest to their island’s coast. They all wanted to catch a first glimpse of their villages and homes in the era that will, surely, go down here as “post-Winston”.

“It’s like a desert,” said Zack Kedraika, describing the stripped brown hillsides which days ago were green and lush.

A cassava farmer, Kedraika could see from the ship that all his crops had gone.

One lady wiped a tear from her eye as she told me what she saw was “total destruction … worse than I expected”.

It was worse than I expected too.

So far, no one I’ve heard in Fiji’s government, nor from any aid agency, has mentioned Ovalau as being particularly hard-hit. I was eager to draw a contrast with the island I’d seen in 2014, but I wasn’t expecting this.

From the boat, I could see that more houses were in pieces than were whole.

“I haven’t [heard] anything about Ovalau on the news,” he said. He thought that meant it would be OK.

But Ovalau hasn’t been on Fiji’s TV news yet, because until our ship, no one with a camera had been across to see it.

We only had about 45 minutes between the ship docking and dusk. We didn’t have to travel far, though, to see what we needed to film.

Rajendra Krishna was sitting on a sheet of corrugated iron. It had been part of his roof. In the midst of broken sheeting there were planks and pipes.

In Krishna’s hand was a screwdriver with which he was fiddling with a plastic electricity socket, presumably one recently ripped from a wall.

But he didn’t know why. And I realised, quite quickly, I shouldn’t have asked. He wasn’t mending a switch because he needed to. He was doing it because that tiny, insignificant repair was something he could do.

One lady whom I’d met on the ferry lost her niece in Saturday’s storm. Her house had collapsed and relatives found her body when dawn broke on Sunday. They buried her that day.

But deaths, in fact, are the exception on Ovalau: I’ve heard, unconfirmed, of three cases. Reports say at least 21 people died because of the cyclone nationwide.

Tens of thousands of lives, though, have been profoundly hit by Cyclone Winston.

And it’s going to take a very long time for Ovalau to get its prettiness back. 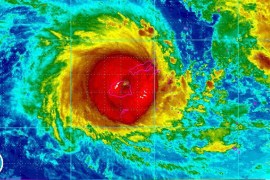 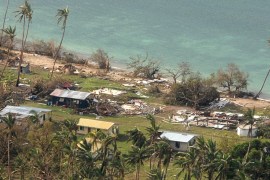 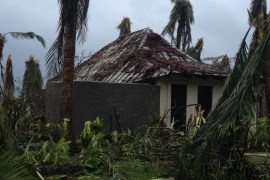