Raja Musa, Malaysia – Three years since the Raja Musa reserve was ravaged in a fire started by a company attempting to clear the forest for palm oil plantation, water has finally returned to the peatland swamp on Malaysia’s west coast and its unique ecosystem is coming back to life.

Forty-two-year-old farmer Ramli Suraji has lived in the area all his life and has played a crucial role in the swamp’s recovery, tending the hardy Euodia Roxburghiana saplings that are planted each month by teams of volunteers at the site. As the Euodia grow, they will provide the shelter that more fragile species need to take root.

“It makes me feel very reassured to see that it’s not an eyesore any more,” Suraji says, sitting on the veranda near his nursery in the village.

As the water levels have risen, plans and wildlife have returned to the area.

“When I was a child, there was more forest. We would go there to fish and sometimes catch birds to keep as pets,” Suraji says.

Raja Musa is part of the North Selangor Peat Forest Swamp, one of the largest protected areas of peat swamp forest in Malaysia. At about 73,000 hectares, the swamp is roughly the size of Singapore.

Across Southeast Asia, there are 25 million hectares of peatlands; the waterlogged soil is one of nature’s most complex, efficient and diverse ecosystems and a vital water source.

While peatlands cover only between 2 and 3 percent of the earth’s surface, they are a crucial piece of the climate change puzzle; a store for about a quarter of the world’s carbon, accumulated over thousands of years.

“If you compare a peatland swamp with a rainforest, where the carbon is stored above ground in the trees and leaves, in a peat swamp there’s five to 40 times more carbon,” explains Stephanie Evers, an assistant professor at the University of Nottingham in Malaysia and an expert in peatland environments.

“We talk so much about carbon capture when we have a natural system that does just that,” Evers adds.

Peat swamps naturally capture and store large amounts of carbon, which, when burned, turn into charcoal, releasing carbon into the air.

But peat’s massive deposit of carbon is a double-edged sword: When peatlands are used for farming, draining the water and burning the thousands of years of old piled timber and undergrowth turns the land into a major source of greenhouse gas emissions.

As the water is drained, the peat decomposes, releasing between 22 and 109 tonnes of CO2 per hectare each year, according to Evers. When the drying peat is burned to a depth of 50cm, it releases 1,101 tonnes of CO2 per hectare – the slow-burning fires can take weeks or months to extinguish. Worse, when peat has burned once, it becomes even more vulnerable to fire, raising the risk of further degradation and further carbon release.

As the Kuala Lumpur-based organisation’s forest programme officer, Rengasamy specialises in the sustainable management of peatlands and leads the Raja Musa initiative. “The removal of the native forests often involves the burning of invaluable timber and remaining forest undergrowth, emitting immense quantities of smoke into the atmosphere and making [the] peatland the highest greenhouse gas emitter in the world.”

Under a choking haze

Almost every year for the past two decades, people living in Indonesia, Malaysia and Singapore have suffered under a choking smoke haze, nearly all of which is caused by peatland fires. The situation has become so common that children now talk not only of a dry season and a wet season, but also of a haze season.

The smog hung over Singapore and Malaysia for weeks, forcing the cancellation of key sporting events and school closures, and even made its way as far north as Thailand. At their peak in September, the fires pumped out more carbon in a day than the entire US economy.

Regional governments first signed an agreement to deal with the haze back in 2002, promising more sustainable management of the region’s peatlands. By 2020, they have vowed to eliminate “widespread smoke haze” and to have rehabilitated fire-prone peat territories by replanting trees in areas such as Raja Musa. Singapore has also passed a law criminalising any individuals or companies causing the debilitating smog.

The rehabilitation of the Raja Musa site – through planting trees, blocking drainage canals dug by plantation companies, and bringing in local involvement – is designed to be a model for similar projects elsewhere in the region.

According to Rengasamy, the restoration of water levels has encouraged natural regeneration, supplemented by the monthly tree-planting exercises from the community nurseries. Villagers also work closely with local forestry officers on fire management programmes.

“This is a very fragile area, prone to burning,” explains Tharmizie Sagiran, an assistant forest officer with the Selangor Forestry Department, who has been working in the area for three years. “We’re not able to take care of the replanting ourselves; we can’t be everywhere. We have limited resources and funds.”

READ MORE: Oceans to have more plastic than fish by 2050: Report

In Kalimantan, the Indonesian part of the Borneo island, Greenpeace last month began construction of a community dam to restore ravaged peatland at the heart of this year’s fires, urging President Joko Widodo to deliver on his promise to require companies to dam drainage canals and do more to protect vulnerable peatlands.

“He must codify zero deforestation in law by strengthening the existing moratorium on forest and peatland development to include secondary forests and forests inside existing concessions,” Greenpeace forest campaigner Rusmadya Maharuddin said in a statement.

“To make any real difference, there will have to be a massive change in mindsets; [an acceptance] that peatlands aren’t really areas that we can use for agriculture at all,” she says. “I don’t think there’s any drainage-based agriculture that can work in a peat swamp forest in a sustainable way.”

In a small corner of Malaysia, the Raja Musa programme has gone some way to reviving a once-desolate area, but the pressure of commercial agriculture is never far away. Forestry maps have highlighted encroachment around the borders of the reserve by suspected plantation companies, and the site is bordered almost entirely by palm oil plantations.

For Suraji, whose family has been growing pineapple, banana, yam and a small number of oil palms in the area for decades, it is about finding a balance of what is good for people, but also good for nature and the planet.

“I wanted to help rehabilitate the forest,” he says, explaining why he joined the project. “I believe a good forest will provide water for our agriculture. We have to work on maintaining it.” 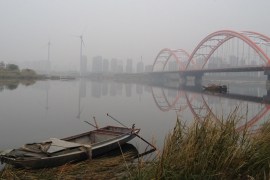 From Canada’s tar sands to Chinese advertising billboards, we explore the psychology behind dealing with climate change.