From begging at the traffic lights of Mumbai to now being trained as a driver for India’s first cab service operated by members of the lesbian, gay, bisexual and transgender (LGBT) community, Sanjeevani Chauhan’s life has come full circle.

“When you see a transgender or a gay person driving a cab in Mumbai, the other transgenders who are begging on the streets will definitely want to be a part of this change,” said Ganesh Somwanshi, project director for Wings Rainbow, India’s first cab service to employ LGBT drivers.

Wings Travel, along with Humsafar Trust, a Mumbai-based NGO that works to promote the rights of India’s gay community, launched the pilot phase of the Wings Rainbow initiative by enrolling Chauhan and four others.

They hope to expand to at least 1,500 taxis by the end of this year.

“There are so many of us who are in the sex trade or begging on the streets,” Chauhan, who has been working as a counsellor for Humsafar for nearly three years, told Al Jazeera.

“Working as a cab driver will not only give us a job and security but also a different kind of respect and acceptance within the society.”

According to government figures, there are 2.5 million gays in India.

Even though India legally recognises transgenders, the LGBT community is heavily marginalised, suffering from intolerance and few opportunities for social integration.

“It took us nearly two months to get everyone on board,” said Somwanshi.

“We did our research and spoke to gays, lesbians and transgenders to find out if they were ready for a project like this.

“They had their apprehensions and weren’t sure if they would get enough customers, if people would take them seriously and what if customers refuse to pay for the ride.”

In 2014, India’s Supreme Court passed a landmark judgment recognising the third gender and granted them equal rights to education, jobs and driving licences.

However, India still functions under the rules of the British colonial era that criminalises homosexuality as a punishable offence.

“After the NALSA judgment, constitutionally LGBTs were given all the rights, but we had to figure out how to implement this on a grassroots level,” Pallav Patankar, director of programmes at Humsafar, told Al Jazeera.

Patankar explained that, as a gay man in India, he completely understood the challenges and obstacles Wings Rainbow will face.

He has been working for almost 20 years advocating for the rights of the LGBT community and empowering them through vocational training, computer literacy classes and convincing corporations to invest in jobs for the LGBT.

“They have a right to work and live like everyone else,” Patankar said, adding that “We need to build their capacity but also sensitise the general public towards accepting them in such roles.”

Chauhan expects to make around $200 per month as a cab driver and is quite confident of getting customers easily when compared to other drivers.

“I am not sure about the men but many women in Mumbai will be more comfortable being driven by us instead of the male drivers because they would feel a lot more safer with us,” Chauhan said.

It will take nearly a year until the taxis hit the Mumbai roads but we can see the realities slowly changing on the ground for the LGBTs in India. 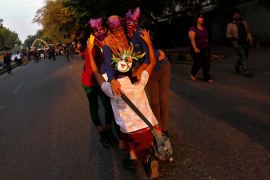 Demonstrators call for end to all forms of discrimination against gays, lesbians and transgenders in India. 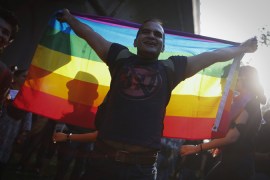 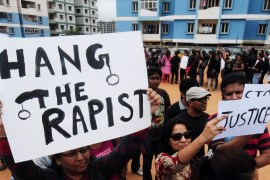 Police to send text messages to 600,000 men previously accused of sexual misconduct – ordering them to behave.