Athens, Greece – As thousands of refugees and migrants continued to be turned away at borders, a steady flow of new faces poured into the Notara solidarity centre in the Exarcheia neighbourhood of Athens.

Notara was founded in late September when around 20 anarchists and leftists occupied an abandoned, three-storey building belonging to the Greek Ministry of Labour. The centre provides temporary accommodation, basic medical treatment, clothing and information for up to 130 refugees and migrants each day.

It is one of several similar projects springing up across the country while the refugee crisis continues to grip Europe.

Tucked away in an alley with graffiti-lined walls, Notara is part of a network of activist-administered refugee solidarity centres in the neighbourhood.

A few hundred metres down the road is a centre that provides social services, while a handful of anarchist-run dining collectives are just around the corner.

According to the United Nations refugee agency, the UNHCR,  more than a million refugees and migrants reached European shores by boat in 2015.

With the doors open to welcome newcomers, enthusiasm was high as dozens of activists and volunteers debated how to expand their operations during an assembly meeting on a chilly night in early December.

“We need more squats in places like Thessaloniki,” one volunteer argued, referring to the coastal city in northern Greece that has become a stopping-off point along the refugee trail as people fleeing violence and economic despair look for safety and stability in Europe.

Mimi, a 34-year-old anarchist and member of the squat, declined to provide her last name, fearing legal retribution. “We decided to do something in Athens about the refugee crisis,” she told Al Jazeera, crushing the butt of her cigarette into an ashtray and swiftly lighting another.

The volunteers at the shelter include teachers, social workers, doctors and full-time activists, among others. What unites them is a belief that the Greek government has failed to shoulder its responsibilities towards refugees.

The difference between philanthropy and solidarity

“We are against the state and we think the government has done nothing to provide a real solution,” she said, adding that more than 1,700 refugees and migrants had stopped over in Notara between September 25 and December 1.

Most of the founding volunteers had been active in solidarity work on Greek islands over the summer of 2015, helping the thousands of people disembarking from boats and dinghies each day.

“We had a full summer of experience under our belts and felt that refugees needed a safe space when they get to Athens, especially as the weather gets worse. From Athens, they still have a long journey ahead of them.”

Deeply ideological, Notara and similar endeavours reject the philanthropic approach in favour of refugee solidarity. Refugees are asked to participate in the twice-weekly assembly meetings, which make decisions through consensus.

“The act of squatting in this building was a message to the government: It is failing everywhere and we are putting a spotlight on it,” she said. “We are anti-authoritarians. We reject the assistance of the state, NGOs, charities and businesses.”

She said that Notara is for “political people” and not those whose sole motivations are humanitarian. “There is a difference between philanthropy and solidarity. We understand that we are on the same level as refugees.

“This is a project by the people. We believe that these are the key principles of self-organisation, and we want to take the struggle into our own hands.”

Exarcheia itself was a symbolic choice. With little government presence, the neighbourhood is a hotbed of leftist political activity where locals clash with police when they show up.

In late November, Notara witnessed a surge of refugees and migrants after Macedonia sealed off its borders to people who could not prove citizenship in Syria, Iraq or Afghanistan, deeming them “economic migrants”.

Macedonian President Gjorge Ivanov claimed that the presence of more than 2,000 refugees in his country at any given time would result in “permanent and direct threats for national security”.

Seraphim Seferiades, a political science professor at Panteion University in Athens, argued that the leftist SYRIZA government’s about-face over Greece’s debt crisis led to a vacuum on the broader left.

“The response of the whole left – not just anarchists – has been quite amazing,” he told Al Jazeera.

“People had accumulated so much energy to participate in politics and in domestic struggles in recent years, like the debt crisis, but all that energy went into the refugee solidarity initiative after the SYRIZA sellout.“

Seferiades said that right-wing groups such as the Golden Dawn have been unable to capitalise on the refugee crisis so far. But if refugee solidarity activists are unable to tie their activism to Greece’s domestic struggles, he warned, the hardline rightists could seize the opportunity.

“It will eventually happen if the solidarity movement cannot continue to politicise the issue. They need to show the general population that what migrants and refugees are going through now is linked to the same European Union policies that make [Greeks] suffer.”

Even volunteers’ duties are divided up according to ideological principles, Mimi explained. “Only doing one job – like clothing distribution – can create a de facto hierarchy.”

When they are not seeing patients, doctors help to distribute blankets and clothes to refugees whose suitcases were soaked or ruined during the perilous boat ride. Teachers do laundry and cook in between classes in Notara’s preschool.

Every few nights, a handful of activists venture to Athens’ Victoria Square – a  gathering point for refugees – to bring those with nowhere to sleep back to the squat.

Said, a 21-year-old Moroccan who did not want to give his last name, left his hometown of Casablanca in early September. Braving the wintry Aegean waters and the lengthy land route, he made it to Idomeni on the Greek-Macedonian border, only to find that the crossing was closed for him.

The closure has created a build-up of tens of thousands of people in Greece, including those fleeing Morocco, Iran, Yemen, Eritrea, Somalia, Tunisia and elsewhere.

Arriving back in Victoria Square, Said was approached by activists from Notara. “They told me there was a safe and warm place to sleep,” he told Al Jazeera. “I’ve been here for a few weeks. I don’t know if the borders will open for us again.”

Achilles Peklaris, an Exarcheia-based journalist and anarchist activist, argued that Notara “is far more organised than the camps run by the government”, accusing the state of providing substandard living conditions for refugees and migrants.

“When you mention the word ‘anarchy’, most people think of chaos and disorder,” he told Al Jazeera. “But if you’re world view depends on a leader to tell you what to do, then we feel sorry for you,” he said.

Referring to the weekly assemblies and inclusive decision-making process, Peklaris added: “No authority doesn’t mean no rules. This is a direct democracy in the purest sense of the term.”

As the assembly meeting came to an end, a family of Afghan refugees arrived. Activists welcomed them in and a translator explained that they could stay for however long they needed.

Mimi and others took their bags to a room with two beds, bringing them blankets and clean clothes. Pointing out the worsening weather and the closing of borders across the Balkans, she predicted that the coming months would be increasingly difficult.

“With the borders closing, so many people are being sent back to Athens,” Mimi said. “What are these people supposed to do? Sleep outside?” 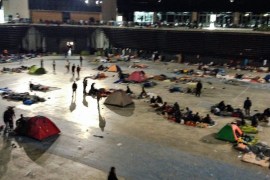 At least 1,000 refugees have been sent back to Athens, because they are not from Syria, Iraq or Afghanistan. 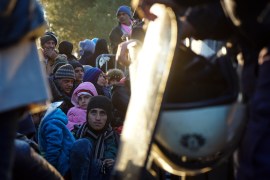 Thousands stuck at Macedonia’s border with Greece as Skopje classifies them as “economic migrants”.