London, United Kingdom – Housing activists mounted a last-ditch fight on Thursday to stop a disabled man from being forcibly evicted from his home and left with “nowhere to go” to make way for private properties to be sold off at prices unaffordable to most residents.

Mostafa Aliverdipour, 50, who has required a wheelchair since injuring his back in a car accident five years ago, and his family are the last residents still living on the Sweets Way Estate in Barnet, north London, where campaigners accuse the local council and developers of waging a campaign of “social cleansing” against the poor and vulnerable.

A court ruled on Wednesday the family could be evicted with immediate effect as bailiffs watched by police and emergency services moved onto the estate to remove dozens of activists and squatters, many of them homeless, who had been occupying some of the empty houses for the past few months.

Sweets Way is the latest confrontation between activists and property developers in a country in the middle of a worsening housing crisis fuelled by a chronic lack of social housing, sharp welfare cuts, and surging rent and house prices.

Last week, eco-activists who had occupied an area of forest on the southern edge of London lost their three-year battle to stay on the site when bailiffs entered the village and destroyed their homes with chainsaws and sledgehammers.

In Liverpool, five activists who set up a shelter for homeless people in an empty bank building were also jailed for three months for trespassing.

“The last house they offered us, my father could not even get through the door but they have been putting him under pressure to sign the contract. If my father is evicted he will have nowhere to go,” he told Al Jazeera.

Speaking outside the High Court in central London, Mostafa Aliverdipour told Al Jazeera he did not know what he would do next.

He said he had suffered months of stress and intimidation and bailiffs had banged on his door early that morning to scare him, despite a notice on the door stating his right to occupy the house pending the court hearing.

His wife and two young daughters have already left the estate and are staying with relatives because of concerns for their safety. But he said he planned to remain in the house with his two adult sons for as long as possible.

“I’ll sit in Sweets Way until they come and take me out,” he said.

Barnet housing officials dispute that Aliverdipour is a fulltime wheelchair user, pointing out in a letter to him seen by Al Jazeera that he owns a walking stick. They say they have offered the family a home that meets their needs.

RELATED: British Muslims and the spirit of Ramadan

But Ash Aliverdipour said his father’s back injury meant he could collapse at any moment if he tried to stand up. In a previous house he had fallen down stairs five or six times, he added.

“If he stood up his back could lock and he would fall down. He requires painkillers every three or four hours. We have so much medical evidence of his situation and still they refuse.”

Earlier in the day, bailiffs used sledgehammers and battering rams to gain access to a barricaded area of the estate known as “Sweetstopia” to evict about 100 people who had been living there.

Some were forcibly ejected from houses, while others who climbed onto roofs were removed using basket cranes. Dozens of police and private security guards were also on hand, along with fire engines and ambulances.

Across the road, others reinforced barricades made of wooden panels and metal fencing and erected other defences around the Aliverdipour home in an effort to delay the family’s eviction for as long as possible.

But by early Thursday, bailiffs carrying riot shields had broken through the barricades and were arresting activists who refused to leave the area.

“We’ll defend it to the last and we’ll make it as tough as possible. That’s all we can do,” Michael, one of the activists, told Al Jazeera, giving only his first name. “We are here for Mostafa, but this is also a bigger political act.”

Most of the residents of Sweets Way, a former military barracks consisting of 142 homes on tree-lined avenues that had been used in recent years as social housing, were evicted earlier in the year after the owner of the land, Annington Property Limited, was granted planning permission to build 288 new homes.

Most will be sold to private buyers in an area in which the average cost of a home is more than $850,000, although Annington said 59 properties will be classified as “affordable”, requiring they are sold or rented out at less than 80 percent of market value.

Many of the estate’s former residents have been relocated to other areas of London or further afield to towns and cities beyond the capital.

“This is a protest against social cleansing,” Stephanie, one of those evicted on Wednesday, told Al Jazeera. “I was born in London and I can’t afford to live in my own city. I’d been trying to get housing for a year and a half before a friend told me I could come and live here. People here have taught me how to find food in bins, find clothes in bins, find everything I need to live without money.”

Ash Aliverdipour said his family had moved into Sweets Way only a year ago and had expected to stay for a few months while Barnet council found more suitable accommodation. But he said they had not known the estate was due to be demolished until their neighbours told them.

“They said, ‘Why are you moving in when everyone else is moving out?’ Most of the other residents left before the bailiffs came. There were a couple of houses where they just chucked their stuff outside and locked them out. Within two weeks the whole estate was gone.”

Shireen Daha, a Palestinian woman who had lived on the estate with her two sons for five years, said bailiffs had come in and smashed up the houses as soon as they were empty in an effort to stop people from moving back in.

“They were just throwing things out. You could see personal pictures on the floor and in the bin, it was really painful to see,” she told Al Jazeera.

“I said to my dad, ‘For the first time it felt like what you told us about 1967’ [when hundreds of thousands of Palestinians fled from territories occupied by Israel during the Six-Day War]. We were leaving our homes and we didn’t want to go, but they were forcing us.”

RELATED: A world built for the rich

Hundreds of protesters marched through East London last Saturday chanting “Social housing, not social cleansing!” before gathering outside empty homes to release balloons into the sky representing 50,000 families who activists estimate have been forced to leave London in the past three years.

“This is a war on the poor. There are over 8,000 people sleeping on the streets of London. People are dying on the streets. I know of four this week and coming up to winter we are going to see more and more,” Jon Glackin of Streets Kitchen, an organisation that provides food for homeless people, told Al Jazeera.

“That is why we need to reopen estates like Sweets Way. We’ve got a crisis and we need to give those people beds.” 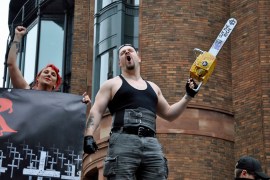 With the Conservative government announcing new cuts next month, protesters hit the streets en masse as a warning. 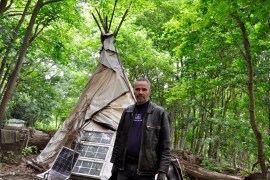