With a funding shortfall of $101m, UNRWA, the UN agency that has been looking after Palestinian refugees in the Middle East for 65 years has said it may be forced to delay the new academic year at the schools it runs in refugee camps across the region.

UNRWA schools are considered one of its most successful projects.

With 700 overcrowded schools in Jordan, Syria, Lebanon, the West Bank and Gaza unable to open their doors to students, half a million Palestinian children will be deprived of their right to education.

And if that’s not enough, 22,000 UNRWA teachers will be out of their jobs.

Across camps, you’ll find that most teachers have children in the UNRWA schools where they work, and this is when a decision like this can ruin an entire family.

If the decision has to be made it would be detrimental. UNRWA says it is talking to international donors in order to secure the funding shortage before school starts on August 16.

Palestinian refugees themselves are making their voices heard.

About 1,000 people – mainly refugees, UNRWA workers and teachers – held a sit-in at UNRWA’s headquarters in Amman on Wednesday.

They demanded the international community to immediately cover the shortfall, and angrily refused to give away their right to education as well as their right of return.

UNRWA’s announcement that it may have to delay the school year came only two weeks ago.

A teacher I spoke to at the protest told me it is not possible that an international organisation like UNRWA wouldn’t know years before where things would be headed without funding.

He said that it’s unfair to entertain the idea of closing down schools less than a month before the beginning of the academic year.

The schools are there because they are badly needed, another protester told me.

He is a father of five and said without UNRWA schools his children wouldn’t even go to school.

They are already running two shifts to accommodate some of the Syrian refugee students. And most Palestinian families living in refugee camps say they’ll never be able to afford private schools.

Many other protesters I spoke to believe donors are no longer interested in the protection of Palestinian refugees and are trying to force UNRWA to reduce the services it offers so that eventually its activities would be terminated altogether.

Most are convinced there is a so-called Zionist scheme that aims to end the refugee cause and not even resolve the Palestinian-Israeli conflict altogether.

Every Palestinian refugee I spoke to said this scheme pressures donor countries to refrain from funding UNRWA.

They say this is extremely worrying because it means the refugees our losing international protection as well as their right of return.

That right and the right to compensation are guaranteed by international law under UN resolution 194.

The issue of UNRWA schools is an issue of dignity for Palestinian refugees: they highly value the services provided by the camp’s schools.

They are also where students learn about their Palestinian identity and heritage.

It is where children begin to build their future in what could otherwise be a hopeless camp where most of its residents live below the poverty line and unemployment is high.

So take this basic right away from them and you are turning their lives upside down.

He gave warning that delaying the academic year may threaten regional stability: children who can’t go to school would eventually end up on the street.

Experts say it is in those hopeless and gloomy camp alleyways were extremist organisations try to recruit the most.

With no education and no prospects or plans for the future, it is easy to understand why a former student would entertain such a desperate idea, one refugee at the protest told me.

In the absence of a solution for the Palestinian refugee issue and the right of return, the UN General Assembly has repeatedly renewed UNRWA’s mandate, most recently until June 30 2017.

Some refugees fear extending UNRWA’s mandate beyond then will be pointless if major cuts in the services it provides are carried out now.

Naeem al-Hamdallah, a refugee in Jordan’s largest Palestinian camp Al Baqaa, said the failure of international donors to honour their commitments has already led to cuts in food rations and a reduction in other services over the years.

But he said “they cannot deprive us from learning. If that’s what they want to do, they need to return our villages in Palestine to us”. 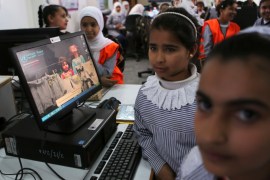 UN warns school may be delayed for Palestinian refugees