Tokyo, Japan – Every year on August 6, the citizens of Hiroshima hold a remembrance ceremony to commemorate the dropping of the world’s first atomic bomb on their city in 1945 by the United States.

A similar gathering is held August 9 in Nagasaki, the site of the second and last instance of nuclear warfare.

This year’s memorialisations promise to be particularly poignant as 2015 marks not only the passing of 70 years since those two terrible incidents occurred, but it also celebrates the 70th anniversary of Japan’s subsequent surrender on August 15 that brought an end to World War II.

The central theme to all three events is peace.

The Hiroshima and Nagasaki annual gatherings centre on Peace Memorial Ceremonies and speeches that exhort all to learn from the devastation these cities suffered and the estimated 200,000 lost lives, so that such mass destruction may never again happen.

Yet notwithstanding the remarkable 70 years of peace and prosperity Japan has enjoyed since 1945, the ceremonies this year will be held against a worrying backdrop of rising tensions both domestic and international – the causes of which are linked and that together pose a threat to the country’s continued pacifist status.

Japan’s Asian neighbour, China, has grown enormously powerful during recent decades, both economically and militarily, and it now boasts the world’s second largest economy after the US, the position Japan long previously held.

Increasingly, China is using its economic strength and military might “to advance its maritime jurisdiction over disputed areas of the East China Sea and South China Sea,” notes the US Department of Defense in its 2015 annual report to Congress on China.

This terrible vicious cycle is what I want to be able to stop. And that's why I say to the leaders of the world, please come here and see what happens when this worst-case scenario comes to pass.

The report lists a number of actions taken by China against Japan in recent years that include restricting exports of rare earth minerals to Japan; claiming sovereignty over the Senkaku Islands (Diaoyu Islands in Chinese) west of Okinawa that are under the administration of Japan; and establishing an air defence zone in the East China Sea that covers airspace above the Senkakus.

On July 23, the Japanese government revealed its frustration over failures to make any diplomatic headway with China when Chief Cabinet Secretary Yoshihide Suga made public to reporters that China has established 16 drilling rigs close to its maritime border line with Japan.

Suga said such “unilateral development” by China “is very regrettable”. The structures have been built, he added, despite a 2008 agreement between the two countries to jointly develop the area’s natural resources.

China is not the only source of discord and uneasiness. Japan is in serious dispute with near neighbour South Korea over ownership of a group of islets in the Sea of Japan that separates the nations.

To Japan’s utter chagrin, the islands are currently occupied by Korean coastguards.

According to Japan’s foreign ministry: “North Korea’s continued nuclear and missile development poses a grave threat not only to the region but also to the entire international community.”

At home and to some degree in response to the above disputes, the government under Prime Minister Shinzo Abe is seeking to ram through the National Diet (parliament) a set of controversial security bills.

These will enable the country’s self-defence forces to fight overseas in defence of its allies under certain conditions – a change in scope termed “excising the right of collective self-defence.”

But the bills face widespread criticism, not only from constitutional scholars and opposition political parties, but also from large sections of the public, some of whom have been holding regular demonstrations outside the Diet building denouncing the bills.

With Abe attending the ceremonies in Hiroshima and Nagasaki, many people expected the mayor of Hiroshima, Kazumi Matsui, to take the opportunity to voice opposition to the security bills in the speech he will deliver at the event.

Yet he has declined to do so.

At a press conference in Tokyo on July 27, Matsui told reporters he wanted “the peace declaration to be universal in nature. That’s why I thought specific issues such as the security legislation currently being discussed should not be touched upon”.

Matsui went on to explain that he believes mistrust is behind the current tensions and military build-ups around the world, which is only creating more distrust.

“This terrible vicious cycle is what I want to be able to stop. And that’s why I say to the leaders of the world, please come here and see what happens when this worst-case scenario comes to pass,” Matsui said.

For those who can attend the ceremony at the Hiroshima Memorial Park on August 6, they will hear the peace bell ring out at 8:15 in the morning – the moment when the bomb was dropped – then a one minute silence will be observed.

The laying of wreaths and speeches will follow, as will testimonials from A-bomb survivors and pleas for world peace made by Hiroshima school children. One thousand doves will be released following the mayor’s speech, and the ceremony will conclude with a chorus and wind ensemble.

In the evening, everyone is welcome to visit the Motoyasu River that runs past the Atomic Bomb Dome, where they can float colourful paper lanterns with personal messages for peace.

The city has prepared special events during the week of and following the 70th anniversary. These include the screening of films about the disaster, and concerts, one staged by a chorus of staff members of the United Nations headquarters in New York wearing costumes of their home countries.

There will also be a portable shrine procession and a series of talks by A-bomb survivors who will give accounts of how they – like the city of Hiroshima – survived that great ordeal 70 years ago. 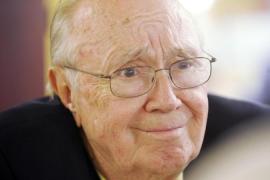 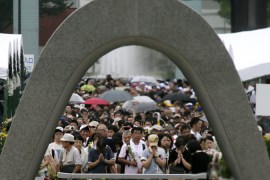