By Benas Gerdziunas and Georgia Littlechild

Calais, France –  On January 15, the Jules Ferry resort near Calais, France, began opening its doors to refugees and migrants.

Today, about 1,300 migrants – mainly from Syria, Sudan, and Eritrea – who fled conflicts and oppressive regimes at home are staying at Jules Ferry, a former children’s holiday camp. Many of them were evicted from squats within the city, and were moved seven kilometres to Jules Ferry.

The opening of the Jules Ferry camp symbolises the seeming permanence of the migrant crisis that has overwhelmed Europe in recent years.

The mayor of Calais, Natacha Bouchart, has publicly requested 50 million euros ($54m) from the United Kingdom in compensation for the 15-year-long Calais crisis.

“For too long, Calais and its population have been handling a situation which they are not responsible for,” she tweeted in July. Calais has barely resurfaced economically since the recession, and its unemployment rate is now among the highest in the country – 12.6 percent since 2013, according to National French Institute of Statistics (INSEE).

Some migrants who arrive in France settle in the country, hoping to be granted asylum or get work permits.

But in 2014, just 16 percent of the 52,053 asylum seekers in France were granted asylum , according to the French Office for the Protection of Refugees and Stateless People (OFPRA).

Requests for provisional work permits for asylum seekers may be considered after a year. If granted, they then have to be renewed every six months, according to the National Fund for Refugees   and  France Asylum Soil.

Meanwhile, other migrants in France are determined to continue their journey to the United Kingdom through the Eurotunnel that connects the two countries, which starts in Calais.

During one such desperate attempt on the night of July 28 , as about 1,500 migrants tried to cross the tunnel, a young Sudanese man was struck by a lorry and killed.

Another Sudanese man, 28-year-old Youssef, told Al Jazeera of his efforts to cross the Eurotunnel over the past seven months. He now sleeps along the motorway closest to the train terminal, which has yet to be fenced off.

“We are the dogs of Calais,” he said.

Youssef, who only wanted to share his first name with Al Jazeera, fled the violence that overran his hometown in Sudan when he was just 15 years old, and has not seen his family since.

Youssef described a life of constant struggle and risk. “Last night five of us got inside a Polish truck, but there wasn’t enough air,” he said.

“We started screaming and banging on the sides to let the driver know we were inside.”

But instead of letting them out, the lorry driver locked the doors and told them they would “die and rot in there”, recalled Youssef. The men called an ambulance and were rescued, Youssef said, but he had fainted by the time help arrived.

Negative perceptions of migrants are common in Calais.

A right-wing Calais organisation, Calais en Colère – the Angry Calais – describes living alongside migrants as “suffocating and disrespectful” on its public Facebook page and on the numerous flyers its members post around the city; the metaphor of “cleaning Calais” is often used.

The group claims that locals in Calais experience violence and harassment from the migrants.

The group refused Al Jazeera’s requests for further comments with a simple reply: “Go to ‘the Jungle’, and see for yourself.” ” The Jungle” is how both the migrants and locals alike refer to Jules Ferry camp.

This self-organised Calais citizens’ group is perceived by many as “too extreme”, said one restaurant owner. “They slow down the process of finding a solution by choosing to be racist.”

Laurent Roussel, president of the Merchants’ Union and a member of the Calais City Council, claimed that “fewer people travel to Calais for commerce, due to fear of migrants”.

“Businesses have lost around half of their turnover; butchers are forced to throw away meat,” claimed Roussel.

Roussel recalled how in October 2014, during a visit to Calais to discuss immigration, Marine Le Pen, leader of the French right-wing party National Front, declined an invitation to meet with him and the migrants.

“I was eager for her, as a member of the European Parliament and a leader, to engage and tackle the problem at its source,” he said.

James Hookham, chief executive of the Freight Transport Association in the UK, said fears of contamination from migrants have caused significant loss of merchandise.

Loads of product are destroyed when migrants hide inside the vehicles bound for the UK, Hookham said during a press interview.

“This way the dogs can’t smell your flesh,” explained Youssef.  French border police depend on police dogs and officers equipped with torchlights to find the stowaways in lorries.

To prevent migrants from attempting the tunnel crossing, up to four police vans patrol the Boulevard de France, which runs parallel to the Eurotunnel train terminal.

“You can’t go there alone. You need to find a group of 35 people minimum. If there’s enough of us, we can distract them and cut the fence with scissors,” Youssef said.

The Eurotunnel terminal offers a better chance of passage for the migrants. Lorries are parked on the Eurotunnel shuttle trains, where the drivers leave their vehicles. This allows for unhindered access inside the lorries.

The migrants disembark once the lorries are far enough inside UK territory. Sometimes they are caught in the act, as when a section of the M25 motorway, which loops around London, was closed when four migrants were detained after leaving a vehicle, tweeted the National Police Air Service.

Recently installed fencing along the N216 motorway, leading to the ferry terminal, attempted to isolate the Jules Ferry camp and make it more difficult for migrants to attempt the crossing.

Instead, migrants at the camp now walk for an hour and a half to reach lorries queuing for the Eurotunnel on the other side of Calais. But inside “the Jungle” – an informal economy is thriving.

Everything from deodorant to canned tuna can be purchased in shops owned by Pakistani migrants.

Four national charities, including Active Life and  Islamic Aid , provide a variety of services, such as legal aid, asylum enquiries and medical assistance, as well as food tokens.

Individual showers and phone-charging points are available until 9pm at the entrance to the camp. Bicycles provided by non-governmental organisations are available for sale for 20 euros ($22) each, and local and foreign volunteers teach vital repair techniques.

Muslims and Christians live side-by-side, and there is a church and a mosque in the process of being built with the help of  Catholic Aid,  a charity organisation.

As the crisis grows, the Jules Ferry camp slowly develops social and economic structures. Local and national charities provide for the many cultural and religious groups who find themselves rubbing shoulders in a confined space.

The removal of squats in the Calais city centre may have led to a boost of business activity there, but locals angrily deny that the measures are sufficient.

“I’m not a racist, but the situation is untenable; the [aid] organisations only help them stay,” said the restaurant owner.

Meanwhile, stricter security around the tunnel has led to migrants taking greater risks.

One Syrian refugee, Shadi Omar Kataf, died trying to swim across the channel to the UK.

In spite of an increased police presence and an additional 7 million British pounds ($11m) pledged by Britain towards efforts to tackle the crisis on French soil, as announced   by British Home Secretary Theresa May, the crisis is growing and the number of fatalities appears to be rising.

At least 10 people have died in the attempt to cross into the UK since June, as compared to 17 in the whole of 2014 , and French police are now using more tear gas to disperse the crowds of hundreds of migrants attempting the crossing every night. 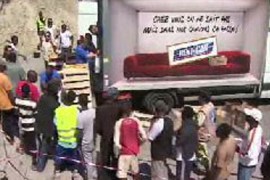 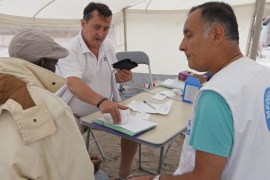 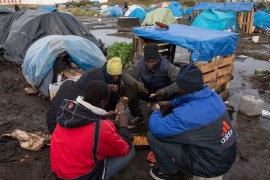 Riot police called after migrants clash in Calais as frustrations mount over lack of lorries crossing the Channel. 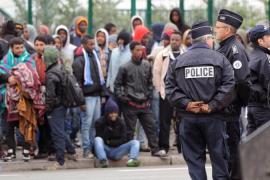