Donetsk, Ukraine – On the front lines of war-ravaged eastern Ukraine, Svetlana Alexandrovna, 64, has spent the last 12 months sheltering in the basement of her home on the outskirts of Donetsk.

Life is tough underground with poor ventilation, and the constant artillery shelling above is nerve-wracking. But with not enough money to start a new life elsewhere, Alexandrovna cannot leave her house, and she said she wouldn’t move even if she could.

“This is my little heaven on Earth,” she told Al Jazeera.

The government has offered alternate accommodation in Donetsk’s city centre for people such as Alexandrovna, and her youngest daughter lives in relative safety there. But her eldest child has remained also to live down below. Both are fearful of their home being looted if they left.

The house of a neighbour was looted a day after that family left – the front door kicked-in, Alexandrovna recalled. She said locals were responsible; they know who is in or out of town.

But there’s a price to pay for those who have remained in the conflict area to protect their property.

When the fighting started last year, Doctors Without Borders (MSF) recognised the need to send psychologists to provide mental health support for the traumatised population.

Psychologist Tatiana Nalesiova has worked in the region for the past 10 months.

Nalesiova explained that people need help to process their emotions, and mental trauma in a warzone is normal given the abnormal circumstances of their daily lives.

When MSF came to visit his basement shelter, Sergei Petrovich asked for psychological help for his wife.

Petrovich has lived underground with his wife and daughter for the past seven months and shares the basement with eight other families.

There are locals who believe they can deal physically as well as emotionally with the constant shelling in this part of the city, Petrovich said.

But, “it’s not about being a tough man or a tough women, it’s about getting professional help”, he said.

Petrovich’s wife has suffered psychological trauma because of the constant shelling. “She’s been unable to sleep the last couple of months… She is suffering from insomnia,” he said.

The situation has also changed children living underground, Petrovich said. “My daughter was once full of life. Now she stays indoors most of the time and goes to the toilet more often than before.”

MSF’s Nalesiova said the organisation has “observed how living conditions and the current situation have affected children living in basements”.

The longer the children stay there, the probability of long term mental issues increases, Nalesiova said, adding often parents do not realise their child’s behavioural patterns are linked explicitly to the conflict environment.

Local volunteer Olga Kosse – who works for the grassroots NGO Responsible Citizens – said many people here yearn for a return to a life that is now part of their past.

“I think the first step for these people is psychological help so they can accept that the war has closed a chapter of their lives, and a new one has started since the conflict began,” Kosse said. 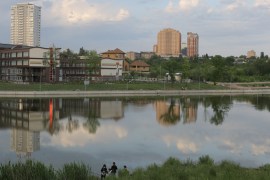 An ageing Cinderella and a changed Donetsk

The rebel-administration, and the people, are cautious in the Ukrainian city as change takes hold and business suffers. 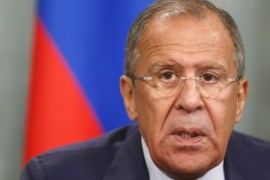 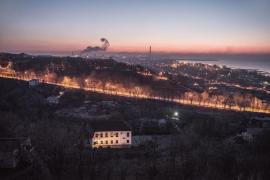 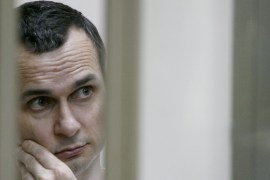 Ukraine filmmaker goes on trial for terrorism in Russia

Oleg Sentsov, accused of plotting terrorist acts in Crimea, pleads not guilty at the beginning of court hearing.