The sea is his life, he says.

In 2006, Kumar, floating with friends on sheets of polystyrene foam in waters near his village of Kovalam, chanced upon an Australian man and his three children.

The curious teenagers watched as the Aussie father taught his kids how to surf the waves of the Bay of Bengal.

“I wanted to be a software engineer,” said Kumar, laughing as he played with the golden beach sand.

“But surfing has given me things that I never dreamt I could have. It has helped me meet people from all over the world, taught me how to speak English, taught me about different cultures, and helped me make friends. Now, all along the coast, people know who Dharani Kumar is,” he said proudly.

“No other job could have ever given me all this.”

Kumar and a number of other villagers owe their new lives to Moorthy Meghavan, a 36-year-old fisherman and surfer from Kovalam, about 40km from the city of Chennai.

In 2012, Meghavan founded the Covelong Point Social Surf School – Kovalam was called “Covelong” during British colonial rule – which trains amateur surfers on how to ride the waves.

Meghavan’s only condition for young surfers to be on his team is that they must not drink, smoke, or use drugs – common pastimes in poor fishing hamlets in southern India.

“It has been my dream to do this ever since I saw some foreign tourists surf the waters in my village when I was out fishing,” he explained.

“I used to spend my leisure hours floating in the seas on a broken door. I asked these tourists if I could try their boards out. I was a natural – obviously, being a fisherman. I took to surfing instantly.”

Meghavan’s childhood is typical of that of many fishermen along India’s southern coast.

His father abandoned his mother when he was a toddler. His mother, pregnant with a second child, returned to her parents’ house in Chennai and left him in the care of his grandmother.

With no source of income and hungry all the time, he left school when he was in 6th grade to take to the sea.

Fishing brought him the money he needed to take care of his grandmother, pay for his sister’s heart surgery in Chennai, and build his own house in the village.

But Meghavan was not happy.

“When I first stood up on the [surf] board, it was like magic,” he said. “It was like a shock running through my body. I was addicted to surfing.”

Meghavan soon realised the sport, although relatively unknown and unrecognised in India, had the potential to help young fishermen such as himself.

He believed it could instil discipline, purpose, and passion in his younger friends and help pull them out of the vicious cycle of poverty, alcoholism and drug addiction in which many fishermen are trapped.

In Kovalam, boys as young as 13 start drinking and smoking mixtures of cannabis and hashish, locally known as “tough”.

Extreme poverty often forces them to drop out of school at a young age to help earn money for their families. Fishermen salaries fluctuate wildly depending on the vagaries of the sea. Monthly incomes can vary from 2,000 rupees ($31) to 20,000 rupees ($310).

Meghavan, determined to improve his life, began teaching himself and about 15 other young men to surf.

His slogan was: “No Smoke, No Drink, Only Surf.”

Recognition for his work came from all quarters – friends from Israel, Germany, Australia, and Canada chipped in, donating their boards to his cause as he did not have the money to buy them himself.

In 2011, an Australian surfer at a surf festival asked participants to help Meghavan’s efforts to teach the sport – leading 35 professional surfers to donate their boards.

Then came another stroke of good luck.

Arun Vasu, chairman and managing director of the Chennai-based TT Group, heard about Meghavan and his work. Vasu, 37, is a water sports enthusiast, and after meeting Meghavan in 2010, he immediately pledged funds to help set up a surf school at Kovalam.

“I decided to invest because Moorthy wanted to do something for others and not for himself,” explained Vasu.

“I initially told him I would fund him for a year, and then he was on his own. But everything has worked out so well, and we are training so many youngsters, changing lives. This is some amazing work being done here, and we have now managed to interest the government, which is seeing potential in surfing as a tourist attraction,” he said.

Vasu pumped in 31 million rupees ($470,000) to buy land and build a modern resort-like area where avid and amateur surfers alike could train in the sport.

Meghavan and his team of young surfers, such as Dharani Kumar, Palani Vijayan, Sekar Pachai, and Kutty Pachai are known as the “Covelong Boys” – renowned on India’s coastline as the best surfers in the country, with numerous awards under their belts.

On the weekends, Meghavan and his team train software professionals and businessmen in surfing, which helps fund their community-building work.

Proceeds are used to help pay school fees for young, aspiring surfers in the village.

Meghavan has helped find jobs for 15 young men and assisted 30 others to become professional surfers.

Despite his efforts, Meghavan conceded to Al Jazeera: “The drinking has not stopped.”

“It is tough to battle alcoholism in my village,” he said. “But at least a lot of the youngsters have seen us, and they come to us out of interest, to train and make a better life for themselves.” 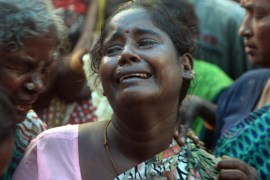 At least 90 people killed and 40 others hospitalised after drinking cheap toxic alcohol. 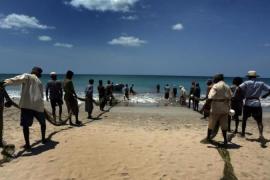 Arrests of fishermen from both countries have become diplomatic headache between two Asian neighbours. 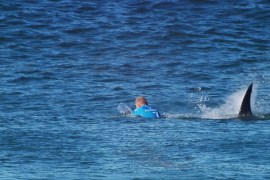 Many of Mick Fanning’s compatriots are unconcerned about venturing into the sea after the surfer’s close encounter.