Guadalajara, Mexico – Antonio Reynoso was last seen alive when masked police officers dragged him out of a children’s birthday party in front of his six-year-old daughter.

His mother, Mayra Hernandez, arrived just in time to witness him being violently hauled into one of seven police cars with obscured license plates that had pulled up outside.

“They say they didn’t take him away, but I saw it. They were beating him. He was handcuffed and bleeding,” Hernandez told Al Jazeera.

That incident took place in Guadalajara, capital of western Jalisco state, on August 30, 2013.

Two years on, Reynoso, an unemployed 23-year-old who harboured dreams of becoming a chef, has become just another statistic in a state where forced disappearances have grown increasingly common.

According to the Mexican government, federal and local registers, 26,029 people were missing across the country as of April 30.

Jalisco officially accounted for 2,160 of these disappearances, but analysts say the actual figure is likely much higher.

Darwin Franco, a local journalist who has spent four years investigating the disappearances in Jalisco, told Al Jazeera the state attorney general’s office keeps a separate register of disappearances, but it does not make the data available to the public.

Having kept track of that register by making monthly freedom-of-information requests, Franco said there were in fact 3,153 people registered missing in Jalisco as of May 31, making it the second-worst state in Mexico for disappearances.

The actual number of missing persons may be even higher still, he noted, as many cases go unreported for fear of reprisal.

Franco said the disappearances are the result of years of corruption and impunity, plus the recent emergence of the Jalisco New Generation cartel as one of Mexico’s most powerful criminal enterprises.

Facing mounting criticism over the disappearances and worsening violence – including the downing of a military helicopter by New Generation gunmen in May – Jalisco’s attorney general, Carlos Najera, resigned in July.

Days after taking office, his replacement Eduardo Almaguer promised “complete openness and attentiveness” towards relatives of the disappeared.

RELATED: ‘You need to disappear’

Almaguer, whose office declined repeated interview requests, vowed to provide family members with 24-hour assistance and access to case files, while raising the number of officers investigating disappearances from eight to 20.

The attorney general will personally head the new task force to investigate disappearances, and new protocols for immediate search-and-rescue operations will be put in place.

The changes were welcomed by Guadalupe Aguilar, a prominent member of Families United by Disappearances in Jalisco (FUNDEJ), a local coalition to find missing persons.

“This will help us a great deal,” Aguilar told Al Jazeera, “as long as the authorities keep their word.”

Aguilar has searched tirelessly ever since her son, 34-year-old lighting technician Jose Luis Arana, disappeared just outside Guadalajara in January 2011.

They drove him away in a truck and we haven't heard anything of him since.

After years of shabby treatment, Aguilar said the authorities have grown more helpful and responsive in recent weeks, working increasingly closely with families and helping them to build a DNA database of the relatives of each victim.

Nonetheless, there is much more work to be done. Speaking on behalf of the 327 families that comprise FUNDEJ, Aguilar lamented, “They still haven’t found a single one of our missing relatives.”

The new measures announced by the attorney general in late July also include collaborating with the Jalisco-based FIND Foundation, a non-profit organisation dedicated to locating missing persons.

FIND director Juan Manuel Estrada told Al Jazeera that “many of the FUNDEJ cases are forced disappearances linked to organised crime. These are the most difficult cases to solve.”

Forced disappearances differ from conventional kidnappings in that the abductors do not demand ransoms, Estrada explained. Instead, victims are often sold into sexual slavery or forced labour. Others are simply killed because of disputes with criminal gangs.

Despite the increasing concern from the authorities for their plight, a sense of frustration and abandonment abounds among relatives of the disappeared.

Wearing white T-shirts emblazoned with their missing relatives’ names and faces, about 100 members of FUNDEJ gathered outside of Guadalajara’s iconic cathedral at a recent demonstration.

Two young girls held up a sign lamenting the disappearance of their father, while desperate cries of “They took them alive; we want them back alive!” rang out as grief-stricken mothers begged the public for solidarity.

Many relatives have resorted to leading their own investigations, such as the family of Jesus Garcia Sanchez, a 53-year-old farmer abducted on May 25 near Tomatlan, a remote town in southwest Jalisco.

“He went to Tomatlan with my mom to buy a few things, and they were driving back to his ranch when a group of armed men stopped them and pulled them out of their car,” his 24-year-old daughter, Diana Garcia, told Al Jazeera.

“They let my mom go, but they said they wanted to talk to him. They drove him away in a truck and we haven’t heard anything of him since,” Garcia said.

Exasperated by police inaction, Garcia and her sisters travelled to the military barracks in Tomatlan to request help.

“The chief officer told us all we could do is wait for more news,” she said, her bottom lip trembling. “I don’t think the authorities are taking it seriously at all.”

Vazquez realised something was wrong when her daughter stopped answering her phone one afternoon, but the authorities wouldn’t let her file a missing person report until 72 hours had passed.

“This is a terrible policy because the criminals can take advantage of that window of time,” Vazquez told Al Jazeera.

“This indicates that these were professional criminals, not amateurs,” Vazquez said. “That’s all we know to date. There have been no advances in the investigation.”

While many relatives remain determined to find their loved ones alive, others simply want to know the truth about what happened to them in the hope it might bring justice, or a sense of closure.

Although she fears the worst, Hernandez has not stopped searching for her son since seeing state police officers beat him and drag him away.

“One of the detainees told me [the police] beat him until they were exhausted,” she said, her voice breaking down into a whimper and her eyes filling with tears. “They beat him unconscious and, according to a detainee, they killed him.”

Authorities did not respond to Al Jazeera’s queries about the case, but Hernandez said the police have no record of her son’s arrest and claim he’s a fugitive. She’s convinced he would have contacted her if this were the case.

Recovering her composure, Hernandez said: “The authorities haven’t done their job. The police are the ones they should be investigating.” 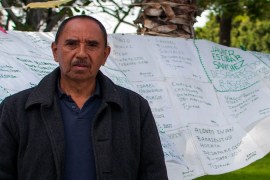 Mexicans fight back over their missing

Baja California – with its own grim history of disappeared people – finds a voice in the fight against violence. 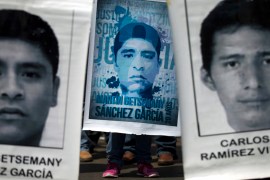 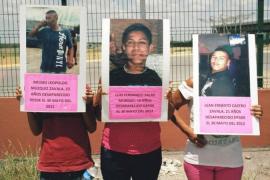 Fault Lines travels to Mexico to investigate one of the worst humanitarian crises of disappearances in Latin America.