Boarding a scheduled flight from Lesbos to Athens, an American holidaymaker holds her nose and mutters: “I can’t stand this.”

A Syrian family take their seats opposite. There are children and loads of hand luggage. The air is pungent with sweat.

The packed cabin is an extraordinary incongruity of tourists and refugees. Their worlds could hardly be further apart.

When the war is over I will go home.

The Syrians have been given registration papers that allow them to move within Greece for a limited period.

The Greek government hopes they will take the opportunity to leave and the vast majority do.

The Syrians tend to have at least some money – many other nationalities arrive in Greece with nothing – so they can afford the occasional flight, bus fare and sea crossing.

Beside me sits Mohammed (he prefers I don’t use his family name), 22, a graphic design student from Damascus.

He served fruit cocktails in Istanbul for a year but, with no sign of an imminent end to his country’s civil war, he is moving on by a variety of means to Germany. He and many thousands of others.

“In Syria, there is only killing. I need a new life. I will get that in Germany. I will learn the language and learn about the society and after two years they will give me a passport,” he says.

Germany will receive 800,000 asylum seekers this year, more than any other European country, most of them refugees like Mohammed.

I ask if he will ever return to Syria. He looks affronted. “Of course. When the war is over I will go home.”

‘They think we are bad’

A majority now enter Europe via Greece – 50,000 in July alone – and most of these people cross the Aegean from Turkey to one of the Dodecanese or Aegean islands; Lesbos, Kos, Chios.

I ask Mohammed whether he has felt welcomed by the Greeks.

“Some. The Greeks are good people but they think we are bad. That’s because others like Pakistanis, Afghans, Iraqis say they are Syrian so they will get papers quicker.

“So the Greeks think Syrians are bad. But we are good people. If you come to Syria with nothing, you will be given everything: food, money, a place to sleep.

“Here, they give us nothing.”

Mohammed explains how he and others have been beaten back by police at a Lesbos registration centre, how hotels routinely say that they are full when they clearly are not.

An elderly Greek man in the aisle seat audibly harrumphs and rolls his eyes.

What has been the worst part of his journey so far?

“Crossing the sea from Turkey. We came in a big plastic boat. Fifty people. We paid $1,200 each. I had to steer the boat. I have never done this before and I was afraid. It was dark and the children were screaming.”

For Mohammed, there are still hardships to come. I ask where he will go from Athens. North to Macedonia, he says, by foot, by bus maybe, then Serbia, Hungary and afterwards to Germany.

Does he realise that Macedonia has just declared a state of emergency and is shutting down illegal routes across its border using armed soldiers and tear gas?

Has he heard that Hungary is building a fence across its border with Serbia?

“Yes,” he says, pointing at his iPhone. 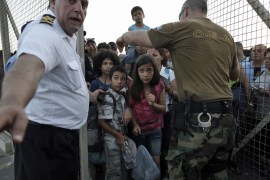 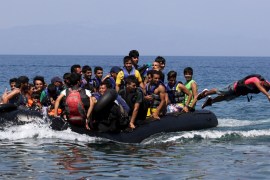