Perth, Australia – Up to a third of Perth’s drinking water starts life in the Indian Ocean where it is drawn into an intake pump about 400 metres inland. It is pumped another kilometre into the sprawling, open-plan complex at the Southern Seawater Desalination Plant in Binningup, Western Australia (WA).

About 45 percent of the seawater entering the system gets turned into fresh drinking water that can then be piped out north towards Perth, or even as far as Kalgoorlie in the east. The rest is returned to the sea as brine.

Half a decade ago this process of turning raw seawater into drinkable tap water, or desalination, would have been controversial, but without it, Perth would probably be on water restrictions.

At the time, the soft-spoken Alberto de Miguel was working as the project manager overseeing construction on both stages of the $1.4bn project. He was also the man to help Barnett push the button which formally marked the start of the plant’s operation.

Now alliance manager of the plant, de Miguel and support services manager Rob Ball are eager to talk up the facility they spent six years helping to build on the site of a disused limestone quarry about an hour and a half south of Perth.

The plant, they said, is one of the largest in the world. It uses cutting edge micro-filtration technology and won an award in 2012 for the world’s best desalination plant.

Any carbon emissions from operations are offset by a nearby 10mw solar farm and 55mw wind farm.

At the first stage of construction, the plant had the capacity to produce 50 billion litres of drinking water a year.

But, with the added capacity from stage two, this number doubled to 100 billion.

With another 50 billion from a plant located further north at Kwinana, desalination now provides up to 45 percent of Perth’s total drinking water.

The pair told Al Jazeera that they don’t think about whether most people really understand what goes into making a glass of water.

“If people haven’t been here, and don’t know, they’re quite amazed,” Ball said. “They’re amazed at the enormity of it.”

Western Australia has always been nervous about its water.

In 2011, a Fox News segment exploring whether the city of Perth could become the world’s first “ghost city” for lack of water made local news.

According to water historian Ruth Morgan, water was contentious even in colonial times, as access to water often fuelled early conflicts between settlers and local indigenous people.

“The establishment of permanent settlements often came at the expense of Aboriginal access to traditional water supplies,” said Morgan.

Historically, dams in the southwest, once provided Perth’s major source of drinking water.

From 1911 to 1974, a network of dams collected 338 gigalitres a year from rainfall. But for the 25 years after, that amount halved to 177 gigalitres as rainfall fell 15 percent.

And those figures have not stopped falling. Between 2006 and 2010 alone, the average amount of water flowing into the states’ dams each year was only 57.7 gigalitres.

“It dropped to only a quarter of what it was for most of the 20th century,” Professor Will Steffen said. “And this of course is a time when Perth was growing.”

Steffen, a climate scientist with the Australian National University, said there is clear evidence the drying of Western Australia’s climate is linked to climate change and accepting this has helped Perth begin to adapt.

“In a way, Perth is in a reasonably good position in that the understanding is so good there,” he said.

A recent study using NASA satellites to assess the availability of groundwater in 37 of the world’s major aquifers found many of those in inhabited regions were at risk of being bled dry.

It named California, India, the Middle East and North Africa as the most at risk, while Western Australia’s Canning Basin in the state’s north was said to have the third highest rate of depletion.

“This is different than most of the other basins with depletions that are largely driven by agriculture,” Richey said.

But these findings have been disputed by the Western Australian Water Department on the basis they are “not consistent with the longer term on-ground data and observations of the department”.

“The methodology employed by NASA is interesting, but has limitations due to it being based purely on satellite remote sensing, which can generate inaccurate findings without on-ground water level or abstraction information to support it,” Greg Claydon said.

As the departments’ executive director for science and planning, Claydon took issue with the lack of data considering local weather patterns, which are “highly variable”, and the short time-frame of the study.

Claydon told Al Jazeera the Canning Basin is a relatively untapped resource compared to systems such as the Gnangara that lies directly below Perth and provides the city with the bulk of its groundwater.

While this system is stressed from use, Claydon said its condition is well understood and management prastises are changing as its knowledge base grows.

Claydon insisted that the local geography means there is little risk of problems associated with overuse of groundwater.

“The geological formations are well compacted and the changes to water levels are not extreme,” he said.

This means it should not be compared to places like California in the US, which is suffering one of the worst droughts in its history and is currently drawing on groundwater for 60 percent of its water supply.

Grady Brand has worked at Kings Park for 37 years. He is the senior curator which makes him one of three people responsible for watering the largest garden in the state.

Kings Park and its Botanic Gardens is home to a diverse range of plant life, spread out over 400 hectares, two thirds of which is pristine bushland.

“This is a living, outdoor museum,” Brand said. “Though this is a little bit different than a museum in that we are exposed to acts of God.”

Which is why the King Park administration has spent the last decade planning for a future where a drying climate and water scarcity may change its face.

Part of this process has been strict water management.

“All King Parks’ water is groundwater,” Brand said as he explained how each year the park is given a water allocation that is overseen by a steering committee. Any use of turf has to be justified according to a priority system.

The actual process of watering the plants is an entirely automated regime controlled by a computerised system measuring everything from evaporation rates to humidity.

For him, it’s only careful planning that can ensure his park endures.

“Plants are living creatures,” Brand said. “You can’t just turn the water off.” 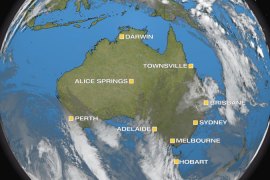 Winds gusting over 100kph have left over 10,000 people without power. 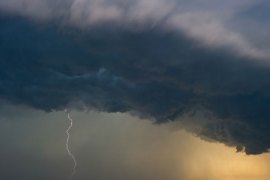 Severe weather swept across southwestern Australia, bringing much needed rain in the process. 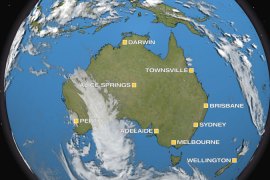 Thousands without power in Western Australia