Athens, Greece – Over the weekend, the debt-ridden Mediterranean country overwhelmingly voted against a bailout offer from its creditors that insisted on more austerity measures.

The result brought throngs of Greeks pouring out onto the streets of Athens to celebrate, despite the risks the outcome could hold for the country’s banks and wider economy.

Sixty-one percent of population decided to reject a combined deal from the European Commission, European Central Bank (ECB) and International Monetary Fund that would have seen yet more cuts to the pension system and hikes on value added taxes.

The result appeared to vindicate Greek Prime Minister Alexis Tsipras’ decision to hold the referendum – seen as a vote of confidence in his government. Some also viewed the vote as a poll on Greece’s eurozone membership.

The Greek banks are now teetering on the edge of a liquidity crisis, and the government must pay a 3.5bn euro ($3.8bn) repayment to the ECB by July 20.

The ECB said on Monday that its governing council had decided to maintain the provision of emergency liquidity assistance (ELA) to Greek banks at the level decided on June 26, but to adjust the level of cuts on the collateral accepted by the Bank of Greece in exchange for the assistance.

That decision has effectively lowered the amount of ELA that will be available to Greece in the future.

Following Sunday’s poll, Greek people told Al Jazeera why they decided to vote “yes,” or “no,” or nothing at all.

“The people of Greece voted ‘no,’ but after the vote Prime Minister Alexis Tsipras said that he is going to make a compromise with Europe in two days. How can he do that when the people voted ‘no’? He [Tsipras] also asked us if we agreed with the documents for the bailout. But these documents should have been read by all people.

[Since the election of the new government] five months have passed and we have not seen anything he [Tsipras] said he would do, like cutting down on tax evasion. He did not do anything to catch the wealth in the system. He is not the socialist he appears to be, because he compromises too much. I predict that his government is going to collapse pretty soon.”

Mina Philipapoulou works for her father’s law firm in Athens. She has seen business fall dramatically in the past five years and voted “no” so that Greece can retain sovereignty and ownership over its economic policies.

“I voted ‘no’ because I think Europe is changing. The democratic role of it has just faded away, so I thought it was very important for our people to say ‘no’ to this thing. It was more symbolic for me. We have had enough with the austerity measures.

I’m a lawyer, I have my own office and our business is down about 80 percent in the past five or six years.

Politicians are politicians. But I really like the fact that someone new is in power.”

Nick Salvanos said he abstained from voting on Sunday. With little hope for young people in Greece, he said he will probably end up leaving the country soon.

“I voted neither ‘yes’ or ‘no’ because my feeling is that it was meaningless. Both of the decisions are bad for Greece. I did not read the commands being handed down from Brussels, but from what I hear I think they are very strict.

Unemployment among the young is very high. This is a major problem, if not the biggest one. Lots of my friends are leaving Greece. I am not sure I believe in the Tsipras government, but staying in Greece is not my first option actually.

My friends and I have all been outside of Greece. We are very good people but I would not say we are workaholics.”

Marcus Alexandridis can speak Norwegian, Danish, Russian, Lithuanian as well as some Italian and French. He said Greece needs fiscal reforms, but the country was right to have said “no” to Europe.

“Most people just want to make themselves comfortable at work, in the public sector especially. They try to take every day easy and not do much. So, as long as these dinosaurs are filling positions that really matter, young people will not have any other option to work.

I voted ‘no’ because I did not believe it was ‘yes’ or ‘no’ to the euro. We all want to stay in the eurozone. It’s quite important for Greece and its development. Other than that, we have been asking for help for so many years and you can’t simply bite the hand that is feeding you. But you cannot say ‘yes’ to everything like previous governments did.

I am having some doubts about the government now. I knew they wouldn’t do everything straight away, but now I am expecting some concrete results. There have been small steps but they have been unimportant and quite irrelevant since they got elected. My job and my family are the only reasons I have stayed in this country.”

Christina Lefteris said she is financially comfortable and has kept her job throughout the crisis. But she is worried for her young son and voted ‘no’ in order to guarantee him a more prosperous future.

“I voted ‘no’ because at last we have a prime minister who is much better than all the others. I believe he can do whatever he likes and whatever he needs to do for Greece.

We need to create more jobs and the only way to do this is having a better socioeconomic model.”

Johanna Verlija said Greece has wasted six months during which it could have been taking decisions aiming at getting the economy back on track. She voted “yes” because she fears a “no” vote will alienate Greece in Europe.

“I am far more conservative than my friends. I voted ‘yes’ because they [the government] didn’t persuade me about their sincerity during all these negotiations. I think the past five months were full of mistakes on both sides: Europe and the government.

But I was also afraid as many people thought that a ‘no’ vote would bring far more problems than it would solve. I am more optimistic today than I was yesterday because of the political meetings that have taken place. I think Tsipras is trying to combine many voices and sacrifice the minister of finance [Yanis Varoufakis] so as to negotiate with Europe with better terms.

Yet, I believe that all the private television channels were scaring people into voting ‘yes’. It was pure propaganda. My reason to vote ‘yes’ was a personal choice because of my environment. I work in the Bank of Greece and we are all more conservative.”

Leonidas Lyberoupolos lost his job as head of a sales team during the economic crisis. He said his country has been humiliated at the hands of its creditors and accuses Germany of wanting to take revenge on Greece for daring to ask the country to pay reparations from the Second World War.

“I voted ‘no’ in order to hold on to my pride and dignity. For five years we had many difficulties. France and Germany make us feel like we are servants.

Greek people are very proud people, but yesterday 40 percent said ‘yes’ because the banks are almost closed and people who have some money were afraid of losing it. I have a little money but I said to myself that I have children and I want hope for the next 20 years from now.

I don’t believe that tomorrow everything will be okay.”

Nicos Liosios lost his job at a Hyundai factory during the crisis and said the financial assistance programme offered to Greece by the European institutions would push more Greeks into a situation of economic hardship due to pension cuts and less public spending.

“The plan they presented to us was supposed to be for a short term one, but the one that we voted on Sunday was again an indefinite term programme. There was no end. Our debt is not the Greeks’ but something forced upon us by politicians and we must pay it back forever with no hope.

I lost my job at Hyundai five years ago, where I had worked for 20 years. When the [economic] crisis emerged, they told me to go for no real reason, but the company was afraid about what might happen in Greece. Now things are very difficult. I try to earn money and get by with help from friends.”

Yannis Stefanidos said he voted “no” on Sunday because he feels Greece’s sovereignty has all but vanished inside the EU. He wants it back and is a huge fan of Nigel Farage, the leader of the UK Independence Party (UKIP)

“I said ‘no’ because the EU’s programme for Greece did not work. Now things are very difficult in Greece because of the regime of austerity. I am actually a great supporter of Nigel Farage [the leader of UKIP]. He is someone who is willing to protect the interests of his country.

We have become a country that resembles something like Bangladesh. The funny thing is everyone believes the rest of Europe is free from this, but just watch, next up is Italy, Spain and Ireland.” 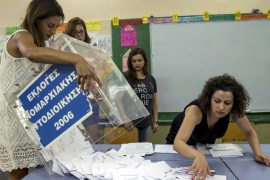 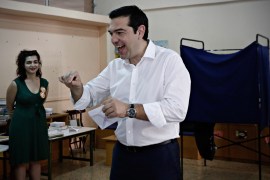