Police brutality in the US was the topic of discussion among the restaurant’s patrons on this unseasonably hot June day. Two members of the Huey P Newton Gun Club (HPNGC) sat down with Al Jazeera at Elaine’s Kitchen to discuss police brutality in Dallas.

“Arming ourselves is the only choice we have. They’ve backed us as far into the corner as we can go,” said Babu Omowale, 48, a senior member of HPNGC and the New Black Panther Party, a black separatist organisation that has been denounced as a hate group by the founders of the original Black Panther Party. The HPNGC is not linked to either group.

Founded in July 2014, HPNGC – which  takes its name from Huey Newton, the cofounder of the Black Panther Party – is a black open-carry group that organises armed marches and patrols throughout black neighbourhoods.

These “manoeuvres”, as the members call them, began in Dallas but have since spread to other cities across the US. The marches are intended to show communities of colour that they can protect and police themselves.

As of yet, there have been no incidents during the marches, but according to the Dallas Morning News, the Dallas Police Department (DPD) has surveilled the group from unmarked cars as they are patrolling.

The guiding ideology behind HPNGC comes from Point 7 of  Newton’s 10-Point Programme, which contends that police brutality can be ended by “organising black self-defence groups that are dedicated to defending our black community from racist police oppression”.

“What we are promoting is that all black men and women who are legally able to buy weapons arm themselves. This is so they can protect their families first, and their communities second,” Omowale said, planting his finger firmly on the table with calm determination for each point.

Rakem Balogun, a 31-year-old member of the HPNGC and the Guerrilla Mainframe, a Dallas-based organisation that teaches the importance of nutrition, organic farming, and the benefits of vegetarianism to the black community, echoed Omowale’s sentiments concerning police interaction with his community.

“They don’t relate to us, and they aren’t patient. It’s like zookeepers dealing with animals in a zoo,” he said, with audible frustration.

Balogun argues that while police have always been an oppressive force in black communities across the US, citizens now have access to recording devices such as smartphones that allow the public to hold law enforcement accountable.

“Now people are more alert, and more aware of how frequent and devastating police terrorism can be for the black community, and all communities of colour,” he said.

Collette Flanagan’s son Clinton Allen, 25, was shot dead by DPD officer Clark Staller in March 2013. Allen, who was unarmed, was shot seven times, including once in the back.

“I think that everyone was taught that  when something is wrong, you call the police. They help you,” Flanagan told Al Jazeera.

“When they kill your child, there’s no chaplain that comes to your house. There’s no committee you can talk to,” Flanagan said.

After the initial news of her son’s death, she said the police department wouldn’t answer her phone calls, and that she spent hours waiting in vain for interviews with high-ranking officials.

Flanagan alleges that the DPD officers did not follow proper protocol during the event that led to her son’s death.

According to testimony from a wrongful death lawsuit that Allen’s parents filed against the DPD, an eyewitness said Allen attempted to follow the police officer’s instructions, and “saw no aggression, no fighting, no acting out or anything from [Allen], but still, the policeman kept shooting him”.

The experience of losing her child and what she described as the lack of cooperation from the DPD prompted Flanagan to form  Mothers Against Police Brutality (MAPB) in 2013, a civil society group that fights to put an end to police killings and represents more than 200 families who have lost loved ones.

“They wouldn’t speak to us as a family when [my son] was killed, but now they have to. We’re a national organisation,” Flanagan said.

She added that MAPB works with politicians at both the state and national level, though declined to name those with whom she has had conversations, to enact changes in legislation to combat what its founder sees as “near-total police impunity. It’s been 40 years since any police officer was brought to justice [in Dallas] for killing an unarmed person”.

The last officer in Dallas to have been convicted for murdering an unarmed suspect was Darrell L Cain, a police officer who shot 13-year-old Santos Rodriguez while he sat handcuffed in the back of Cain’s police car.

Cain was found guilty of murder with malice in 1978, and sentenced to five years in prison.

Staller, the officer who shot Allen, said that there was a struggle and that he feared for his life. After the shooting, Staller was treated for abrasions on his neck. The DPD alleged that Staller’s actions were justified, and in October 2013, a Dallas County grand jury agreed. Staller was not indicted for homicide.

For its part, the DPD attempts to maintain a higher level of transparency than most police departments in the US. It released a list of all the officer-involved shootings in 2013 and 2014, which total 42. Of these, 18 resulted in deaths, and only two of the suspects were listed as “unarmed”.

Hands and a screwdriver

However, some of these classifications are controversial.

For example, Jason Harrison was killed in June 2014, and is listed as wielding a screwdriver. Harrison was a 39-year-old schizophrenic whose mother, with whom he lived, called the police when Harrison began acting strangely.

Two DPD officers arrived, and within five seconds of issuing their first command, Harrison was shot five times, including twice in the back. This became evident when a video of the incident was released by the DPD more than nine months after the incident occurred.

The DPD did not respond to Al Jazeera’s request for comment.

Flanagan said that while protests against police killings are important, they create only a moment of outrage. MAPB, by contrast, hopes “to create a movement”, she explained.

“We, the mothers, are the biggest stakeholders. It’s up to us to show that things can change, and MAPB wants to equip mothers with the tools they need to exercise the power we already have.” 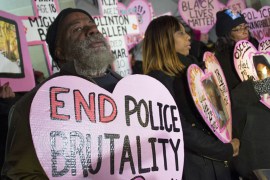 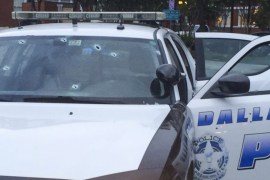 Lone suspect drove through police HQ with armoured car before opening fire and planting at least one pipe bomb. 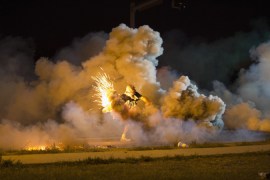