As Greeks prepare to vote on whether the country should accept the terms of a new government, a 29-year-old from the UK has devised his own solution to Greece’s national debt.

Thom Feeney’s crowdfunding page to raise the 1.6bn euros ($1.8bn) the Greek government owes in arrears promises Greek-themed gifts of varying value to anyone who contributes.

The initiative gained such popularity that host site IndieGoGo temporarily crashed as it struggled to cope with the numbers of people trying to donate.

Donations are still coming in, even though Greece already officially defaulted on the repayment of the loan.

Despite the donations, it seems unlikely the campaign will succeed, economists agreed.

When asked whether the bailout fund would emerge victorious, economist Robert Kahn, a senior fellow at the Council of Foreign Relations gave Al Jazeera a resounding “No”.

“It’s not going to raise enough money, that’s the real reason. I was thinking about this though, there’s some history where in crises some countries have benefited from the support of private citizens abroad,” Khan went on.

“For example in 1997/98 in Korea, money flowed out from Korea to support children and families, but when the crisis hit, that reversed – it was a patriotic return. That was a material part of their adjustment,” explained the economist.

“It’s not quite the same thing we are talking about here, but there are instances when you have this willingness to put money up for a country in distress and it can make a material difference, I am not averse to it as a principal,” Kahn said.

Kahn told Al Jazeera that even though the campaign was unlikely to be successful in its ultimate goal – it was sending a strong message.

“It is a signal of support and that there is help there,” he said.

“The reality is though, that really the only path forward for Greece in the eurozone, if indeed they should be in the eurozone, involves some pretty tough policy moves and a lot of financing and debt relief. I am not convinced it is going to make much of a difference. It is more of a political statement,” concluded Kahn.

That political statement comes at a volatile time for the people of Greece, who on Sunday are voting on what many see to be the country’s future in the EU.

If the “No” vote wins and Greece rejects the terms of the bailout outlined by the IMF and the European Central Bank, many will see it as a move towards the infamous “Grexit”.

A “Yes” vote will effectively spell the end of Greece’s Finance Minister Yanis Varoufakis, who on Thursday told Bloomberg: “I prefer to cut my arm off rather than sign an agreement without debt restructuring.”

I prefer to cut my arm off rather than sign an agreement without debt restructuring.

For Athens-based Nikos Moumoris, the crowdfunding campaign set up by a man from York has an importance beyond its financial efforts.

“It is always nice to see this kind of support from people … you will never meet in the physical world, but it is the people on the ground who suffer the most and this will be always the case,” he said.

“I doubt the crowdfunding effort will yield the stated results, but I think it serves most for the awareness of people abroad and the support of people in my country who, apparently, advocate a ‘No’ vote.”

Giannis Arkoudos, a web designer from Athens thinks the message is positive regardless of whether the country votes “Yes” or “No”.

“To be honest, I personally don’t consider the movement as equivalent to a wish against a Grexit, but more as a reflection that people understand our country’s situation over the last five years, and as a pledge of support for any tough days still to come – whether we remain in, or leave, the EU, the wounds are deep, and this help is more than welcome,” Arkoudos said.

“I don’t see the solidarity of the movement as a yes or no factor. My reaction is more that ‘these are the friends we want’,” Arkoudos added.

“Greece of course needs to stand on her own two feet. Crowdfunding is never the best way to solve problems, though it is perhaps one way of surmounting a momentary setback. But if we do not solve Greece’s deep structural problems the problem will recur, and the money will never be sufficient,” Arkoudos said.

Campaign founder Feeney has said his idea was born out of frustration with the politics surrounding the bailout, and that he wanted the gifts people receive for donating to be all sourced in Greece to help stimulate the economy.

“I was fed up of the Greek crisis going around in circles, while politicians are dithering. This is affecting real people. While all the posturing is going on, it’s easy for the politicians to forget that. I just thought, sod it, I’ll have a crack,” Feeney said in a statement to journalists.

“This isn’t just about Greece, but about the Greek people, the working classes and trying to help other ordinary people across the world. If governments, corporations or banks won’t help, what can we do but band together,” the statement said.

“If we don’t reach that target, what a wonderful message it sends out. It shows that whether you’re a working class lad in Yorkshire, Scotland or Athens, other people around the world care about you, even if your government has forgotten. You can make a difference.”

Feeney also said that if the campaign is not successful, the money will be returned to the donors.

Not everyone in Greece, however, sees the campaign as a show of solidarity.

Sotiris Koukios from Alexandroupolis said that the terms “solidarity” and “charity” were too often confused.

“Charming initiatives are always charming,” he said. “As a concept, it is not something negative, on the contrary [the campaign] could help Greek product marketing, but I doubt that 10 euros [$11] for a bottle of ouzo is what the country needs as support.

Actually I don’t see it as a form of solidarity. Sometimes we mix charity with solidarity.”

Koukios does not think the political fallout from the campaign will be enough to change the minds of politicians or the public.

“Civil society in Europe has the power and should put pressure on the EU through parliament and through campaigns to change the attitude of European public towards the country.”

“Greeks have been accused of many things in the last five years. It’s not a donation that would solve the problem nor marketing. Political pressure is needed urgently!”

Feeney’s efforts, though, have certainly struck a chord across Europe, with the majority of contributors so far being from the UK, Germany, and France.

“It shows that so many people care about giving to people when they need it most, not kicking them while they’re down. To help an economy recover we need investment and stimulus, not cuts and austerity,” wrote Feeney.

RELATED: Greece and the passing of the nation state

More than 80,000 people have contributed to the campaign since it launched on June 28, and by Feeney’s reckoning, if each of the EU’s 503 million citizens did the same, the target would be reached.

Whether or not that happens seems to many to be less important than the spirit behind the idea.

“It is more important in showing there are people out there who want their governments to show more flexibility,” Kahn told Al Jazeera.

“People are showing they have empathy for the Greek tragedy.” 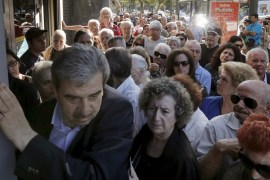 Leaked letter by Tsipras obtained by UK newspaper says country will still insist on some changes to creditor terms. 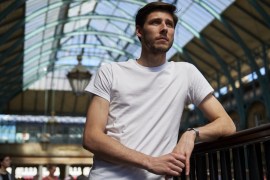 Online crowdfunding drive to bail out Greece has raised more than 500,000 euros in two days.