It’s been 35 years and nine days since the former Palestinian prisoner was force-fed. “The pain was larger than words,” Abdulrahim Nubani told Al Jazeera.

Although he spent 20 years in Israeli prison between 1974 and 1994, he says that he can’t think of a day worse than that when his name was called and he was accompanied to the prison clinic on July 21, 1980.

Until then Nubani says he had only heard of force-feeding. “It was used to break spirits, not to feed prisoners – it was torture,” he says.

“There was a pot of boiling water and a plate of rice pudding,” Nubani recalled. “I sat on the chair, an officer asked me to eat. I refused – I told him I was hunger-striking.”

Trembling, he described how he was tied down to a chair, stripped off his clothes.

“They tied me down and brought a tube, shoved it down my nose and pushed – I felt my head exploding, down to my stomach,” Nubani said recreating the scene. “I felt my stomach burn. It was empty and they gave us hot water and salt, lots of salt. I was bleeding and powerless.”

An image, no doubt, will cross the minds of hunger-striking prisoners and those who plan to hunger strike in the future now that Israel has authorised force-feeding.

Nubani’s word of advice: suck it up. “[Prisoners] have to take it and be patient,” he says. “Resistance has so many facets and one shouldn’t expect mercy from the enemy.”

The Palestinian prisoner movement has a history of at least 26 hunger strikes. The first dates back to 1969, but the most well known remains the hunger strike of 80 prisoners in Nafha back in 1980, in which Nubani took part.

It is when two Palestinian prisoners – Rasem Halaweh and Ali Ja’fari, died due to forced-feeding and two others died later of medical complications.

That, however, didn’t stop Palestinian prisoners from resorting to hunger strike as a means to protest. That is the only weapon, they say, they have to demand their rights while inside Israeli jails.

Re-introduced by Khader Adnan in 2012, hunger strikes were used by individual prisoners who had political demands – trial or release.

Adnan was released after a 66-day long strike to protest his administrative detention, a practice that allows Israel to detain prisoners without charge for renewable six-month periods.

Others followed suit and mass hunger strikes took place to demand an end to Israel’s policy of administrative detention. The latest was launched by 120 prisoners in 2014, who refused food for 63 days to protest their detention by Israel without charges.

He was detained last year again, but after another 56-day hunger strike he was released on July 12.

Of around 6,000 Palestinians in Israeli jails, nearly 400 are in administrative detention. They are threatening to go on hunger strike to defend their rights. One, Mohammad Allan, has been on hunger strike for the past 43 days demanding to be released.

Allan, 30, was last arrested in November 2014 and has had his administrative detention sentence of six months renewed twice since.

Allan’s mother, 65-year-old Ma’zuza could hardly complete a sentence without crying. “I’m a mother; I’ve spent nights up looking after him… I’m so scared,” she says.

Mohammad had called her a couple of days before starting his strike, she says. He told her that the Israelis were holding him without charges.

“I didn’t sleep since he started his strike, now that this law was introduced I feel I’m a 100 years old,” she says. “I’m terrified.”

She paused, then surrendered to her tears.

Back at his home, Nubani went through pictures of his old prison mates in Nafha. “It’s history now. I’m proud to have been part of it,” he says. “We beat death.” 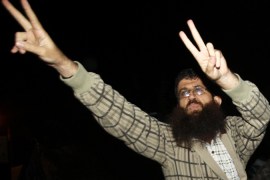 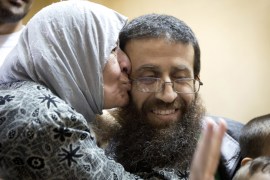 Freed from jail after 56-day hunger strike, Palestinian activist is greeted by cheering relatives and supporters.