Bastar, Chhattisgarh – The pathway to peace in India’s “Red Corridor” conflict zone is blocked by deadly obstacles – but hope is emerging from an unexpected route.

In a region where hundreds of lives have been lost in battles with ultra-left fighters in recent years, most locals are denied the basics of modern living such as roads and electricity. However, real attempts by authorities to provide these necessities are having a positive effect in the decade-long conflict with Naxal rebels.

“We have found that wherever we have built roads, Naxal presence has diminished in those villages. It is the only way forward,” Bastar district’s superintendent of police Ajay Kumar Yadav told Al Jazeera.

Kaknar, on the banks of the Indravati River, is more fortunate than most tribal villages in the central state of Chhattisgarh, the epicentre of the Maoist movement.

Security forces battling the fighters have set up camps there, and new roads are being built to reach the nearest town of Lohandiguda through dense forests which cover almost 60,000 square kilometres – or 41 percent of the entire state.

Even so, getting medical treatment is still problematic – the nearest drivable road is 15km away from Kaknar, although four years ago, that distance was 25km and involved a six-hour trek across hilly terrain.

“Things get a little complicated if there is a pregnancy,” said Devisri Yadav, a 40-year-old villager. “In such cases we build a dhola [a type of palanquin] and four men will carry her uphill to the hospital.”

Though, “most deliveries take place in the village itself with the help of midwives”, Yadav told Al Jazeera.

The government has installed solar panels, and Kaknar finally has electricity, but authorities say the rebels make it difficult to modernise most villages in the region.

“They feel that roads will lead to entry of government machinery, mobile phone towers will connect villagers to the world outside, and buildings with permanent roofs could double up as shelter for the armed forces,” Kataria told Al Jazeera.

“Smaller facilities like hand-pumps [for ground water] and makeshift school buildings are allowed. So we are fighting for basic stuff here,” Kataria said.

The government’s response is two-pronged.

According to the Central Reserve Police Force’s deputy inspector general, on the military side, it has brought in 40,000 troops in 28 battalions of the CRPF, four battalions of the elite anti-Naxal squad CoBRA and a special task force for surgical strikes.

These numbers are matched by state police and local forces as they take on an estimated 6,000-8,000 Naxals.

In Bastar, a 40,000-square-kilometre region larger than Belgium or Israel, the office of the Inspector General of Bastar records show more than 500 encounters with Naxal fighters between January 2012 and June 2015.

During this period, 111 rebels were killed in gun battles, along with 600 security-force casualties, while 178 civilians died in the crossfire.

Once the rebels are pushed back from an area, contractors come in under armed guard to begin laying down tar roads.

“For mobilisation of security forces, for any kind of economic activity, for government schemes, hospitals and ambulances to reach these tribal areas, it is only roads that will help,” Sinha said.

Security forces also try to win the confidence of the locals by organising feasts at camps and police stations in the villages.

Small gifts of shawls and saris are distributed to illustrate the benevolence of the government, which hopes to show the tribal people that Naxals have nothing to offer.

‘Fear is a big factor’

The solution may seem simple, but the problems are many.

A proposed national highway from Sukma to Konta in Chhattisgarh, which would ensure a large trade with the neighbouring state of Andhra Pradesh, has remained on paper for the past 10 years.

These two districts are Naxal strongholds, so government tenders have gone unclaimed despite the promise of around-the-clock security from the CRPF along the project’s 100km length.

“The large companies which build highways in other parts of the country simply do not want to risk taking up contracts in Naxal areas. Local contractors are few and very small – they do not have the skill or manpower to take up a 100km project,” Kataria said.

They nonetheless play a key role in getting roads built, Kataria explained and the local district modernisation committee is able to sanction above-rate charges in these circumstances so that work can begin – albeit progress is very slow.

The fear factor created by the insurgents also makes it difficult to fill government posts in Chhattisgarh.

Government officials regard roles in rebel areas as “Kalapani” – the Hindi name for the most fearsome jail in the Andaman Islands during the British colonial era, said Alex Paul Menon, Sukma district’s collector.

“Everyone is afraid because the government must be accessible – which means just about anybody can walk into your office, shoot you and leave,” Menon said.

This means teachers and doctors are reluctant to move to conflict areas. In many villages, school and hospital buildings are unused.

Life is complicated for the villagers caught between Naxal rebels and security forces.

“Who do we trust?” asked 32-year-old Sudarshan Nag, resident of Toleng village, about 40km deep into the jungles of Darbha in Bastar.

“We are beaten by both the security forces as well as the Naxals. One calls us a Naxal informer and the other calls us a police informer. What do we do?” asked Nag.

RELATED: Q&A: The Maoists of India

The government hopes that bringing tribal villagers into the mainstream will eventually help end the violence.

Although progress is slow, for places like Kaknar, hope for peace looms on the horizon in the form of those black-topped roads snaking into the distance. 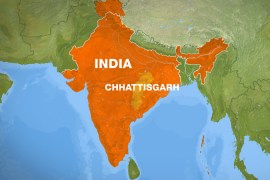 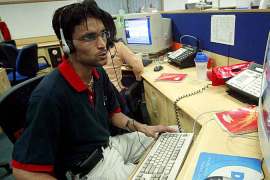 Analysis: Souring of the Indian dream 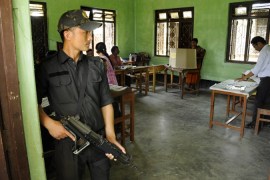