Carrying a suitcase that held all of her belongings, she began to walk.

She had no family to support her, and she did not know where to go.

“I remember that day with anguish,” she recalls. “I kept walking without a compass.”

For the next 72 hours, Pashali haunted the streets of Athens. Only when the sun fell did she stop.

“I was afraid of lying down on the bench, so I just sat,” she remembers.

Pashali is one of the many Greeks who found themselves unemployed and, soon after, homeless when the financial crisis hit the country in 2009. With few shelters and a dysfunctional welfare state, the Greek government had little to offer the throngs of people sleeping in parks and on the streets.

But despite the rise, neither the Greek government nor non-governmental organisations compile statistics on homelessness. Anecdotal evidence, however, suggests the numbers must be in the thousands.

And with the Greek unemployment rate at 27 percent, millions of Greeks today live in precarious financial situations.

Pashali’s tired face reflects the hardships, loneliness and lost hopes of the past six years. Her eyes tear up as she recounts her experiences.

“In addition to the sadness, homelessness created an inner place of freedom for me,” she says. “Everyone left me alone. And slowly, a kind of big bang was created inside me. Something new was born.”

Pashali’s life-raft was Shedia magazine. The first street magazine in Greece, it is sold by homeless people, and brings her a small, but steady income. Still, every day is a challenge for Pashali.

Aside from revealing that she used to be a secretary, she refuses to talk about her life before the crisis. About homelessness, however, she has plenty to say – and begins by explaining what it has taught her about dignity.

“Homelessness is without a doubt the consequence of the economic crisis,” Pashali says. “It’s the weakest part of the society that is affected, and I was one of them. But, in the life of a single person, the whole society is mirrored, a society that wasn’t tolerant to those who are different and was pushing everyone to live conventionally to be accepted. Otherwise you are relegated to the margins.”

For the homeless, the state offers little help.

“My first contact with social services was with the City of Athens in 2012. Back then everything was disorganised,” she remembers.”No one could provide concrete information for people that found themselves in my situation …. It was completely disheartening and so I left.”

“My brain was trying to find a solution,” she says. “The sorrow overwhelmed my existence.”

On her fourth day on the streets, Pashali found an abandoned basement. “I recreated a primitiveness in order to survive,” she reflects. “Without a mattress, without a bathroom or a shower, I had to find ways to collect rainwater, to find food and so on. It’s very difficult for a woman to forget what she was in the past and recreate a primitive lifestyle. But I can’t reveal anything further. I’m afraid words can’t describe the situation in a dignified way.”

“For a year, I didn’t have a single euro in my pocket,” she says. “I had made a bet with myself that the first euro I’d have in my pocket would be from working and not begging. I didn’t want to become anyone’s burden. I just wanted to get my dignity back.”

Pashali sought help from an NGO called Praksis that runs a day centre for the homeless. “I could wash my clothes there, I could take a shower, and they found a shelter for me,” she says. “It was important that someone listened and created a starting point for me. When a bed and a plate of food is offered to you, you think you’re in heaven. These are the basic things you need in order to create an internal calmness and feel decent and dignified.”

But she could only stay in the shelter for three months, and when her time was up she found herself back on the streets.

“How can a 56-year-old woman in this crisis manage to reintegrate into the society in just three months?” she asks. “You just can’t, and you’re back to feeling guilty. You ask yourself ‘why didn’t I find a job in that period of time, why didn’t I succeed in reintegrating into society’, and this guilt sinks you back in.”

That was when she began selling Shedia magazine. Each issue is sold for €3 (around $3.37), with half of the proceeds going to the magazine and half to the street vendors. It has provided many homeless people with an alternative to begging.

“Shedia was a lifeline for me,” Pashali remembers. “I earned my first euros this way and saw my life in a new perspective for the first time.”

Today, Shedia has more than 140 hawkers on the streets of Athens and Thessaloniki.

Pashali describes how, when selling the magazine, each encounter with people on the street feels like a small triumph

“My first post was outside the music hall, and my first client was a man in a suit with a briefcase,” she remembers. “With a very serious voice, he asked me more about the magazine, like ‘who publishes it and who writes for it?’ He said he didn’t trust NGOs, but he trusted me and would take an issue. That was my first conquest. It showed me that the truthfulness of one’s face wins over any prejudice.”

Last year, when Pashali was offered an opportunity to participate in Shedia’s photography project, she jumped at it. “We didn’t have a camera in my family,” she says. “I didn’t know anything about taking photos. Initially, I was taking photos holding the camera upside down. The beginning was a bit difficult and theoretical for me.”

For 18 months, eight homeless Shedia sellers photographed the world through their own eyes. The results were tough, but real.

Pashali went looking through the bushes at the City of Athens Cultural Center in order to find Chrisoula, a 50-year-old homeless woman, who has been living there hidden for months, trying to protect herself from the dangers of the streets.

“When I photographed her she always posed with closed eyes,” explains Pashali. “When I showed her the picture I took of her she said that wasn’t her, it was an old woman. I believe our faces are maps of our souls. I showed all my subjects their photos and all of them were shocked, they didn’t recognise themselves. Anyway we all think we’re something else and these people specifically don’t see themselves in the mirror.”

Pashali’s childhood in the working class neighbourhood of Kolonos influenced her photography.

“When I was angry and sad, I would go out looking to collect treasures,” she says. “I collected things from the street, parts and heads of dolls, empty boxes and bobbins. That’s what I did when I started taking photos. I started collecting my memories from the streets. It was a true revelation. In a way, I connected my experiences with the photos I took.”

Pashali found “small treasures” and surprises along the way.

“I’m moved when I say this, but I found true communication while photographing the homeless, the abandoned homes in Athens,” Pashali says as she wipes away a tear. “I observed the other homeless. They’ve built amazing treasure, they have unique abilities to organise and adjust, even in their nothingness. I found fascinating people, who were ravaged by their pathos.”

Today, Pashali still wears her red magazine seller’s vest and holds up the latest issue of Shedia so that passersby might see it. She is a familiar sight to many now and is often greeted with a warm smile or a ‘hello’.

“Homelessness is a hellhole,” she concludes. “My personality was dismembered in pieces. I felt like I had died. But without solidarity, I wouldn’t have been here, I wouldn’t have survived. Solidarity can save you from the fall.”

This article appears in the July issue of the Al Jazeera Magazine. Download it for iPads and iPhones here and for Android devices here. 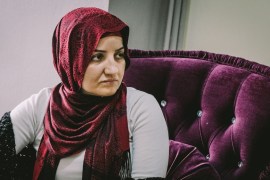 Magazine: ‘We have been sacrificed by society’

Meet the Turkish mayor urging other women to find their voice in the home, the marketplace and the town hall.