Habbaniya Tourism Village, Iraq – Down a bone-rattling gravel road, the sparkling blue waters of Habbaniya Lake rise up from the desert like a mirage.

A little closer and you can see the canvas tents on the beach that fronted one of Iraq’s most popular holiday resorts. Things here have gone terribly wrong at the Habbaniya Tourism Village.

There are 24,000 displaced people from Anbar living in the tents, in the decaying former five-star hotel, in the abandoned chalets on the beach, and in the former disco where chickens peck around the cracked pavement and women bake bread in make-shift ovens.

Halfway between Ramadi and Fallujah and cut off from any major city, the former resort is full of Anbar families too poor and powerless to find another haven.

Ali al-Hussein and his family are gathered on their only mattress on the dirt floor of one of the tents.

As a municipal worker making $300 a month, he was having a hard time getting by as it was in Khaldiya, east of the provincial capital Ramadi. Last week, at five in the morning, a mortar landed just four metres from their tiny house. So they started walking.

Most of Anbar now is either controlled by the Islamic State of Iraq and the Levant, or a military zone and soldiers would not allow any vehicles on the road.

“We walked for seven hours without food or water until we reached the camp,” he says. He and his wife were observing the Ramadan fast.

When they arrived at the camp, one of the other displaced families lent them a thin foam mattress. The camp administration has only rice, beans and bread to give them to break the days’ fast. The four children sleep on the hard ground.

The family had little to begin with and they came with nothing.

This camp receives so little aid that even the simplest of services are unavailable. There is no electricity, no showers, no reliable supply of drinking water. After three days here, Hussein has calculated every cost and found it out of reach.

To buy enough electricity from a generator for a few lights is $25 a month he says.

Transportation to the bridge between Anbar and Baghdad would cost him almost $100 – more than week’s salary. Once there only Iraqis with friends or relatives in Baghdad or air tickets out are allowed to cross.

“We would need another 40,000 dinars to get from the bridge to Baghdad and then in Baghdad we would need to rent a house,” he says wearily.

Hussein remembers what the resort was like before – beautiful trees and gardens and an amusement park.
At home he has photos with his friends at the tourist village.

“I always take those photos out and look at them – the photos are still in my house. I left all those memories in my house,” Hussein says. And then, overwhelmed, he starts to cry.

There isn’t even a tissue.

“To return to our homes has become a dream, not just for me but for all Iraqis,” he says. “In other countries people dream of big achievements. In our country we just dream of living in peace and security.”

The tourist village was built by the Iraqi government in the 1980s on the shores of a huge man-made lake. It quickly became Iraq’s premiere resort.

“There is a nightclub on the upper floor of the hotel,” it notes.

“You should have been here 10 minutes ago,” says the head of the residents’ committee when we arrive at the former five-star hotel, where sewage from the walls.

“There was a riot over ice.”

With no electricity, donated blocks of ice are a luxury. There is never enough to go around.

The balconies facing the beach still look out over the lake but the hotel has no furniture, no electricity and no running water.

Hassan Ali Saeed is one of the original residents. He comes from Fallujah with his family in January last year after his house was destroyed. He and his two wives and 15 children share the modestly-sized hotel room.
In the corner is a box from an aid organisation containing cleaning supplies.

“We need food,” he says. Because of the difficulty in getting here, flour costs almost twice as much as it does outside.

“There was no other place we could go,” says al-Saeed. “There are people who have millions of dinars or they have dollars – they go to Erbil or outside Iraq. But only the poor who can’t find anywhere else come here.”

Obama and the myth of the generational war

Whatever the outcome of the Iran talks, Obama’s larger regional policies and absence of vision will fail the world. 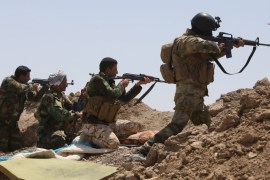