Last week, when the UN Human Rights Council voted on a resolution condemning Israel for its military offensive in Gaza last year, India chose to abstain.

Experts say this signalled a “significant” diplomatic shift in India’s policy towards Palestine. Last year, when the UN High Commissioner for Refugees (UNHRC) voted to launch an inquiry to investigate “all violations of international human rights law and international humanitarian law” during the 50-day Gaza war, India had voted in favour.

Daniel Carmon, Israel’s ambassador to India, was quick to thank the world’s second-most populous country for its abstention.

We appreciate votes by members of @UN_HRC ,including #India, who did not support yet another anti Israel bashing resolution.We thank them🙏🏽

India has traditionally supported the Palestinian cause, and voted in its favour at the UN. India also runs a representative office in the occupied West Bank city of Ramallah, the de facto capital of the Palestinian Authority.

Speaking to the Hindu newspaper, the Palestinian ambassador to India termed its decision “shocking” and a “departure from New Delhi’s traditional position”. Adnan Abu Alhaijaa said India’s policy shift seems to have been “affected by the burgeoning military relationship with Israel”.

But India’s foreign affairs ministry maintained that there was no change in India’s “long-standing position on support to the Palestinian cause”, explaining that the resolution’s reference to the International Criminal Court (ICC) was the reason it abstained. India has not signed the Rome Statute, which established the ICC.

However, Harsh Dobhal, a former journalist now teaching at India’s Doon University, believes that “there is a larger shift in India’s diplomacy”, which he said began in 1992, when the Indian government established diplomatic relations with Israel.

“India has been an ardent supporter of the Palestinian cause, and to abstain means not neutral; it’s a political decision,” said Dobhal. “It should mean that India will no longer support the Palestinian rights forcefully as it did in the past.”

The UN resolution backed the UNHRC report which found evidence that war crimes were committed by both Hamas and Israel during the conflict.

At least 2,139 Palestinians, most of whom were civilians; and 67 Israeli soldiers, along with six civilians on the Israeli side, were killed during the war.

An Israeli government investigation absolved its soldiers of war atrocities, but a report by an Israeli organisation called  “Breaking the Silence” alleged that indiscriminate fire by Israeli soldiers was responsible for killing Palestinian civilians.

Before the 1980s, India’s foreign policy was based on solidarity between countries in the global south, under the banner of the Non-Aligned Movement, of which India was a founding member. But its foreign policy stance has been changing in recent decades, since India liberalised its economy in the early 1990s.

Vivek Mishra, a PhD scholar at the School of International Studies, Jawaharlal Nehru University, said India’s diplomacy is now guided by “national interest, and should not be read in the light of it being anti-Palestine”.

“Reading India’s step as being solely anti-Palestine and favouring Israel would be a fallacy, particularly because India also recently concluded Foreign Office consultations with Palestine and assured Palestine of its support,” he told Al Jazeera.

India’s deepening defence ties with Israel is one factor that has brought the two countries closer. The Asian giant is Israel’s biggest defence buyer, spending $10bn in the past one decade.

“If there is a single factor that can be listed for India’s growing bonhomie with Israel, it is because of India’s growing need in the defence sector and steps against terrorism,” Mishra told Al Jazeera.

Modi succeeded in attracting billions of dollars of Israeli investment to western Gujarat state when he was the chief minister. He visited Israel in 2006.

When Netanyahu was re-elected prime minister earlier this year, Modi tweeted in Hebrew and called him a friend. The two leaders also met on the sidelines of a UN General Assembly meeting last September.

And later this year or early next year, Modi is likely to visit Israel – the first such trip by an Indian prime minister.

The Israeli media has applauded the perceived change in India’s foreign policy. Haaretz called the step a warming-up of relations, while columnist Itamar Eichner, writing for ynetnews.com, referred to it as “a romance between Jerusalem and Delhi”. 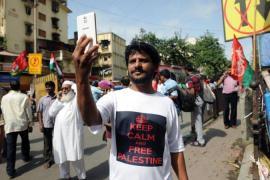