Shoppers pass a peeling mural depicting a pair of men holding rifles. Their blackened, hooded heads are bowed in honour of slain members of the Ulster Volunteer Force, a notorious Protestant armed group.

Northern Ireland’s 30-year-long “Troubles” ended with a peace agreement in 1998, but on the Shankill Road the scars of violence remain. Corrugated iron “peace walls”, up to eight-metres high, separate residents from nearby Catholics. The area is among the most deprived in the whole of the United Kingdom.

Now Shankill Road, and the rest of this country of more than 1.5 million people, is bracing itself for further economic woes amid a deepening impasse over proposed welfare reforms, which some fear could bring down the devolved power-sharing Stormont assembly in Belfast.

Northern Ireland’s rival nationalist and unionist blocs are divided over hundreds of millions of pounds worth of budget cuts, mandated by the UK government in Westminster.

On Tuesday, cross-party talks in Belfast aimed at preventing the collapse of the power-sharing executive failed to resolve a standoff over welfare cuts. Unless a deal is found soon, Northern Ireland faces the prospect of bankruptcy.

“Welfare reform is a huge issue right across Northern Ireland, it cuts across social boundaries,” says Winston Irvine, a community worker on the Shankill Road and a spokesman for the loyalist Progressive Unionist Party (PUP).

“We are talking about a £600 million [$922m] black-hole in the Northern Ireland budget that has huge ramifications for people who are already struggling with huge inequalities,” Irvine says.

“Unemployment here is above average. Educational attainment is obscene in some Protestant working-class communities. We have high rates of suicide.”

The nationalist SDLP and Sinn Fein, the political voice of the Irish Republican Army during the conflict, oppose spending reductions, which they say would hurt the most vulnerable in society. Both major unionist parties, the Democratic Unionists and the Ulster Unionists, have warned that cuts are inevitable.

Democratic Unionist leader and Northern Irish First Minister Peter Robinson has insisted if no deal is struck he will ask the UK secretary of state to repatriate control of welfare policy back to Westminster. Such a move could destabilise the power-sharing government in Belfast.

“The crisis around welfare and the economy has tested even the most stable of states. Here it is tearing us apart,” says Duncan Morrow, professor of politics at the University of Ulster.

Welfare reform is particularly sensitive for Sinn Fein, which is wary of damaging its standing in the Irish republic, where the party is riding high in polls on a platform opposed to spending cuts.

“Sinn Fein want to be the peace party and the anti-austerity party, but those things are moving apart in the north,” says Morrow.

The current crisis is a reflection of the continuing dominance of constitutional politics in Northern Ireland more than a decade-and-a-half on from the end of the Troubles, says John McCallister, an independent unionist member of the Stormont assembly.

“We live in this bubble, a policy-vacuum bubble with no ideas. Our only policy is ‘the Brits ought to send more money’,” says McCallister.

Ahead of the recent UK general election, both Sinn Fein and the Democratic Unionists called for significant increases in government spending in the region.

Northern Ireland’s power-sharing arrangements require both nationalists and unionists hold power in government. With no formal opposition and little threat of losing support to parties on the opposite side of the sectarian divide, politicians often have little to gain by reaching effective compromises on big issues.

“The Northern Ireland government is great at opening things, great at going to New York [on trade visits], but when it comes to governing, making decisions that are tough and unpopular, they haven’t been up to it,” says McCallister. “We haven’t matured into a functioning democracy.”

Certainly traces of the dark days of the Troubles remain. Paramilitary groups are still active in many parts of Northern Ireland. In working-class urban communities so-called “punishment beatings” are all too frequent. Intimidation and forced evictions are common, particularly in loyalist areas of Belfast.

“The question nobody is asking is 20 years after the ceasefires, why are the UVF [Ulster Volunteer Force] and the UDA [Ulster Defence Association] still there? What is their role?” says Neil Jarman, director of the Institute for Conflict Research, in Belfast.

Wanting to move on

Political life in Northern Ireland remains framed by the Troubles. Almost every senior figure at Stormont was involved in party politics during the conflict. There have been few new faces on government benches, particularly on the nationalist side.

Signs are emerging that the electorate is tiring of this staid status quo. At just 58 percent, turnout in Northern Ireland was the lowest of the four UK nations in last month’s general election.

There were few major surprises, but Sinn Fein did see its vote fall slightly, losing a seat in Fermanagh/South Tyrone. In the republicans’ West Belfast stronghold, a left-wing candidate took almost one-fifth of the vote. Despite losing its sole seat, the avowedly cross-community Alliance Party polled a record high in east Belfast.

Northern Ireland is increasingly Janus-faced. The paramilitary insignia and national flags are unlikely to be taken down on Shankill Road and its republican equivalent across the peace line any time soon. But a kilometre or so away in Belfast city centre, young people mix freely without any talk of religion or politics. 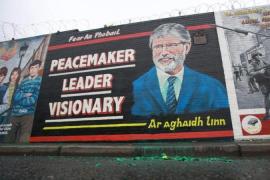 Is Northern Ireland’s peace on the rocks? 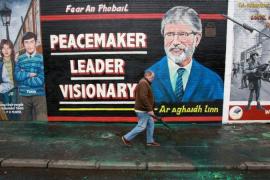 Contending with the past in Northern Ireland

Victims of the violence in Northern Ireland and their families still await justice.