It has become commonplace in South Korea that people scroll down their smartphone or tablet screens to read their daily dose of cartoons, while commuting by bus or train, or walking on the street.

The popularity of Korean ‘webtoons,’ a mixed word using web and cartoon, has been rapidly rising, spilling into dramas, movies and games.

We all remember the time when the only way to get weekly comics was to wait at a bookstore and buy cartoon magazines.

But now, with the advent of the internet and smartphones, for many South Koreans that has become only a nostalgic childhood memory.

In the early 2000s, people began to scan published comic books and share them illegally through file-sharing websites.

The image quality of scanned comics was not satisfying but free. It was a significant blow to the already faltering comic industry with the market shrinking to $389m.

Cartoonists started to draw bespoke, original content specifically for online consumption – designed in a way that people can easily read by scrolling down the screen.

The webtoon industry in South Korea, which continues to thrive, was estimated to be worth $153.5m in 2014, according to an estimate by the Ministry of Culture, Sports and Tourism.

Research shows there are 4,661 webtoon artists drawing 4,440 webtoons and publishing them through online platforms such as the country’s largest portal services Naver and Daum.

Webtoonist Kim Yang-soo, who writes and illustrates for a few webtoons, with a huge fixed fan base, was originally a music journalist who drew cartoons as his personal hobby.

He told Al Jazeera that he switched to become a full-time webtoonist as he saw an opportunity in the growing webtoon market, and that his current income is much higher than he could imagine as a journalist.

Webtoonists publish their pieces through major online platforms. Primarily, they make a living by earning cartoonist’s fees for each piece.

Some famous webtoonists earn as much as $5,000 to $6,000 for each episode from platform companies.

In addition, they make profits by drawing commercial advertisements, participating in product placement advertisements, or having readers pay to read the latest episodes in advance.

Some webtoons are translated into other languages such as English, Japanese, Chinese and Thai. Kim’s latest collaborative work, ‘Aisopos,’ is also translated into English.

The South Korean government aims to promote another wave of Korean culture with its growing Webtoon industry along with its K-Dramas and K-Pop, which have already swept across Asia since early 2000s.

More than 50 webtoons have been recreated into more value-added dramas and movies with some even remade into games.

According to an industry report, the sales of character products and office supplies went through the roof after the drama went on air. 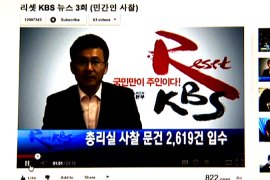 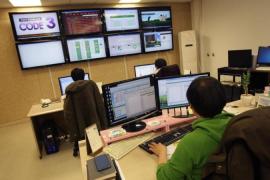 Who was behind South Korean cyber-attacks?

Cyber-attacks on government sites and major financial institutions have become an annual event in recent years.