Chile has entered the final of the Copa America regional football championship, one of the world’s most watched sporting events, after defeating Peru in the semi-finals.

Chileans have become famous for being among the world’s most fanatic fans: they don’t just sing their National Anthem before a game: they roar it out, as though their hearts are bursting with patriotism.

But one thing many may not be so proud of, is the latest football scandal to have made world headlines. It has nothing to do with FIFA, but rather with one of their top player’s finger.

Defender Gonzalo Jara has been suspended for “unsporting behaviour”, for sticking a finger up an opponent’s backside during last week’s quarter final against Uruguay. The provocation enraged his Uruguayan opponent, who was expelled from the pitch, allowing Chile to win 1-0 more easily.

The gesture had only taken a split second. The referee didn’t see “the finger of God”, as it has been jokingly dubbed, but the almighty television cameras did.

And speaking of Uruguayan players, can anyone forget Luis Suarez’s memorable teeth, which he used to take a bite out of his Italian opponent during last year’s World Cup? It is still remembered in Suarez bottle openers.

But jokes aside, these incidents are not as rare as they seem. They are only more noticeable than they were in the past, when there were not hundreds of cameras simultaneously shooting every angle of every move on the pitch.

Cameras and lip readers also capture what the players are saying, which is why these days you usually see Argentina’s Lionel Messi covering his mouth when he speaks to a teammate during a game. No wonder the referee often sees much less of what is happening than the viewer at home.

The Chilean finger incident has prompted many players to explain what the general public perhaps does not know. And that is that foul language and foul gestures are and have always been a part of the game.

Questioning the virtue of an opponent’s mother or sister is a favorite tactic. The idea is to provoke your rival to the point where he loses concentration or goes into a rage that ultimately leads to a sanction.

Even Edison Cavani, the Uruguayan player who was the victim of Jara’s gesture, admits that “these are things that happen in football”.

Maybe so, but it’s a tradition that may not be able to survive the scrutiny of so many high definition cameras, glued to the player’s every word and every move. 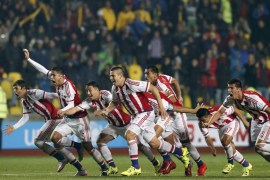 Match finished 1-1 in normal time but Paraguay set up a semi-final clash with Argentina after a 4-3 win on penalties. 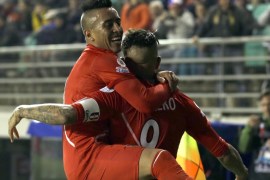 Guerrero scores hat-trick in his side’s comfortable 3-1 win over Bolivia to ease into the last-four. 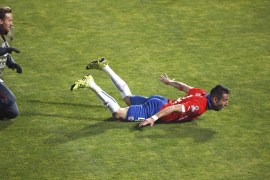