But the kinship meant nothing to the Soviet dictator and his henchmen. Svanidze was arrested and beaten to death during an interrogation in 1937, at the height of what Russians call the Great Purge, when some 720,000 people died at the hands of Stalin’s secret police in less than 18 months.

Millions were jailed, executed, deported and displaced, including entire ethnic groups or social classes, during Stalin’s 1927-1953 rule, and millions more died of famines caused by his disastrous agriculture policies.

More than 60 years after Stalin’s own death, Svanidze’s grandson, a historian and television personality, witnesses the dictator’s return as an increasingly popular, and polarising, figure.

“I constantly see people who say ‘he purged my entire family, but I still respect him’,” Svanidze, whose documentaries on Russian history are among the few examples of television shows critical of Stalin, told Al Jazeera.

“It’s a Stockholm syndrome of some kind.”

During President Vladimir Putin’s rule, the choir of Stalin’s supporters has grown bigger, stronger and louder – while critics and scholars who document his totalitarian regime’s atrocities have lost access to Kremlin-controlled media and are now branded “foreign agents”.

Public figures, lawmakers, top officials and even clerics with Russia’s dominant Orthodox Church – that suffered countless losses at the hands of atheist communists – declare their support for Stalin along with tens of millions of ordinary Russians.

In the months before and during the May 9 celebrations of the 70th anniversary of the Soviet Union’s victory over Nazi Germany, state-run television networks and newspapers ran countless shows and stories celebrating the victory – and its architect, Stalin.

The triumph over Nazism has been constantly compared to last year’s annexation of Crimea – and Putin, who masterminded the takeover, was inevitably likened to Stalin.

“It is useful for Putin to equate the takeover of Crimea and the victory” over Nazis, Svanidze, bespectacled and gray-haired, said over tea at a Moscow restaurant. “Crimea is today’s Berlin.”

Unsurprisingly, the first public monument to Stalin the Kremlin sanctioned in decades was unveiled in Crimea.

A statue portraying Stalin sitting next to British Prime Minister Winston Churchill and US President Franklin D Roosevelt opened in February in the Black Sea resort of Yalta. The statue was modelled on an iconic photo of the three taken during the 1945 Yalta Conference that shaped post-WWII Europe.

Memorial, a human rights group that has for decades painstakingly collected data on the victims of the purges, protested the emergence of the Yalta statue and urged the State Duma, Russia’s lower house of parliament, to ban all public displays of Stalin.

“Stalin’s crimes are unparalleled in our motherland’s history,” the group said in a statement in early May. “Their scope are such that the emergence of his images on public display in any positive context is inadmissible and should be legally banned.”

But the Duma rejected the request saying “a total exclusion of his image is impossible and unjust”.

In recent months, Stalin’s face has also appeared on posters, billboards, and buses in several Russian cities. The public displays and press coverage immediately boosted the number of his supporters.

Some 45 percent of Russians said the “great” achievements of Stalin’s era “justify” the victims, according to a March survey by the Levada-Center, an independent pollster. The number is up from 27 percent in 2008, Levada said.

But the poll showed how divided Russians are over Stalin – two-fifths of those surveyed said there was “no justification” to the victims of his purges.

Putin has never voiced his support for Stalin and has criticised the “ugliness” of his regime. The dictator simply seems like an effective tool in the Kremlin’s resurgent war on the West and the liberal values mostly associated with it.

“Putin does not shape his image according to that of Stalin and does not consider Stalin his mentor,” Levada-Center’s sociologist Denis Volkov told Al Jazeera.

“He is simply a useful figure,” he said. “Like pro-Kremlin journalists say, it’s a ‘cynical utilisation’ of symbols that work, that are understandable to most of the population.”

“Putin recreates many of the past communist methods of government,” Yan Rochinsky, co-chairman of the Memorial rights group, told Al Jazeera. “Without calling Stalin’s name, Putin calls upon his spirit.”

No czar, emperor, or pharaoh enjoyed more power than this mustachioed, pipe-smoking man who usually wore a raffish trench coat and spoke Russian with a thick Georgian accent. Stalin cracked down on religion, and was nearly deified in a personality cult unparalleled in human history.

He died in 1953 after defeating his swastika-buckling nemesis Adolf Hitler, challenging the West to a Manichean ideological fight, developing an atomic bomb, and turning countries from China to Czechoslovakia into his political vassals.

But decades of obliteration and criticism followed the Communist Party’s 1956 condemnation of his personality cult. The last Soviet leader Mikhail Gorbachev, and Russia’s first President Boris Yeltsin have repeatedly lambasted Stalin’s legacy, and dozens of books explored the extent of his purges.

Throughout the 1990s, his supporters were seen as marginal, radical, retrograde or not quite sane – like the elderly ladies who carried Orthodox Christian icons with his portrait during communist rallies.

These days, there are also dozens of books on Stalin, but with titles such as Stalin and Christ, Thus Spoke Stalin, or The One Who Helped Russia Stand Up From Its Knees, many of them whitewash his image.

Stalin’s purges are “a black myth that has been poisoning the hearts and minds” of Russians, says a preface to Stalin’s Repressions: The Great Lie of the 20th Century, a 2009 bestseller by Dmitry Lyskov.

The author said liberal democrats besmirched Stalin to justify their unpopular reforms by the need to dismantle the Soviet system he created.

“There is no integral evaluation to Stalin’s personality because the matter is extremely ideological,” Lyskov, who also hosts a political talk show on the ORT television channel, told Al Jazeera.

“Some groups prefer to see only the negative and push for a condemnation of the entire historic period, others [see] only the positive and put him on a pedestal just because of it.”

The Communist Party, supported these days mainly by the elderly and limited to a minority faction in Russia’s parliament, lauds Stalin as a “man of colossal intellect and high spirituality”.

In early May, communists used a legal loophole to install a bust of Stalin in the central city of Lipetsk.

But a local woman doused it with paint within hours, and the residents of an apartment building that faces the bust are now urging authorities to remove it.

“It has to be removed peacefully,” Vera Ivanova, the city’s chief architect, said in televised remarks in late May. “It was installed illegally.” 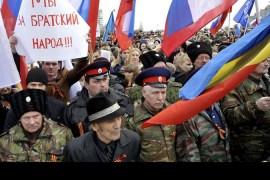 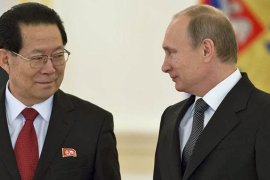 Rebirth of a Cold War alliance

Nostalgic Russians see North Korea as a reminder of a socialist paradise lost.