Ottawa – In the late summer, as villages began the preparation for winter, the trucks would tour the villages. They knew where to go and what to say.

The man from the government would explain the children were being removed, taken away from their homes and their families and given a place at a residential school.

If anyone complained or protested, they were told they were blocking what was best for the child. If that didn’t stop the words of dissent, they were warned they’d be arrested and they could spend the year in jail.

The messages that they gave, that we were heathens, we were pagans, my way of life was no good. At five years old you believe everything.

So the children left, with tears in their eyes and confusion at what they had done and where they were going.

Across Canada, for more than 100 years, children of the indigenous population, or First Nation as they are known here, were taken away as part of the policy of “aggressive assimilation”, or as one survivor put it, “They tried to beat the Indian out of us.”

Their traditions, their language and the heritage would be ignored.

“I said hi in my local language to a priest as I walked into the school on my first day. He lifted me by the ears and beat me unconscious. I was six,” said one survivor.

Canada’s first prime minister, Sir John Macdonald, believed the system was the future: “When the school is on the reserve, the child lives with his parents who are savages; he is surrounded by savages.”

In one school, there was even a crudely put together an electric chair where “unruly” boys were made to sit and a current was sent shocking through their body.

One man choking back the tears said: “I used to look at the sky and know my parents were looking at the same stars. But I felt alone in the world.”

Another said “the priest told us we were uncivilised. Then he would take us into a back room and rape us”.

It may be more. Record-keeping was poor and the guilty could hide their secrets.

Finally, the survivors as they called themselves realised they had been the victims of abuse.

They banded together and took the government to court and won. They received a settlement, the largest of its kind in the world. But they also won the right to a Truth and Reconciliation Commission where they could tell their stories.

For more than five years, the Commission travelled all over the country, gathering evidence and hearing testimony.

In a packed function room in a hotel in the Canadian capital, Ottawa, many of those who’d been abused gathered to hear the report.

Among them was Annie Johnston. She was sent to a school near her home in British Columbia at the age of five “but it could have been on the moon, I was so removed from my family”.

The abuse was constant, the humiliation unforgiving.

It was nothing less than the systematic and concerted attempt to extinguish the spirit of the aboriginal peoples.

“My brother was at the same school on the boys side. We were forbidden to talk to one another,” she told me, her eyes welling with tears.

“The messages that they gave, that we were heathens, we were pagans, my way of life was no good. At five years old you believe everything.”

It’s 50 years since Annie left the school but every day she remembers something; a moment, a smell or a sound and she returns.

She said she fed her experiences to her children.

And so another generation felt the pain and the anger.

Justice Murray Sinclair – himself from the First Nations – chaired the commission. As he stood and acknowledged Canada was guilty of cultural genocide, those in the room rose with a roar.

Their hurt, their anger, their pain had finally been acknowledged. The standing ovation lasted for minutes. People cried, perhaps unable to absorb the history of the moment.

“It was nothing less than the systematic and concerted attempt to extinguish the spirit of the aboriginal peoples,”, Sinclair continued.

“But as the survivors have shown us, they have survived.”

Beside me a woman rocked back and forth.

“Thank you, thank you,” she said almost silently. “Too long, too long.”

The commission has made 94 recommendations. This, it believes, will help redress the problems the residential school problems have caused, will begin to make amends for past evils, and aid the reconciliation so desperately needed.

“It’s time to start a new chapter in Canada where everyone is treated equally,” said Justice Sinclair.

“This is not an aboriginal issue, it’s a Canadian issue.”

The government has said it will look at the findings of the commission, which is short of accepting what needs to be changed.

But for many who made the journey to Ottawa, the report is not the end of the process. It is merely a beginning. For them, for their people and for the country which has always been their home. 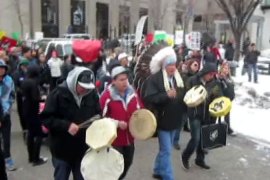 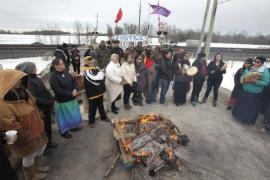