Five years on and people are still dancing to the sounds of Shakira and Freshly Ground’s World Cup hit “Waka, waka – this time for Africa” – as if it’s the first time they’re hearing it.

It just ignites such a wonderful feeling – a fire in the belly. Because 2010 was indeed the time for Africa. The continent hosted its first ever World Cup. And it was brilliant.

I was privileged enough to cover the monthlong football extravaganza as a TV sports reporter based in South Africa.

Even more blessed to have attended some big games as a spectator – vuvuzela in hand, of course!

The atmosphere was magical.

And visitors from all over the planet were loving it.

Locals were extra friendly. They wanted to show our country off to the world in the best possible way.

Fast forward to 2015 and South Africa’s sports chiefs are right at the centre of a bribery scandal that has drawn international attention.

It genuinely feels like such a cruel end to a World Cup that quite rightly takes its place in the history books.

But ask most South Africans how they feel about the corruption allegations – and lest we forget there’s a pre-World Cup match-fixing cloud hanging over the country too – and the simple answer is: “We don’t care! We had an amazing time in 2010, Blatter delivered on his promise of giving us our first World Cup and that’s that.”

If only it were that simple.

Fingers are being pointed, suspicions heightened. Did South Africa buy the World Cup?

A $10m payment to Jack Warner, former FIFA vice president, and his CONCACAF organisation is now central to answering that question.

CONCACAF – it doesn’t roll off the tongue easily, I know – are the guardians of football in North and Central America as well as the Caribbean.

South Africa’s football officials deny it was a bribe for Warner to vote for the country’s World Cup bid, instead saying it was a contribution towards the African Diaspora Legacy Programme – to help develop the game in that part of the world.

It is, of course, all rather convenient. No one had really heard of this programme before. But it can’t be dismissed out of hand.

Fikile Mbalula, our current sports minister, now has to deal with the fallout.

He maintains there was no bribe. And that South Africa would have won their bid to host in 2010, regardless of whether the $10m transfer for development was paid or not.

In the coming days, weeks, months, as we learn more about this bribery business, and as more evidence comes to light, South Africa’s reputation will inevitably lie in ruins.

It’s such an unnecessary distraction. But my feeling is that the sooner this matter is put to bed, the better.

South Africans have plenty of other major issues to worry about too. 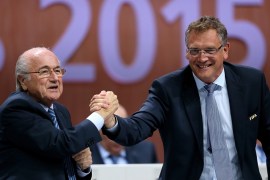 Senior staff cleared of involvement in alleged bribe for S Africa 2010 that is central to US charges against officials. 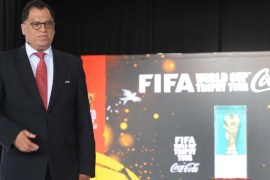 Football federation president said a $10m payment was made in 2008 but confirmed it was not bribe for the tournament. 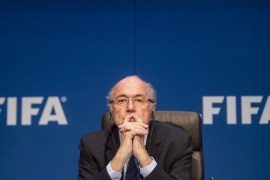