Washington, DC – As negotiators in Vienna push to complete the final terms of a nuclear agreement with Iran, President Barack Obama faces a crucial test at home – winning over a sceptical and potentially troublesome US Congress.

Opposition from Israel and lack of support from Saudi Arabia could help sink a deal in Congress if negotiators fail to achieve ironclad rules preventing Iran from developing a nuclear bomb. Recent comments from Iran suggest that will be a challenge.

At the same time, if Iran succeeds in concluding a viable UN agreement, continuing opposition by the US Congress could leave the US isolated as major trading partners – the European Union and China – move forward with sanctions relief.

“No matter how good the agreement is, it is going to come under attack,” Shibley Telhami, a professor at the University of Maryland told Al Jazeera.

“It is going to be a fight and this is what the Obama administration is bracing for.”

Iran and negotiators for six world powers, the so-called P5+1 – US, Russia, China, UK, France, and Germany – are meeting in Vienna, Austria, to conclude more than two years of talks. The parties reached a framework for a deal in Lausanne, Switzerland, on April 2.

Getting an agreement acceptable both to the White House and Congress may require last-minute haggling, even brinkmanship. Gaps remain between the sides over future access by international inspectors to suspect sites in Iran and how quickly sanctions will be lifted.

Iran’s top leader Ayatollah Ali Khamenei said in a formal address on June 23 that Iran would not dismantle its nuclear capability and wouldn’t accept a ban on research and development over the next 10 years.

His remarks followed approval by Iran’s parliament of a law prohibiting international inspections of military sites.

In Washington, the Republican-led Congress has already set up roadblocks, ramming through a law earlier this year that prevents Obama from lifting any US sanctions on Iran for 60 days after a deal while Congress reviews any agreement.

Key US lawmakers expect the talks in Vienna to extend past the self-imposed June 30 deadline. Political terms of a hastily worked out arrangement with the White House means Congress can’t sink a deal with Iran unless its terms are so weak that more than two-thirds of lawmakers vote against it.

We recognise that it's not just what the United States wants. It's whether Iran will get to where we need them to get to.

“Most likely, House and Senate have the votes to disapprove the deal but not to override a presidential veto,” said Tom Z Collina, policy director at the Ploughshares Fund, an anti-nuclear weapons group.

For now, Obama has the support he needs from his own party to continue with the talks.

Democrats have signalled they will support the president so long as any agreement with Iran meets key criteria, including so called “snap-back” sanctions which can be renewed quickly in the event of violations.

Both Democrats and Republicans warn a failure by the administration to win key safeguards from Iran on inspections could undermine Obama’s position.

“I can’t imagine a deal getting through the Congress that does not have anytime, anywhere inspection requirements including military facilities,” Senator Lindsey Graham, a leading Republican, told Al Jazeera.

“The notion that we wouldn’t have inspections on military bases is just a non-starter,” Senator Tim Kaine, a Democrat, told Al Jazeera.

“It’s the covert path we are most concerned about,” Kaine added.

“We recognise that it’s not just what the United States wants. It’s whether Iran will get to where we need them to get to,” Senator Ben Cardin, a senior Democrat who brokered White House negotiations with Republicans on the Iran deal, told Al Jazeera.

Opponents in the US Congress will try to open up daylight between what the US and its allies expect, and what Iran eventually agrees to. Iran’s critics believe they can turn underlying scepticism into outright opposition.

“What will happen with extended debate and discussion on this is it will have a definite effect on American public opinion,” Senator John McCain, the influential Republican chairman of the Senate Armed Services Committee, told Al Jazeera.

What the risk-averse members of Congress must weigh is that if a nuclear agreement is accepted by the UN, US refusal to lift unilateral sanctions would appear unreasonable, and the multilateral sanctions regime that brought Iran to the table would collapse.

“If the Americans drag their feet in lifting the sanctions, which looks likely given congressional interference, the Europeans and the Asians have already said explicitly to the Iranians that ‘If you play ball we will play ball and we will keep our end of the bargain,'” Alidad Mafinezam, president of the West Asia Council and policy adviser to the American Iranian Council, told Al Jazeera.

Doubts among American Jews about peace with Iran and the influential role of pro-Israel lobby groups in Congress, are also points of major concern for the Obama administration.

Israeli Prime Minister Benjamin Netanyahu drew applause from US lawmakers when he spoke against a deal with Iran in a controversial appearance before Congress earlier this year.

In connection with Netanyahu’s speech, the American Israel Public Affairs Committee (AIPAC) sent thousands of its members to lobby individual senators and representatives against a deal.

“If the Iranians do not agree to a regime that provides verification, inspection, monitoring and snap-back sanctions, then we should walk away in my opinion,” Martin Indyk, a senior foreign policy director at Brookings and a former ambassador to Israel, advised members of the Senate Foreign Relations Committee recently.

Speaking to a meeting of the American Jewish Committee in Washington on June 8, Deputy Secretary of State Tony Blinken sought to reassure his audience that Obama has done more than any other US president to support Israel’s security and won’t concede to Iran in the end.

“The United States continues to believe that no deal is preferable to a bad deal,” Blinken went on to say.

Winning US congressional approval is further complicated by a perception that Iran is creating regional instability in Syria, Iraq, Yemen and elsewhere.

Lawmakers are troubled by the idea that reaching a nuclear deal would amount to American acceptance of Iran’s newfound regional influence.

At stake in the outcome is not just the nuclear deal, but whether Obama can overturn the status quo of American policy in the Middle East to pursue a new opening with the Islamic republic.

“What is really going on right now is the US has been willing to contain Iran politically, militarily in the region for 20 years,” Gary Sick, a professor of international affairs at Columbia University, told Al Jazeera.

“What we are doing now is saying we are no longer willing to do that. The real way to deal with Iran is through engagement.”

RELATED: Obama to back Gulf allies against any ‘external attack’

Those tensions were reflected at Obama’s meeting with leaders of the Gulf Cooperation Council at Camp David in May. The US offered to provide security assistance and weapons sales to counter Iran’s destabilising activities.

“The Saudis fear Iran and they see the implications of an Iranian nuclear deal as undermining their interest,”  Aaron David Miller, a Middle East analyst at the Woodrow Wilson International Center for Scholars in Washington, told Al Jazeera.

US public opinion favours a diplomatic agreement with Iran, according to a series of polls taken since March. At the same time, many Americans still view Iran as a threat, have doubts about whether diplomacy will work, and want Congress to have a say in any agreement.

“What is driving American public opinion isn’t really a love for the agreement,” Telhami said. “Their greater worry is that failure of the talks will lead to conflict. 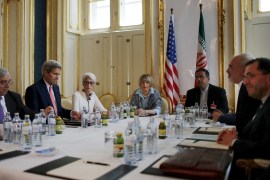 US Secretary of State Kerry and Iranian Foreign Minister Zarif say “hard work” is needed to reach agreement by June 30. 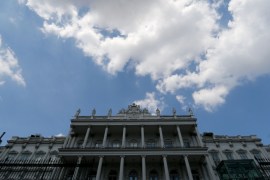