Bujumbura, Burundi –  Shrouded in darkness, with the journalists and human rights monitors locked in their homes and hotels, unidentified men with machetes, stones, automatic rifles, and grenades mete out vengeance on their political opponents.

A dark and disturbing new chapter has begun in Burundi since police violently put down the street protests that denounced Burundi’s President Pierre Nkurunziza’s decision to run for a third and, as protesters believe, unconstitutional, term. They say the decision violates the sacrosanct peace agreement that ended the 13-year civil war.

Following a spate of political violence that has killed more than 80 and injured over 400 people, key opposition parties are boycotting the controversial parliamentary election scheduled to take place on June 29.

The first few hours after darkness falls on the humid, low-rise lakeside city are often punctuated by the sound of gunfire and grenades.

Ernest Nshimirimana, a 28-year-old supporter of the ruling party, CNDD-FDD , was killed as he returned home after attending a political rally on the night of June 25. Nshimirimana lived in Buterere, a neighbourhood dominated by supporters of well-known opposition candidate and former rebel fighter, Agathon Rwasa.

At the end of the campaign rally, Nshimirimana’s friends, also members of the ruling party’s youth league known as the  Imbonerakure , warned him not to go home to Buterere.

“There could be trouble,” one told him.

But Nshimirimana ignored their advice.

At around 9pm, as he walked through the neighbourhood, a gang of anti-government men stoned and beat him to death.

A few hours later, another resident of Buterere, 29-year-old Lin Gahimbare was shot and killed by shadowy assailants inside his own house. His wife and daughter who were in the house survived.

Because the protests were stopped by force, rather than of the protesters' own volition, they feel compelled to use grenades.

The early mornings in the capital are post-mortems of the night before. Citizens gather on roadsides to inspect new dimples from bullets and grenades.

The families of the dead, usually one or two but sometimes more, gather to weep around their lost ones. Pick-up trucks or tuk-tuks, depending on the prosperity of the departed, bear the bodies off to the morgue.

But, during the late morning on June 25, an unknown man in a white Toyota Carina – a vehicle that is ubiquitous on the roads of Bujumbura – hurled a grenade at workers unloading goods on a pavement in the downtown area.

Eight casualties were rushed to the hospital and treated for shrapnel wounds.

As the temperatures in the capital rise, police search vehicles with ever-increasing scrutiny.  It is difficult, if not impossible, to know who is orchestrating the attacks.

A peace activist working in Musaga, who asked to remain anonymous for his safety, said the protesters had no option but to turn to grenades.

“Because the protests were stopped by force, rather than of the protesters’ own volition, they feel compelled to use grenades. Opposition leaders and civil society have told them to be peaceful, but the protesters say they have no way to resist peacefully – they must do whatever it takes to be heard,” said the peace activist.

North of the scorching capital, in the cool highlands close to Rwanda, residents of Ngozi, the president’s hometown and Burundi’s second-largest city, are reeling from the first grenade attack in recent memory.

Pascal Nyabenda, a 22-year-old Imbonerakure, recalled how on the evening of June 21 he stepped out of the bar where he worked to collect empty bottles from the street. Someone passing by threw a grenade which landed on the roof of the bar, sending hot, razor-edged shrapnel flying everywhere.

The grenade hit the small bar, known as Chez Didas, which was packed with Sunday evening drinkers. At least three people were killed with more than 30 injured.

Nyabenda, who grew up an orphan, raced inside to find his brother, Claver, and sister, Chantal, bleeding profusely. Later, at the hospital, he was sitting at Chantal’s bedside when he was told his brother had died. Chantal passed away a few hours after that.

Another victim of the attack, 22-year-old Sylvie Niyonkuru, was walking past the bar with her guardian’s baby strapped to her back. A week later, she is still in hospital, recovering from the shrapnel that had lodged itself inside her abdomen.

None of those admitted to Ngozi hospital have money to pay for their treatment.

Burundi is the second poorest country in the world according to the World Bank, with a per capita GDP of just $271.

Dr Philbert Sendegeye, the medical director at the hospital, said he was “astounded” by the attack. “There are no divisions here.”

The victims have no money to pay for their care, he said. “These people are poor. They don’t have the means to buy drugs. The hospital is providing the care for free, but we’re not supposed to – so it’s a loss for us,” Sendegeye said.

Independent radio stations in Burundi are all off-air, having been attacked by pro-government security forces in the wake of the failed coup of May 13.

The only national information source for Burundians is the state-controlled broadcaster, RTNB, which many believe whitewashes the problems as a mouthpiece for the government.

Reports of attacks travel by WhatsApp or Facebook to the few who have smartphones, phone calls or word of mouth.

On Friday, those in Cibitoke, a town on the western border with Congo, woke to news that the leader of the opposition party, FRODEBU, Jean-Paul Ngendakumana, had been killed and his wife injured during the night in a machete attack. The week before, the leader of the Imbonerakure in the nearby town of Bubanza was killed by a grenade.

In light of increasing tit-for-tat killings, IHS Jane’s Country Risk analysis has flagged a ruling party victory in the parliamentary poll on Monday as a “likely trigger for civil war in Burundi”.

Jeremy Ciza, a 53-year-old farmer in a rural northern province called Kayanza, knows little of these isolated incidents. But he can feel the war is coming.

There have been fewer vehicles on the main road that crosses Kayanza, he said, so sales of charcoal and vegetables on the roadside are down.

With the devaluation of the Burundian franc, and the supply chain blockages, prices of staple foods such as potatoes have risen threefold over the last year, Ciza said.

Children gather around him to listen, the  close-cropped hair on the heads patchy and patterned due to malnutrition. On Ciza’s chest, every rib is visible.

“We have a saying in Kirundi,” he said of the local dialect. “When two oxen fight, it’s the grass that suffers.” 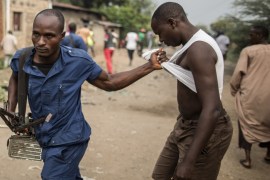 Building storing ballots damaged in the country’s northeast ahead of parliamentary and local polls. 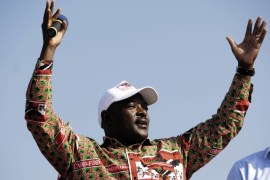 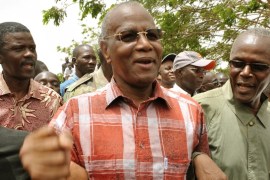 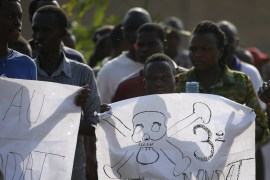 Opposition vows to keep up rallies against President Pierre Nkurunziza’s decision to run for a third term.