By
Sarah Hucal and
Drew Ambrose

On the top two floors, instead of the latest fashions, visitors can browse rows of sparse concrete cages housing leopards, monkeys, bears and even a gorilla.

Like a growing number of wildlife parks and zoos in Thailand, Pata Zoo features animal performances to lure tourists.

In one show, a trainer cajoles an orangutan in blue track shorts to lift a 50kg barbell.

“We can cheer if he can make it,” he calls to the audience.

But despite the prodding, the weary primate turns away and lies down on the floor, clearly having had enough.

While tourists queue up to watch spectacles like paintbrush-wielding elephants and boxing orangutans, activists say many of these animals are being neglected and abused, taken from the wild or sold as part of an industry worth millions of dollars.

Edwin Wiek, one of Thailand’s most vocal wildlife conservationists, says cruelty is rife in the country’s animal entertainment industry.

“It’s very acceptable for most people on Facebook or Twitter to have a selfie with a tiger or with a gibbon on the beach. People make these photographs without actually realising what’s really going on,” Wiek told Al Jazeera.

“The money being made in this business is so large. There’s still a lot of animals being taken out of the wild for these performances, and animals are being tortured on quite a big scale,” said Wiek.

Thailand recently introduced a new law making cruelty to all animals illegal. Violators can face up to two years in jail and hefty fines. Yet critics question how the laws will be read and enforced.

Wiek calls the legislation a “toothless tiger” for its lack of detail. “There’s a small paragraph on torture, but it doesn’t really define what torture is. Is it discomfort? Is it pain?”

Even the deputy director-general of the Department of National Parks, Wildlife and Plant Conservation Adisorn Noochdumrong, the person charged with enacting the new law, concedes the language is vague.

“There’s no clear definition of what kind of activity is to be defined as cruel to the animal,” he said. “For example, if the animal does not have enough food, is it a kind of cruelty or not?”

Each day, around 1,000 tourists make the three-hour trip from Bangkok to the so-called “Tiger Temple” in Kanchanaburi province. The attraction, run by Buddhist monks, is one of the only places in the world where tourists can get close enough to touch a tiger.

“At home, it’s like you do not go near the animals. You can’t, and so here it’s like a different experience because it’s out in the open,” a young tourist said before posing with a striped feline.

“How many of your friends have actually touched a tiger?” the tourist said.

Yet behind the carefree ambiance of satisfied selfie-snapping tourists lies a hotbed of controversy.

Allegations of abuse, corruption, illegal breeding and even the illicit sale of tigers to be butchered have been levied at the temple – allegations the temple strongly denies.

But without religious significance or conservation value, critics claim the 144 tigers are only housed there for one purpose: business.

Tourists pay $15 to enter, even though the temple is not allowed to charge for admission. Then there are additional fees, which the staff call “donations”, to feed, walk, and coddle the big cats.

“Twelve years ago they promised not to breed or make commercial use of the animals,” said Wiek. “But because baby tigers are so much fun to hold up and feed milk and make photographs with, they’re producing more and more.”

The temple was once again hurled into controversy after the testimony of a former insider – the long-time veterinarian.

Dr Somchai Wisetmongkolchai claims three missing tigers were clandestinely taken to Laos to be sold, butchered and made into traditional Chinese medicines.

“They assume that we have three lost cats, but I don’t think so,” said temple abbot Phra Jakkit Sanhakitteko when asked about the claim.

“I’ve been a monk for a while. I didn’t see anything happen here,” said the monk.

In recent years, authorities have investigated the temple for suspected ties to wildlife trafficking.

In the most recent raid, all tigers were officially confiscated by the Department of National Parks and Wildlife but the tigers were allowed to remain at the temple.

“All the tigers are the property of the department, if we know the temple does not follow our conditions, we’ll take the tigers back,” Noochdumrong asserted, after saying the temple had become a “tiger farm”.

Wiek feels the failed efforts to shut down the temple provide an example of the limitations of the new law.

“The government wants to close it down but they know they have to take care of the tigers for the rest of their lives,” he said.

Even Thailand’s national animal is at risk of abuse. Many elephants are brought across Thailand’s porous border with Myanmar, where they are snatched as babies from the wild and then sold into the entertainment industry.

A man whose family business is elephant trading, spoke anonymously to Al Jazeera, saying returns are high. “Last year, we sold an elephant for $50,000,” he said.

According to wildlife conservationist Lek Chailert, before they are considered fit for the industry, captured young elephants undergo a brutal training process known as phajaan, where the goal is breaking the animal’s spirit.

Chailert has built a sanctuary in Chiang Mai for elephants rescued after years of abuse in the entertainment industry. She says most were mistreated by their trainers, or mahouts, and suffer mental problems.

Her centre aims to educate animal park owners, as well as tourists, about positive ways to interact with jungle animals that don’t involve exploitation.

But activists like Chailert pay a high price for speaking out against the industry. Her sanctuary has been raided; her elephants previously confiscated. Wiek has been sued by the Tiger Temple three times – his animal rescue centre targeted by authorities.

“It’s big business. Influential people. One of the biggest elephant owners in Thailand is also the head of a very big political party,” said Wiek.

“There are ex-prime ministers that have chimpanzees and orangutans in their backyard. These are the kind of people that are opposing us.” 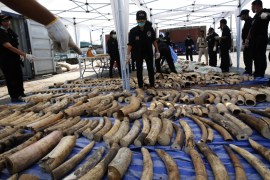 More than 700 tusks confiscated days before amnesty for ivory owners to register goods comes into effect. 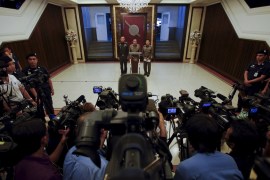 Thailand to ‘teach journalists how to ask questions’

About 200 local and foreign reporters to be summoned to meeting, reportedly to ensure questions do not upset officials.