I want to remind you of Syria.

I know on Friday there were three terrible attacks on civilians elsewhere around the world that killed dozens of people.

And I know when it comes to Syria, sometimes it is just easier to forget.

After five years of bloody civil war, the parties there are still fighting. And the rest of the world is still too divided about who is to blame to do anything to help.

But something is happening in Syria that is so horrific even the Security Council agrees it has to stop. And here is the thing: since the UN body first said so, it has only become worse.

I’m talking about the use of barrel bombs.

These barrels are packed with explosives, poisonous chlorine and scrap metal for maximum killing power and they are incredibly effective. Now the leading cause of death in Syria, they are also illegal under international law because they kill indiscriminately.

Apparently, the sound of a helicopter – the crude delivery system for these weapons – now fills Syrians with terror.

At an informal Security Council briefing on Friday, I heard heart-breaking stories from human-rights activists and emergency responders.

Like the story about the father who sent his seven- and nine-year-old children into the house when he heard the helicopters, thinking he was sending them to a safe place.

A bomb fell on the home, according to Nadim Houry of Human Rights Watch, killing the mother and injuring the children so badly, they each had limbs amputated.

Raed Saleh, a first responder with the Syrian Civil Defence, showed a video of his colleagues digging a newborn baby from beneath a three-storey collapsed building.

It took 12 hours, with great care taken not to let any debris fall on the infant.

The video of that little boy covered in dirt being pulled from a hole brought tears to many eyes in the room. And that was a rare case of a rescue attempt with a happy ending.

More than 11,000 barrel bombs have been dropped since October, according to an announcement for the Security Council meeting, which was called by France and Spain.

Bassam Alahmad from the Violations Documentation Centre in Syria said that 1160 civilians, 290 of them children, had been killed by barrel bombs since Security Council Resolution 2139 passed more than a year ago, calling for an end to these and other indiscriminate attacks.

Syrian President Bashar al-Assad denies that his forces have anything to do with these weapons, but Human Rights Watch says otherwise.

The government is the only party to the conflict with helicopters.

Other groups are indiscriminately killing civilians as well, they say, but not nearly as many as the government.

Even the Russians, who back Assad, have said these attacks are wrong. Strangely, however, they condemn the attacks and not the perpetrators.

Francois Delattre, the French ambassador to the UN, declared after the meeting that they had sent a strong political message, that the international community will never stop trying to stop these attacks.

Those who live and work in Syria say words don’t go far enough, however.

They want the Security Council to punish those who violate 2139 with sanctions and arms embargoes.

A total of 80 international human rights and aid groups also called for action in a letter to the Security Council earlier in the week.

That’s why I want to remind you about Syria.

Under international law, what is happening there shouldn’t happen to anyone. 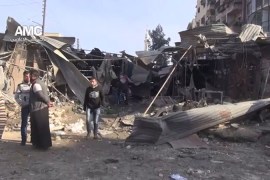