When I was growing up in Bangladesh’s port city of Chittagong, the Hill Tracts, just a two-hour drive away, were not a place you visited.

The Shanti Bahini, a guerilla outfit formed by the indigenous people native to the area, was locked in conflict with the Bangladeshi government. It was an insurgency that peaked in the 70s and the 80s, but had its roots in the withdrawal of the British in 1947.

Partition – the division of the subcontinent into Muslim-majority Pakistan and Hindu-majority India – created a lot of arbitrary divisions in the region. But the inclusion of the Chittagong Hill Tracts into East Pakistan (present-day Bangladesh) was definitely more of a head-scratcher than most.

Unlike its neighbours India and Myanmar, which are teeming with racial, ethnic, cultural, religious and linguistic diversity, Bangladesh is a very homogeneous country.

Only one to two percent of people are non-Bengali, mostly belonging to indigenous tribes, and are either Hindu, Buddhist, Christian or animist. And most of them live in the three districts that make up the Chittagong Hill Tracts – Rangamati, Bandarban, and Khagrachari.

The Hill Tracts are geographically, linguistically, and culturally far-removed from the Bengalis of the Delta. They have much more in common with the people of northeast India or Myanmar.

Since the 70s, more and more Bangladeshis have been settling there, activists say, with the backing of the Bangladeshi government.

The people of the Hill Tracts resented having Bengali identity and culture forced upon them and given their extreme minority status, feared a tyranny of the masses.

The Shanti Bahini was formed In the mid-70s and in 1977 launched its first attack on a Bangladesh army convoy.

Over the next few years an estimated thousand Bengalis were killed and hundreds kidnapped, although the death toll on the indigenous side is believed to be far higher.

So it was that the Hill Tracts, one of the country’s biggest tourist attractions, became a place few middle-class Bengalis would plan a trip to.

This began to change in the 90s, culminating in a Peace Accord in 1997. The treaty recognised the special status of the Hill Tracts. In exchange, the Shanti Bahini laid down its arms.

But the government has delivered few of the promises made in the accord. Indigenous demands for autonomy remain unheeded. And the Hill Tracts remain the most highly militarised region in Bangladesh. Drive around and it feels like an occupation, even if it isn’t being called one.

Bengali settlers also now easily outnumber indigenous people here. Tens of thousands have been displaced because of resource extraction efforts by the military and settlers, and the trend looks set to continue as the government sets its sights on developing the area for tourism.

Anti-indigenous riots are common. We talked to several indigenous politicians who say they were harassed and physically assaulted by Bengali settlers.

The biggest slap in the face was the Bangladeshi government’s announcement this year that it would ban Bengali and foreign organisations and individuals from talking to indigenous people of the Hill Tracts without supervision by the administration or the military.

What does that mean? How can a rule like that actually be enforced? That is worse than an apartheid state.

The government has since backtracked, but only a little. Foreign researchers are still prohibited from talking to indigenous residents of the Hill Tracts.

This move came not long after the state objected to the use of the word “indigenous” to describe these minorities.

We are yet to see how the Chakma, Marma and other tribes in the area respond to the increasing pressure they are being placed under.

The Shanti Bahini and its political wing, the JSS, seem like a spent force these days. But the area remains volatile.

Kidnappings don’t take place like they used to – but they still happen. Sometimes, the victims are representatives of NGOs or Bengali corporations.

While we were reporting in the Hill Tracts, we wanted to visit an area where there had been an anti-indigenous riot by Bengali settlers.

We were supposed to go with the JSS. But when we arrived in Rangamati, they said that a rival indigenous political group (not Bengali settlers) was angry that we did not go through them instead and had threatened to create trouble if we visited the riot site. A kidnapping, we were told, was on the cards if we showed up.

Given these splinters that are showing up, the resentment locals feel that will inevitably grow and the strategic location of the Hill Tracts next to both Myanmar and India, a renewal of violence in the area is something all three governments could do without. 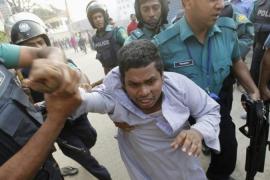 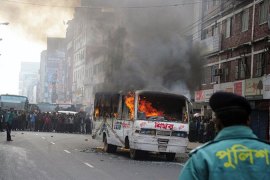 Crude bomb explosion kills one person, as opposition activists clash with police in the capital, Dhaka. 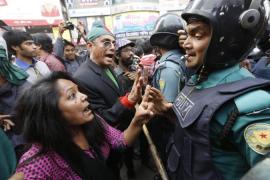 Strikes and blockades have shut down the economy after the execution of Jamaat-e-Islami leader Abdul Quader Mollah.