Kuala Lumpur, Malaysia – Shortly before each plane lands in Kuala Lumpur, as the cabin crew politely ask passengers to put their seats upright and turn off all electronic devices, those on board also receive a chilling warning about “severe” penalties awaiting those found guilty of dealing drugs.

“When policies are not working they should be changed,” Minister in the Prime Minister’s Department Paul Low told more than 300 delegates at a recent Asian Regional Congress on the Death Penalty.

Low, who has responsibility for human rights, noted the numbers sentenced to death for drug offences continue to rise, and Malaysia’s commitment to capital punishment for such crimes made it difficult for the government to argue for a reprieve for its own citizens caught in similar circumstances in other countries.

Legal analysts say it’s important that governments take the lead in moving away from retributive forms of justice.

“Even if there’s high public support for the death penalty, countries that have abandoned it have not waited for their populations to change,” associate professor Chan Wing Cheong, of the Faculty of Law at the National University of Singapore, told Al Jazeera. “They have done it because it’s the right thing to do.”

Over the past 10 years, Asian governments, like much of the rest of the world, have reconsidered the death penalty. Cambodia, the Philippines, East Timor, and Mongolia have abolished it, while others including Vietnam and Singapore have reviewed the scope of the laws surrounding its use. Yet, despite recent progress, Asia remains the continent with the world’s highest number of executions. Many on death row are drug mules.

Blaming the scourge of drug addiction, some countries have resumed executions while others have sent increasing numbers of people to their deaths.

“It’s a policy that governments choose, or do not choose, to embrace,” said Rick Lines, executive director of Harm Reduction International, which researches drug policy and the death penalty.

“The biggest example of that this year is Indonesia. In 2012, we categorised Indonesia as a ‘low application’ country, but this year they have executed 14 people for drugs. It’s not a change of culture or tradition. It’s a change in policy.”

Indonesian President Joko Widodo, who took office in October 2014, says the executions were necessary to show Indonesia’s commitment to fighting the drug trade. Nearly all of those shot by a firing squad – Indonesia’s chosen method – were foreign nationals.

“There is a deeply rooted hatred against drugs [in Indonesia],” said Ricky Gunawan, director of Lembaga Bantuan Masyarakat Hukum, which provides legal assistance to people facing the death penalty. “With this kind of hatred, it’s easy for politicians to use this as a political tool to get sympathy from the public.”

The United Nations says drug offences do not meet the threshold for ” most serious crimes “. Moreover, the mandatory sentence imposed in countries such as Malaysia violates the defendant’s right to a fair trial and due process.

Critics also question the death penalty’s deterrent effect. The Golden Triangle, where Myanmar, Laos and Thailand meet geographically, still produces one-quarter of the world’s heroin , and the cultivation of opium poppies has increased every year since 2006, according to the UN Office on Drugs and Crime. Southeast Asia is also at the centre of the methamphetamine trade.

“Organised crime moves drugs by the tonne,” said Julian McMahon, an Australian lawyer who has worked on death row cases in the region for more than a decade – most recently for Australians Andrew Chan and Myuran Sukumaran, who were among those executed in Indonesia in April.

“It’s intellectually laughable to suggest that the arrest and execution of low-level drug mules will have any effect [on the drug trade]. They are immediately replaceable by any number of similarly stupid young people, too many of whom have been my clients.”

In 2012, Singapore amended some of its laws related to the mandatory death penalty and returned some discretion to the courts. In drug-trafficking cases, the revisions meant those who could prove cooperation with the authorities or were ruled to have diminished responsibility could be sentenced to life imprisonment with caning, rather than the once-mandatory death sentence.

Low said the changes could provide a useful guide for Malaysia as it reviews its own legislation.

“We note that under the amended act, three Malaysians have since been resentenced to life imprisonment,” Low said.

Nearly 1,000 people are believed to be on death row in Malaysia, half for drug offences.

The Malaysian government does not release data on executions or the number of people on death row. The European Union estimates at least three people were executed in 2013 and two in 2014 in the country.

Given the repeated promises of the past few years, the Bar Council – which represents 12,000 lawyers in Malaysia and is at the forefront of the campaign for the abolition of the death penalty – is urging Malaysia to make clear its intentions.

“The first time we heard this announcement was in 2009,” said Steven Thiru, president of the Bar Council. “We can’t have promises repeatedly made. There are a great number of people on death row. It leaves too much uncertainty. There’s a need to decide once and for all.” 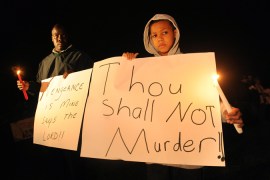