Tens of thousands of Indians have taken part in yoga sessions across India to mark the first ever International Yoga Day.

Narendra Modi, India’s prime minister, who is an enthusiastic practitioner of yoga, himself led one such session in the heart of New Delhi.

“There will be no part of the world that will be untouched by yoga today. Yoga is an everyday part of life,” he was quoted as saying by NDTV news channel.

The central government had drawn up extensive plans to promote yoga on June 21. Modi had set up a new ministry AYUSH for yoga last year.

Indian scholars believe yoga dates back 5,000 years, based on archaeological evidence of poses found inscribed on stones and references to yogic teachings in the ancient Hindu scriptures of the Vedas.

However, Modi’s government has also faced criticism for supposedly turning yoga into a public-relations exercise.

“I, or anyone else, or Congress party leaders and country’s citizens practise yoga at their homes and parks,” Ajay Kumar, a Congress politician, said.

“The chances are that some Bharatiya Janata Party [BJP] leaders have taken this yoga day as a marketing and advertising tool.”

Ajaz Ashraf, a novelist and columnist, told Al Jazeera that “what the [Indian] opposition is talking about is essentially politicisation of yoga”.

“Apart from fact of the commodification, in India it’s wedded to the idea of cultural nationalism in a certain sense,” he said.

“Yoga has undergone through a process of secularisation over the decades and now what are you doing is linking it with particular culture and party. And that’s a big problem.”

In his maiden address to the UN General Assembly, Modi proposed the idea for a day dedicated to the ancient Indian discipline, prompting the UN to proclaim June 21 as the International Day of Yoga.

While people in 650 districts across the nation stretch it out, yoga enthusiasts in 192 other countries are also expected to join in the celebrations, including in Britain where mats will be rolled out along the banks of the River Thames.

Similar events took place in the Middle East, Europe and the Americas.

Greetings to people around the world on 1st International Day of Yoga! Lets pledge to make Yoga an integral part of our daily lives #YogaDay

Sushma Swaraj, India’s foreign minister, who travelled to the UN headquarters in New York for International Yoga Day’s launch in Times Square, has called the craft “the soft power of India” that can foster world peace.

While scores of enthusiasts struck a pose in Times Square, she repeatedly said that yoga has no link to any religion, describing it as “the science of integrating body, mind and soul”.

“At a time when ethnic conflicts and extremist violence are threatening to destabilise societies, yoga can serve as the perfect antidote to …  move us on the path of harmony and peace,” Swaraj said.

However, Ashraf, the Indian commentator, told Al Jazeera: “Repeatedly we are told yoga is good for health, and here is a government which undertook a 20 percent cut in its health allocation in the last financial year.

“Twenty percent is a huge cut given that one-third of the world’s poor live in India.”

“I don’t think celebrating yoga on such a scale is going to help anyone apart from the gurus because it opens a wide market for them.” 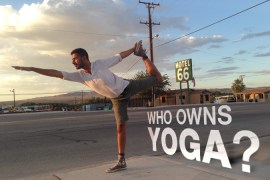 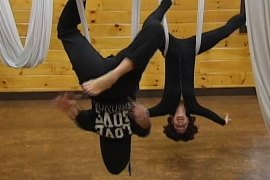 The new workout is said to decompress your back while hanging upside down. 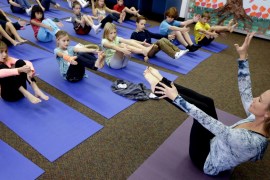 US court rules in favour of school yoga classes

California court finds that yoga is not a gateway to Hinduism and does not violate the religious rights of students.