Malakal, South Sudan – Angelina William hasn’t seen her husband since this city was hit by a fresh wave of attacks in early April.

A soldier in the ranks of recently defected General Johnson Olony, he is now behind rebel lines on the western bank of the river Nile, the 28-year-old mother of three suspects.

“I don’t even know if he is alive,” said William, a member of the Shilluk tribe and one of 30,000 civilians living at the UN Mission in South Sudan (UNMISS) camp for displaced people in Malakal, the now government-controlled capital of oil-rich Upper Nile state.

The most recent clashes, however, broke out within South Sudan’s army, the SPLA, between ethnic Dinka factions and Shilluk forces who back Olony.

The fighting uprooted thousands of civilians living in and around Malakal, just as normal life had started to return to the state capital after months of violence.

“The situation was gradually improving prior to April 1, and people were beginning to think about returning. But when Malakal changed hands again, the situation shifted dramatically,” said Deborah Schein, the UNMISS coordinator in Malakal.

Since April, almost 10,000 new arrivals registered at the UN base, which houses many from the now-deserted state capital.

Many people in the camp are Shilluk, the nation’s third-largest tribe, whose ancient kingdom engulfs the river in Upper Nile state. Food is scarce in the camp, but rations handed out by aid agencies keep families going.

Members of the Shilluk community on the other side of the river are less fortunate.

The Nile – previously the Shilluk’s source of livelihood and a lifeline that brought aid and goods – now has turned into the front-line of fighting. The village of Wau Shilluk is nestled on its western bank, a few kilometres north of Malakal, and has come under rebel control.

Few aid organisations are present in Wau Shilluk, a settlement of about 35,000 mostly displaced people. Last week, three NGOs based in Malakal deployed teams for the first time since mid-May, when they were forced to suspend operations because of frequent artillery shelling across the river.

“The humanitarian access is highly complicated in the area and it has gotten worse because of the fighting. But we are continuing our efforts to reach the most vulnerable as best as we can,” said Lapo Somigli, field coordinator for French NGO Solidarités.

RELATED: The battle for Melut

Though aid agencies are technically guaranteed humanitarian access according to international humanitarian law, they must obtain clearance from both SPLA and Olony’s commanders for boat trips across the Nile to Wau Shilluk.

But given loose command structures and at times a lack of discipline, troops stationed on riverbanks don’t always pay heed to assurances of safe passage given by high-ranking officers.

Al Jazeera witnessed a Solidarités boat being shot at last Wednesday while returning from Wau Shilluk to Malakal.

Residents of Wau Shilluk say until fighting broke out in April, markets were generally well stocked with supplies. But now that trade has dried up, many of the town’s stalls are next to empty. Sorghum, the basic staple, is particularly lacking.

The fallout between the largely Dinka SPLA and Olony’s Shilluk forces has had a ripple effect along ethnic lines through the wider population. Fears of escalating ethnic tensions have prompted members of the Shilluk tribe to seek safety across the Nile, in areas considered traditional Shilluk land.

But those who crossed the river now find themselves cut off from food and at risk of getting caught in the crossfire.

“We are very afraid, there is too much shooting coming to our side,” said John Akwol Chol, a former government employee who fled Malakal when fighting started and now lives in Wau Shilluk.

Olony has yet to declare the wider objectives of his campaign. Insiders describe Olony – who previously led other militias and accepted an amnesty that promoted him to the rank of major-general in 2013 – as a solid military strategist who will seek alliances if useful.

SPLM-In-Opposition (SPLM-IO) spokesman Mabior Garang recently told Al Jazeera in Nairobi that Olony’s forces are loosely allied with Machar’s fighters. “We have a policy of cooperating with any opposition force in the country,” Garang said.

Olony’s commander in Wau Shilluk neither confirmed nor rejected an alliance with the former vice president. “The reason why we moved to the western bank of the river is because the governor’s forces attacked us. We are still part of the SPLA,” said Jacob Kumdaw Bol.

No SPLA commander was available for comment in Malakal.

Many Shilluk say they’ve been caught up in a conflict between the Dinka and the Nuer, the two largest tribes in South Sudan. Many have also lost faith in the SPLA’s ability to protect them, hoping Olony’s forces can do just that.

The two-year-old’s parents were killed in the most recent clashes.

Sheta said she hopes recently resumed peace talks in Addis Ababa, Ethiopia can finally bring peace to the world’s newest nation. But with Olony unrepresented at the negotiating table, analysts questioned how the division that unleashed the current crisis in Malakal can be resolved. 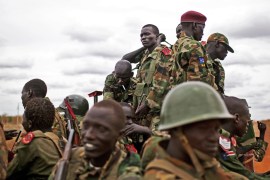