London, United Kingdom – Activists and trade union leaders have called for a general strike and a mass campaign of civil disobedience to bring down the country’s new right-wing government as hundreds of thousands took to the streets of London and other cities to protest against austerity and public service cuts.

Organisers said a quarter of a million people had joined Saturday’s march from the Bank of England to the Houses of Parliament, with smaller protests also taking place in Glasgow, Liverpool, and Bristol, and pledged the event was only a beginning.

“We’ve got to get rid of this government quicker than five years. This government cannot last the full term,” Sam Fairbairn, national secretary of the People’s Assembly, the anti-austerity campaign group that organised the march, told a rally in Parliament Square.

“Today is just the start of a campaign of protests, of strikes, of direct action and civil disobedience up and down the country. We are going to organise the biggest mass movement this country has ever seen, and it is that mass movement that is going to kick David Cameron out of office.”

Cameron, the British prime minister, was re-elected last month after his right-wing Conservative Party gained a small parliamentary majority despite winning just 37 percent of votes cast, and claiming the support of less than a quarter of eligible voters.

The Conservatives say extensive cuts are needed to bring the UK’s welfare budget and national deficit under control.

In an article on Sunday in the Sunday Times newspaper, George Osborne and Iain Duncan Smith, the government’s finance and work and pensions ministers, said they would announce measures next month to reduce the UK’s welfare expenditure by 12 billion pounds ($19bn) a year.

“It took many years for welfare spending to spiral so far out of control and it’s a project of a decade or more to return the system to sanity,” they wrote.

But critics say the government lacks a mandate for widely unpopular and controversial plans that include reforming the UK’s publicly funded National Health Service and imposing deep cuts on already squeezed public services.

Marchers carried banners and placards reading: “They cut, we bleed” and “Homes not Trident”, a reference to the UK’s nuclear deterrent which is due for renewal next year at an expected cost of tens of billions of dollars.

Other campaign groups called for the reform of the UK’s asylum and immigration system, measures to tackle the UK’s social housing crisis, and an overhaul of surveillance and privacy laws.

“They are letting down the poorest people in society,” Lee, an IT worker from London, told Al Jazeera. “This is about making our voices heard and letting them know that half the country is still really disappointed about what [the Conservatives] are doing.”

Afham Ismail, an asylum seeker originally from Sri Lanka who has been living in the UK for 11 years, told Al Jazeera he was attending the march to show solidarity with housing activists who had helped his family when they were evicted from their home in East London.

Ismail said he and his wife had worked as teachers but had lost their jobs and their home when their circumstances changed and their work permits were rescinded by the Home Office. He said his family was now homeless and staying with friends.

“It is just an excuse to exploit ordinary people and to ensure that the people in power continue to prosper at the expense of everybody else,” said Susan Ryan, carrying a placard reading “Austerity is a con!”

Estella Moreno, an 18-year-old from Luton in southern England, told Al Jazeera many young people had lost faith in a political system that no longer offered them any hope for the future.

“People are angry. The cuts are hurting a lot of people, and our democracy system is a joke,” she said. “I have not been able to find a job that is not zero hours contract or minimum wage, and that is the same for thousands and thousands of young people in this country.”

Addressing Saturday’s rally, union leaders called for a general strike to “stop austerity in its tracks”, and also issued a warning to the government over its plans to restrict the rights of trade unions to strike.

“A majority in the House of Commons [for the Conservatives] will never legitimise the ravishing attacks on the disabled, the elderly, the sick, those in precarious work and those out of work,” said Len McCluskey, general secretary of Unite, the UK’s largest trade union.

The rally also heard a message of solidarity from Syriza, the ruling party of austerity-emaciated Greece, currently locked in a struggle with the country’s creditors over its refusal to buckle to their demands for further cutbacks.

“Greetings from Syriza. Greetings from the first left government in Europe that is fighting austerity. We are fighting for democracy and social justice. Make no mistake, we are at war and the front line is Greece,” said Marina Prentoulis, a university lecturer and Syriza party member.

Some activist groups attending Saturday’s march complained that they had been targeted by the police in the run-up to the event, with several individuals who had been arrested at previous protests issued with bail conditions banning them from attending.

Mya Pope-Weidemann of Brick Lane Debates, a radical activist collective, said several people affiliated with the group had been banned from attending the march, though none had been charged with criminal offences.

Lisa McKenzie of Class War, an anarchist group, said she and others had been subjected to “general intimidation”, while squatters occupying a central London office building claimed their eviction on Friday had been fast-tracked because of the protest.

“What we have seen in advance of the June 20 demo is a crackdown on the most radical elements of the youth movement. It is absolutely disgusting that people have been banned from exercising their democratic right to peacefully march,” Pope-Weidemann told Al Jazeera.

But she said organisers and activists had been heartened by the large numbers on the streets and said the event had “breathed new life” into the protest movement.

Despite a heavy police presence along the route and the failed efforts of a small group of black-clad anarchists to lead a breakaway from the main march, Saturday’s rally dispersed chaotically but peacefully under rainy skies, with no repeat of last month’s angry clashes outside Downing Street.

In Parliament Square, a few determined protesters hauled themselves up onto the statues of Winston Churchill and other dignitaries, while some made a bonfire of discarded placards and others scribbled expletives onto the boarding erected to protect the military monuments on Whitehall, the main street running from Trafalgar Square towards the Houses of Parliament.

Further down, as the booming bass of an anarchist sound system and dancing crowds filled the street, two men in dinner jackets crossed the road nervously, heading in the opposite direction. 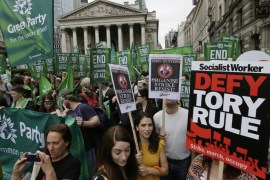 Thousands take to the streets to demonstrate against the newly-elected government’s plan for spending cuts. 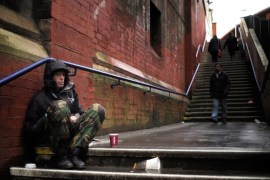